A Forgotten SF Novel: The Super Barbarians, by John Brunner

Here's a very minor part of the John Brunner canon. I am, as I've mentioned before, quite fond of early John Brunner: generally unpretentious and fun stories, usually with pretty decent central ideas, fast-moving (often too much so in the conclusion). No doubt Brunner's later, more ambitious, work is of more lasting quality -- and don't get me wrong, novels like Stand on Zanzibar really are good! -- but the stuff he produced at speed early on is still worth a look. 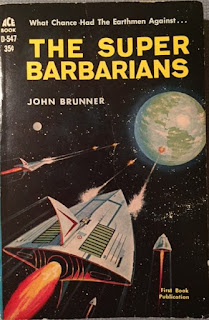 Brunner was born in 1934, and wrote his first novel (Galactic Storm, as by "Gill Hunt") when only 17. He served in the RAF for a couple of years, and turned to full time writing in 1958. He was enormously prolific, averaging about four novels a year through the early and mid 1960s. Even as his novels grew longer and more ambitious, he still published multiple books most years until about 1975. He slowed down quite a lot around then, as his health worsened, and as he tried for success in the broader literary market, particularly with his 1983 novel The Great Steamboat Race. He died at the World Science Fiction Convention in Glasgow in 1995.

The Super Barbarians is surely one of his least well-known novels. It was published by Ace, a single novel, in 1962. I know of no prior serialization. It does not seem to have been reprinted until a ebook edition from Gateway/Orion in 2011.

Gareth Shaw is an Earthman working as a servant to the senior wife of Pwill, the head of one of the leading Houses on Qallavarra, the home planet of the alien Vorra, who subjugated Earth a half-century before. Shaw got the job back on Earth, where he had attempted to tutor the foolish heir of Pwill. He hadn't done much good there -- the young Vorra was too undisciplined -- but he made an impression on the boy's mother. Hence the plum job. As the novel opens, he accepts a commission from one of Pwill's younger wives -- to go into the "Acre", the small area reserved for Earthmen on Qallavarra. She wants a love potion, and humans can supply it.

Which suggests the fundamental question here -- the Vorra conquered Earth (though not without a fierce battle), but except for their spaceship tech, they are extremely backward -- the rest of their tech is at Middle Ages level more or less, their medical science is similarly weak, etc. etc.

Shaw is surprised to encounter vicious hostility from the Vorra as he enters the Acre, and similar hostility from the humans he meets once within. It seems he is regarded as a Quisling of sorts. But he completes his task -- and, as hazy memories begin to return, he becomes something of a human partisan.

And so the book continues -- Shaw slowly realizes his true situation, and humanity's true situation. And he manages to conspire effectively, with the unwitting help of the foolish Vorra, especially the younger Pwill, who, it turns out, is desperately addicted to coffee. Shaw is able to help the younger wife in her plotting -- which of course also aids the human cause, not that she realizes this. And along the way he stumbles across the central secret -- easily enough guessed! -- concerning the source of the Vorra space traveling technology, which slingshots to a nicely scary future threat humans must face.

This really is pretty minor work. It's efficiently executed, and I enjoyed reading it. Brunner really is a reliable entertainer. But, except for a bit right at the end, it is never as interesting and thought-provoking as even the early, more slapdash, Brunner novels usually managed. The Super Barbarians isn't bad work of its kind -- but it is nothing more than typical work of its kind.
Posted by Rich Horton at 5:26 PM