Old Bestseller: She Painted Her Face, by Dornford Yates

Old Bestseller: She Painted Her Face, by Dornford Yates

I don't know how well this book sold, but though Dornford Yates may not have ever produced a massive bestseller, he wrote a lot of very popular books in two separate popular genres: Wodehousian comedy about the antics of rich people, and thrillers.

"Dornford Yates" was the pen name of Cecil William Mercer (1885-1960). His pen name combines the maiden names of his two grandmothers. Mercer was an Englishman, the first cousin of the somewhat more famous writer Saki (real name H. H. Munro). He was trained as a lawyer, and practiced for a few years (he was involved in the trial of the notorious murderer Crippen). He served in the Army (or Yeomanry) in World War I, and after the war concentrated on writing (he had published a number of short stories (and one collection) beginning in 1914). He married an American dancer in 1919 (at which time he also had an unsuccessful stage play produced). They divorced in 1933, and he remarried a year later. He had moved to France in 1920, and with the coming of the Second World War moved to Rhodesia.

Yates wrote primarily in two series -- the "Berry" books are the sub-Wodehousian comedies, mostly consisting of collections of linked stories. The Chandos books (which are technically linked to the Berry books by a couple of shared characters) are thrillers set mostly in Europe.

The book at hand, She Painted Her Face, belongs to neither series, though it is a pure thriller, and as such resembles the Chandos books. It is set mostly in Austria, but it has a distinctly Ruritanian flavor, and it might be noted that Yates also wrote a couple of purely "Ruritanian-Graustarkian" books, set in the fictitious Principality of Riechtenburg. The title is from the Bible, 2 Kings 9:30, about Jezebel just as she is to be killed. I don't think Yates really intended that passage to be significant, actually. The woman in the novel who paints her face is a very admirable character, and does not get trampled under foot, or killed in any way. 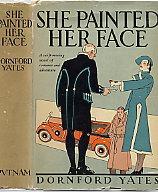 My edition is the American edition, from G. P. Putnam's Sons in 1937. The book was first serialized as "Counterfeit Coin" in 1936, I'm not sure where. The true first was put out by his usual publishers, Ward Lock.

The novel is told by Richard Exon, an Englishman of good family who falls on hard times after his parents die and his trustee gambles away his estate. Living in poverty, in Red Lead Lane, he meets and befriends an older man, Matthew Gering. When Gering dies, he leaves Richard a secret -- Gering was in fact an aristocratic Austrian, the Count of Brief, but his dastardly twin brother had framed him for a crime he (the twin) had committed, and taken over his identity. "Gering"'s wife had died, and thus his daughter is left in the custody of her evil uncle, impersonating her father. And the uncle has a son of his own. But Gering is in possession of the Secret of Brief, which he is on the verge of revealing to Richard when he expires.

Fortuitously, Richard is soon after restored to wealth when a rich uncle of his own dies. He isn't sure what to do about Gering's secret until he meets, by pure chance, one Percy Virgil, whom he learns is actually the evil nephew of the Count of Brief. Richard becomes convinced that he must travel to Austria to do what he can to discover the Secret of Brief and make sure that Gering's daughter, Elizabeth, is kept safe from the machinations of Percy Virgil and his father. Richard soon gains the help of another man, John Herrick, and of Virgil's ex-servant, Winter, who was only too glad to abandon his former master. (One of the ways Richard realized how evil Percy Virgil was was seeing him mistreat his servants -- the other was, naturally, his close-set eyes.)

You can see where this is going -- it won't surprise anyone that Lady Elizabeth Virgil, rightly the Countess of Brief, is supernaturally beautiful, and that she and Richard will fall desperately in love. But first Richard and John must rescue her from an attempt by Percy at murder. Shortly thereafter they sneak into the Brief castle to use the slim clue Gering had given Richard to ferret out the Secret of Brief. This is surprising and scandalous -- and it gives them a lever to visit Elizabeth's delightful old relative Harriet, the Duchess of Whelp, whom she calls Old Harry. Old Harry agrees to help them expose the evil fake Count, but she extracts Richard's promise that he will never marry Elizabeth -- you see, his birth is not high enough to marry a Countess.

And so follows more desperate adventure -- a couple more attempts on Elizabeth's life, and indeed on John's and Richard's lives; exposure of Elizabeth's traitorous maid (an English woman wanted for having had an abortion); a battle in a deep well; Richard discovered leaving Elizabeth's chambers (a scandal itself) ... and, finally, after all is won, Richard having to leave Elizabeth, as he promised. But will she stand for this? (What do you think?)

It's all ridiculous guff, of course. And terribly classist (with a mercifully tiny tinge of anti-Semitism). And built on coincidence and implausible acts. And based on the villains (and oh are they ever villainous!) acting in silly ways when necessary. But you know what -- that's all part and parcel of this sort of book. And no matter how silly it is, it's really quite a lot of fun. The romance between Richard and Elizabeth is wholly cliche in presentation, but it manages to be almost believable, and even a bit sexy. (There is, of course, no actual sex.) Old Harry is really a delightful character. The telling is lively, sometimes funny, often thrilling. This is a book purely of a familiar type -- but it is quite a good example of its type.

For all that it is interesting -- and disquieting -- to think that the main characters are left, at the end, in Austria in 1936, ready to take up a life there -- as the Second  World War impends.
Posted by Rich Horton at 7:11 PM