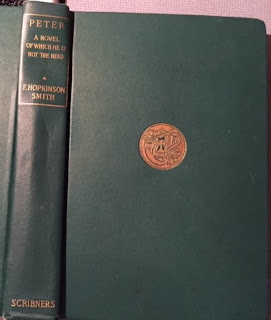 Here's a very true Old Bestseller -- this novel was published in 1908, and was 8th on the Publishers' Weekly list of the top ten sellers of that year, and again 9th in 1909. And the author had the top sellers of 1896 (Tom Grogan) and 1898 (Caleb West). Tom Grogan seems particularly interesting -- about a woman whose husband dies, and who then dresses as a man and does his work in order to keep earning his paycheck.

Francis Hopkinson Smith (1838-1915) was a true polymath. He was a renowned civil engineer (perhaps most famously building the foundation for the Statue of Liberty, and the Race Rock Lighthouse). He was a major artist, noted mostly for landscapes done in charcoal or watercolor. He was a descendant of Francis Hopkinson, one of the signers of the Declaration of Independence. And of course he was a prolific novelist, writer of multiple bestsellers, beginning with his first successful novel, Col. Carter of Cartersville (1891). He had a reputation as a chronicler of the Old South, but I should note that none of the other bestsellers I mention -- Tom Grogan, Caleb West (about the building of the Race Rock Lighthouse), nor Peter, are particularly about the South. Autobiographical elements did creep regularly into his novels -- as with Caleb West, as already noted. Also, The Fortunes of Oliver Horn deals with the artist life, and portrays versions of a number of Smith's artist colleagues, and a number of Smith's heroes (including the hero of Peter) are natives of Smith's own home state, Maryland.

Peter was first published in 1908 by Charles Scribner's Sons. My edition is also from Scribner's, a 1913 reprint. There are four illustrations by A. I. Keller. 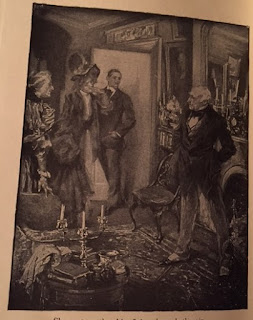 The novel is subtitled: "A Novel of Which He is not the Hero". It opens in New York, with the narrator, or Scribe, called only the Major, coming to Peter Grayson's worksplace, a distinguished old bank, the Exeter. Peter is about 60 years old, a teller. He is a bachelor, and he has a maiden sister, Felicia. The time is late in the 19th Century. The first couple of chapters slowly introduce Peter and his morals -- his belief in honest work, his devotion to his modest job, and the respect he is held in by numerous people. Peter and the narrator make their way to Peter's apartment, where they find an invitation to a party given by the architect Holker Morris for his employees. (It has been suggested that the character Morris was based on the famous architect Stanford White, a friend of Smith's, who had been murdered in 1906 by the husband of Evelyn Nesbit, an actress and one of the Gibson Girl models, who had apparently been seduced by White while only 14 or 16 (her birthdate is in question). I should add that the portrayal of Holker Morris in Peter gives no suggestion of White's scandalous history.) At Morris' party, he awards a prize to Garry Minott, a young star at the firm. Peter, however, is more impressed with Garry Minott's friend, John Breen, and he decides to take an interest in him.

Breen is an orphan, who has been taken in by his uncle, Arthur Breen. John (or "Jack") is working in his uncle's financial firm, but he has become concerned over what he thinks are potentially shady dealings -- nothing illegal, but immoral. The last straw comes when an acquaintance is ruined due to Arthur's maneuverings. Jack is also slightly importuned by Arthur's stepdaughter, Corinne, a vaguely pretty but spoiled girl who seems to regard Jack as her rightful property. And as Jack grows closer to Peter Grayson, he is offended that Corinne -- and Garry Minott, who has begun to see Corinne socially -- seem unimpressed, to the point of rudeness, with the old man. With some subtle prompting by Peter, Jack quits his uncle's establishment, leaves his house, and looks for a job -- eventually finding one with the engineer Henry MacFarlane -- who, as it happens, has a beautiful daughter, Ruth, whom Jack had met and been entranced by at a party given by Peter and his sister Felicia.

The story begins to jump forward, with Jack Breen beginning to do good work for Henry MacFarlane, and beginning to get closer to Ruth. Peter Grayson stays in contact, and so does his sometimes meddling sister Felicia. Ruth and Jack are clearly in love, but Jack's pride stands in the way of marriage. Then a dramatic disaster threatens Henry MacFarlane's life and livelihood, and Jack is instrumental in saving the day. Meanwhile, Garry Minott has married Corinne and started his own business.

Jack and Ruth finally plight their troth, but they need to wait to get married until Jack is financially able. He does have one piece of property, though it is apparently worthless. Arthur Breen also has an interest in a neighboring property. And Garry and Corinne's marriage seems troubled -- Garry is under a great deal of stress. Things come to a head with a melodramatic suicide, and a noble effort by Jack to save his friend, or at least his friend's reputation. Arthur Breen again proves his moral weakness, and also his stupidity -- and Jack is helped at the last minute by an unexpected agent -- Peter Grayson's friend Isaac Cohen, a Jewish tailor. Jack is given a lesson in the wrongness of his reflexive anti-Semitism, but things turn out, in a slightly deus ex machina fashion, quite wonderfully ...

This is by no means a great novel, or even a very good one, but it's not a bad read. There is one point to make -- this book was published 3 years after Edith Wharton's great novel The House of Mirth. Wharton's novel is almost infinitely better -- but it is noticeably accepting of its period's anti-Semitism, and Smith's novel is quite pointedly critical of that attitude. There is another point of connection with The House of Mirth -- each novel features a slightly ambiguous suicide, by the same means (chloral hydrate).

Peter Grayson, as noted in the subtitle, is not officially the "hero" of Peter, but he is the linchpin: a highly moral character, dismissive in particular of those who lust after money. He is a good friend to Isaac Cohen, even as his whole set (including his beloved sister Felicia) automatically reject him due to his religion. Peter is certainly an implausibly saintly character, but he's interesting and someone we like. Ruth and Jack are also implausibly wonderful people, but that's the way this sort of novel goes.

There are noticeable details that reflect Smith's own life. Henry MacFarlane, the engineer, surely resembles that aspect of Smith to a degree. There is a short section discussing artists that seems to comment on Smith's views of art, and his place in the art world. None of this comes off as tendentious -- rather, Smith's clear knowledge of both milieus gives the book a certain believability. Once again, this is a novel that seems quite plausibly a bestseller of its time -- but not a novel that especially demands our attention over a century later.
Posted by Rich Horton at 8:50 PM