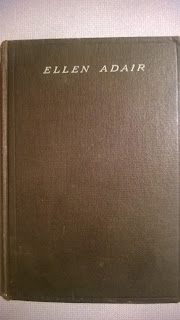 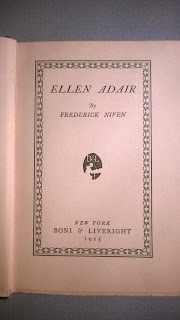 Here's a truly obscure book that likely was not a bestseller of any sort, though the writer did have a modest reputation in his day. He was regarded, it seems, as a writer of fairly serious intent, and he does seem still to be remembered in Canada as a fairly significant early writer of the Canadian West -- "British Columbia's first professional man of letters" one article says.

Frederick Niven, like his very near contemporary John Buchan, was a Scottish writer who ended up in Canada, and as such is claimed by both countries. Buchan has never struck me as very Canadian at all, spending only his last five years there, and as far as I know writing very little if any fiction set there. But Niven, who was born in in Chile in 1878 to Scottish parents, and lived in Scotland from a very young age, spent several years in Canada in his early adulthood, and moved permanently to British Columbia in 1920, for his health. He died in 1944. A number of his later novels were set in Canada, mostly historicals, while most of his Scottish novels are set in his present day, more often in his true home town of Glasgow, but in the case of Ellen Adair in Edinburgh.

Niven spent some time writing for the Glasgow Weekly Herald and other papers as a young man, often writing about Western Canada. He was not able to fight in the Great War due to health, but he did write for the Ministry of Information, similar to other writers I've covered like Buchan and, as I recall, Anthony Hope. Writing appears to have been his only profession.

Ellen Adair was first published in 1913. My edition seems to be the first American edition, and it came out in 1925 from Boni and Liveright. It is set in the early 20th century, in Edinburgh. It opens with the title character at her very first dance. We quickly gather that she's pretty, and lively, and very flirtatious. She has an older sister, Louise, who is rather more serious and studious than she, and an older brother, Tom, who doesn't play much of a role besides introducing the girls to various friends and acquaintances, for both good and ill. She also has an admirer, Jimmy Ray, who works at his father's jewelry store -- but she seems contemptuous of his attentions.

Ellen's father is of humble origins, and has a modest job as a porter. Her mother is ashamed of her husband's position, and accent, and even his church, and has worked to improve all those things -- by misrepresenting his job to her friends, by insisting he abandon his accent, and by insisting they leave the Methodist church for something more socially respectable (Church of Scotland, I suppose).

At first the story seems likely to be a coming of age story -- Ellen will have a couple of love affairs, treat some people poorly, but grow up and come to her senses and marry, perhaps, Jimmy Ray. But we soon realize that she's not just careless, but rather stupid, and cruel, and not at all interested in learning better. Indeed, after a while it seems like she might be called Lydia, and her mother might be Mrs. Bennett. (Louise, I suppose, might be seen as a combination of Jane and Mary Bennett. There is no Elizabeth on hand.) Ellen gets a job at a used bookstore, typing up catalogs, but instead of helping out at the shop when not busy typing, she turns away customers and flirts with the other assistants, eventually causing one to be dismissed by lying about his actions; and causing another to leave on his own. Her career only gets worse -- she is dismissed, then takes up with a rather nasty seducer, against Louise's insistence but with the unfortunate implicit approval (very Mrs. Bennett-like) of her mother -- and the inevitable occurs.

The ending sequences are quite melodramatic (a weakness of Niven's, reviews suggest). Up until then, though, it's a pretty well-written book, with fairly believable and well-depicted characters, solid dialogue, and convincing descriptions of Edinburgh life. Of course Ellen's fate is unfair to a considerable extent, and the result of a sexist society -- but it's also the result of quite real and convincing faults in her character (and that of her mother; and to be sure a father who would not stand up to his wife's pretensions). It's not a particularly special novel, but it's nicely enough done -- a solid example, I suppose, of a decent piece of somewhat moralistic midlist fiction.
Posted by Rich Horton at 9:29 PM