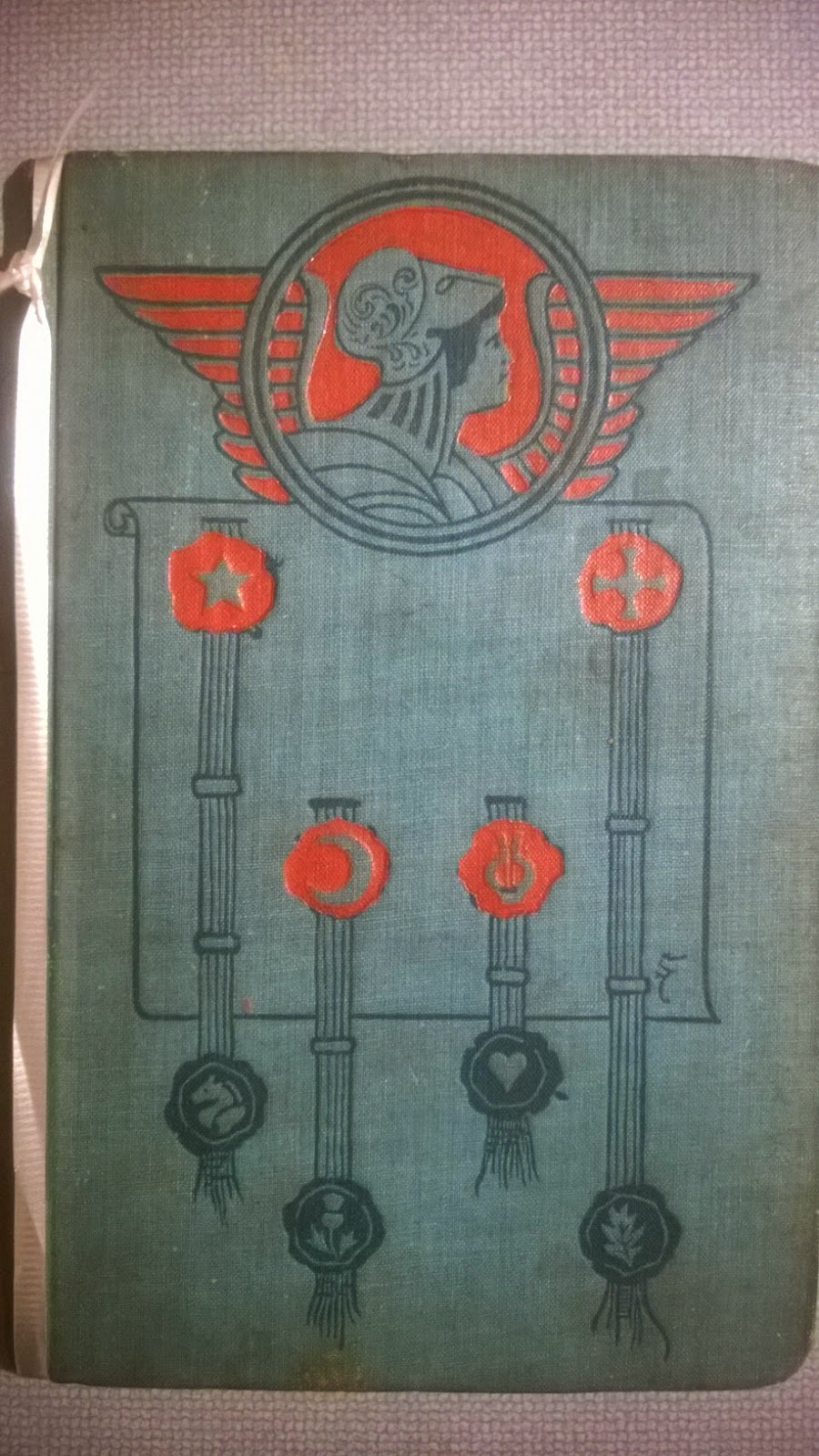 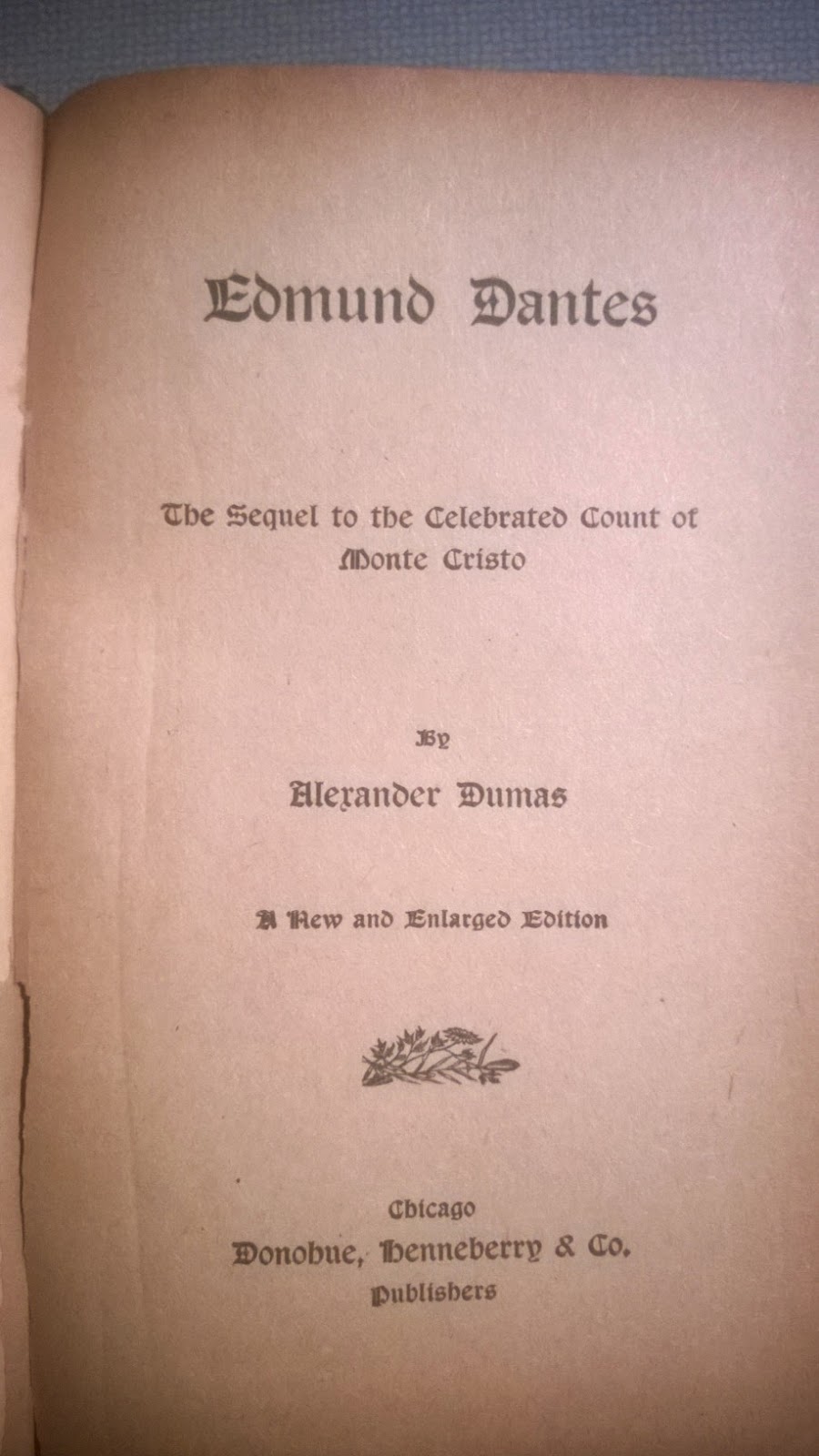 A short while ago in an antique store I saw this book, Edmund Dantès, subtitled "The Sequel to the Celebrated Count of Monte Cristo", bylined Alexander Dumas. I haven't read much Dumas ... The Three Musketeers, when I was a teen, might be the only one. I know the story of The Count of Monte Cristo, of course, and I've seen a couple of versions in other media. I knew Dumas was prolific (and that he ran a sort of fiction factory, a bit like James Patterson does these day), so I thought it very plausible that he might have written a sequel. So I bought the book ... seemed like a worthwhile thing to try, an obscurer work by a famous author.

Alexandre Dumas was born in Picardy in 1802. His father was born in Haiti, the illegitimate son of a Marquis and a slave woman. His mother was an innkeeper's daughter. Dumas was his grandmother's family name, adopted by Alexandre's father after a break with his noble father. Alexandre's father was a successful general under Napoleon, but died of cancer in 1806. Dumas's family connections got him a decent position with Louis-Philippe, future King of France. Dumas soon began writing articles and then plays, and after a couple of successes became a full-time writer, and turned to novels. His most significant works appeared in quick succession between 1844 and 1847: The Three Musketeers and its sequels; The Corsican Brothers, and The Count of Monte Cristo. Dumas died in 1870.

Dumas was known, as I said, for running a sort of fiction factory: a variety of assistants helped write his books. The most famous was Auguste Maquet, who suggested the plots and wrote first drafts for a number of Dumas's novels (including The Count of Monte Cristo and The Three Musketeers). Dumas would then rewrite the books, adding dialogue and details and presumably finishing the prose. Maquet later sued Dumas, asking for credit and more money. He got the latter.

But what of this novel, Edmund Dantès? I began it with some optimism, and the opening is at least mildly interesting. Dantès and his beloved Haydee are sailing to Dantès' private island, where they get married and have a boy and a girl. Some ten years later, though, brigands led by one of the men Dantès ruined in his thirst for vengeance attack his house, and kill Haydee. Edmund and his children return to France. And suddenly the novel becomes a political novel. Edmund becomes a representative for Marseilles, and a leading Republican advocate, inveighing against the injustice of the political structure. He writes a popular play. The revolutions of 1848 are approaching ... And this goes on and on, at boring and very tiresome length.

Not much else really happens. There is a bit of a subplot involving his daughter and her love affair with an Italian, which seems doomed to failure because her brother swears that the Italian is a villain (apparently, or so her brother thinks, he kidnapped and raped a peasant girl). Alas, this story is not resolved in the book -- instead, in the last pages, we are directed to another sequel (The Countess of Monte Cristo). There is a trival subplot in which Dantès becomes very ill and is nursed to life by the very woman who had rejected him in The Count of Monte Cristo.

So anyway ... as the book went on -- really, from very early -- I was thinking, "My gosh, this is awful stuff. Can it really be by Dumas?" At first I thought, maybe it's a bad translation. But no translator (well, maybe the Swedish translator who rewrote sections of Last and First Men to make Stalin win) could make a good book THAT bad. So then I thought, maybe it was a product of Dumas's "factory" that he didn't really pay much attention to. But that's not how Dumas worked. Besides, Dumas was an ally of Louis-Philippe, the King who was deposed in 1848, so I doubt he'd have written a book promoting the February revolution. (And indeed Dumas had to go into exile after Louis Napoleon took over, later in 1848.)

So I did some more investigating, and finally found the truth ... There have been, in fact, a number of sequels to The Count of Monte Cristo, by various writers, probably none of whom got permission from Dumas or paid him anything. This particular one is by an American named Edmund Flagg (1815-1890). It seems to have been first published in 1878, though my edition is dated 1884. Flagg actually wrote two sequels to this book: Monte Cristo's Daughter (1880) and The Wife of Monte Cristo (1884). I suppose perhaps Monte Cristo's Daughter reveals the conclusion to the sublot about his daughter's love affair with the Italian nobleman, though perhaps also it is in the book mentioned in the text, The Countess of Monte Cristo, which was by Jean Charles du Buys, published in 1869.

In the end, then, I was another, very late, victim of a fraud perpetrated some 140 years ago. A look at the Amazon reviews, as well as the Goodreads reviews, of Edmund Dantès, by the way, will reveal that I'm not the only contemporary reader to be quite disgusted by this book. But all in all it's an interesting story of the publishing world of the past (and of American copyright laws, which were quite lax in the 19th century -- nowadays, if anything, they are too strict, at least since Disney took over the job).
Posted by Rich Horton at 6:55 PM