Old Bestsellers: The Adventures of Richard Hannay, by John Buchan 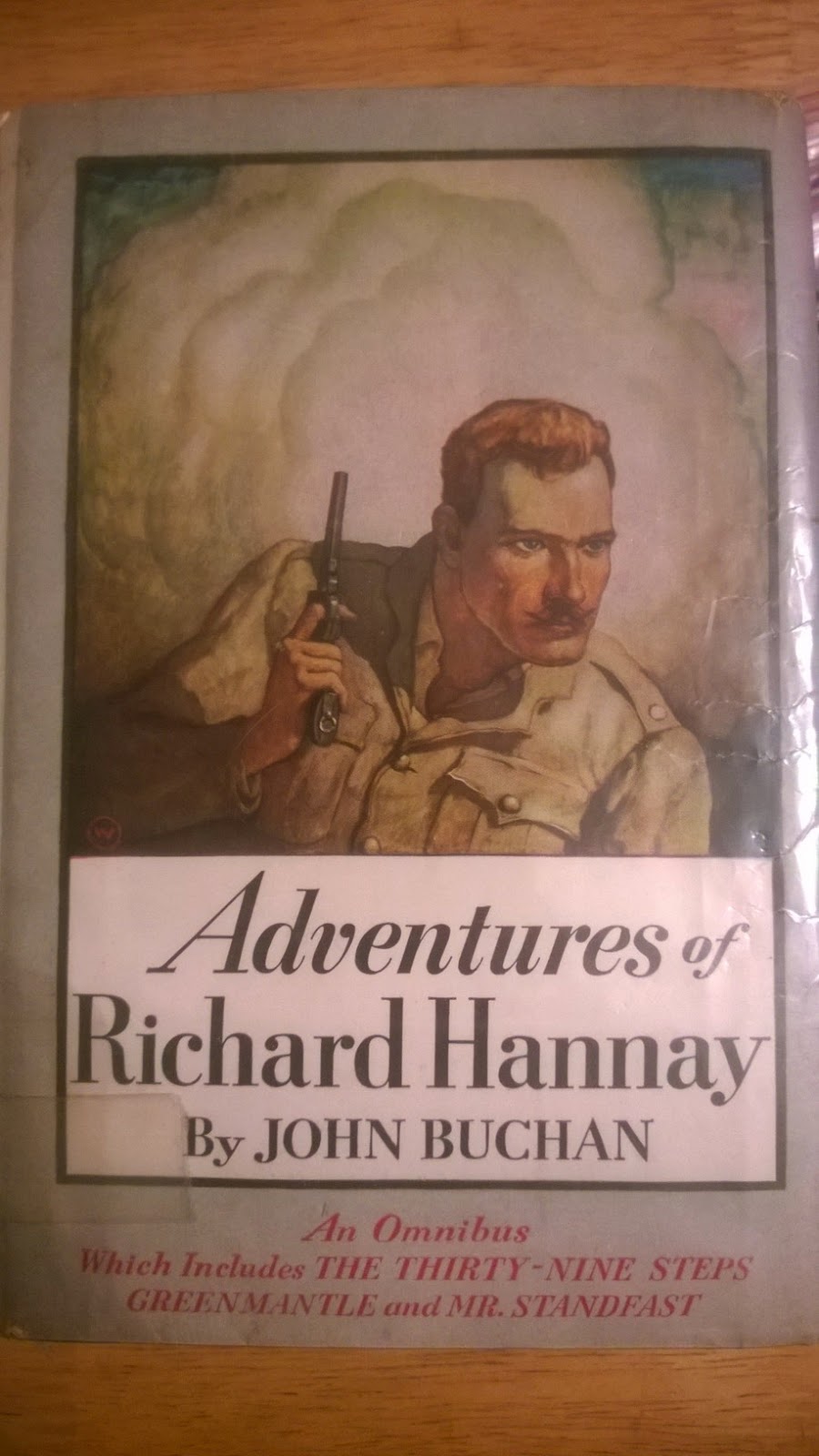 The Adventures of Richard Hannay, by John Buchan

John Buchan (pronounced, apparently, Bucken, instead of Bewcan as I had always thought) is primarily remembered these days for one short novel, published almost exactly a century ago (in 1915): The Thirty-Nine Steps. The book I am considering here is an omnibus (published by Houghton Mifflin) of that novel and its first two sequels, Greenmantle (1916) and Mr. Standfast (1919). The form of the book is curious: the three novels are bound together in what appear to be the original plates of the standalone books. Each novel is much longer than its predecessor: The Thirty-Nine Steps is about 35,000 words, Greenmantle about 90,000, and Mr. Standfast about 120,000. So each novel is printed in a different font: the first quite large, the second normal, and the last smallish. This particular edition seems to have been put out not long before the Second World War, probably not long before Buchan died.

Buchan was born in Perth, Scotland, in 1875, son of a Minister in the Free Church of Scotland. He was educated at Oxford, and entered government service upon graduation, first working in South Africa. By this time he had already published four novels. Upon his return to England he joined the publishing firm of Thomas Nelson (which eventually became the now prominent American Christian publishing firm, though not entirely directly). He also studied law and passed the bar. Buchan married in 1907. He became a Member of Parliament, served with some distinction in the First World War (though not in combat), and continued a prominent career after the war, returning to Parliament and also lecturing and otherwise maintaining involvement with several Scottish universities. In 1935 he was appointed Governor General of Canada (as a result of which he is often considered a significant figure in Canadian Literature, which seems a bit of a stretch), and at the same time he was made the First Baron Tweedsmuir. Throughout this time he continued writing, publishing some 27 novels in all. He died in 1940. Quite an impressive career, really.

The three novels in this omnibus form what could be called a World War I trilogy. The Thirty-Nine Steps is set in the early summer of 1914, in England and Scotland, in the runup to the War. Greenmantle is set in winter 1915/1916, mostly in Germany and Turkey. And Mr. Standfast covers the period from late 1917 to the middle of 1918, with major episodes in Scotland, Switzerland, and in France (during the crucial turning back of a major German offensive aimed at Amiens). All are narrated by Richard Hannay, a Scotsman who has spent much of his life in South Africa. He is a Major in the first book, a Colonel in the second, and a Major General by the end. Buchan wrote two more novels (The Island of Sheep and The Three Hostages) featuring Hannay as the main character, and he appeared in smaller roles in other works.

The Thirty-Nine Steps is easily the most famous. Hannay, at loose ends in London, encounters an odd American named Scudder who claims to have stumbled on a dangerous conspiracy aimed at murdering a Greek politician, but who is suddenly murdered, leaving Hannay as the prime suspect. Hannay flees to Scotland, partly because of hints that Scudder gave him, hoping he can track down the conspirators, even though he cannot even read Scudder's encoded journal. The bulk of the book is an extended chase scene, or series of chase scenes, quite exciting and imaginative stuff, with Hannay repeatedly disguising himself as characters of various nationalities, and barely escaping both the police and the conspirators. He finally comes up with sufficient evidence to take to the government, and to organize an effort to capture the bad guys, the only clue being Scudder's mention of "thirty-nine steps".

This book has been treated very well in the theatre, in movies, on TV, and on radio. The most famous adaptation is Alfred Hitchcock's 1935 movie version, one of Hitchcock's greatest early films. This starred Robert Donat and Madeline Carroll, and it differed quite significantly from the novel. The best of the other versions, to me, is a comical theatrical adaptation, first staged in 1995 and significantly revised in 2005. Its plot is a combination of Buchan's original and Hitchcock's adaptation, though it has a lot of fun throwing in references to other Hitchcock movies. I have seen a local production, and it is thoroughly delightful.

Greenmantle was published just a year after The Thirty-Nine Steps, only months after the action it depicts. Here Hannay, now serving in France and Belgium, is called back to London for a dangerous mission: it seems that the Germans are planning to use an Islamic prophet of sorts to help cause trouble in the Middle East. Hannay and three companions: his old friend from South African, Peter Pienaar; a dyspeptic American named John Blenkiron; and a fellow military man and good friend named Sandy, must find their separate ways to Istanbul, trying to figure out who this mysterious prophet might be. Again much of the novel is chase scenes, particularly in Germany, where Hannay, disguised as a disaffected Boer, manages to fool some important Germans, including a certain Colonel Stumm, and the beautiful, mysterious, and evil Hilda von Einem, into taking him part of the way to his destination, before he is discovered. In Istanbul he runs afoul of a prideful Turk, and ends up along with his friends in the middle of a pitched battle at Erzerum. (This is in fact one of the key battles of World War I.) Again, pretty exciting stuff, and Blenkiron in particular is a neat character.

Finally, in Mr. Standfast, Hannay is again unhappily taken from his command in Europe and sent to hunting spies. He begins by trying to find out who the real bad guys are in a nest of silly pacifists (to his disgust, pretending to be a pacifist himself) ... and discovers to his horror that one of them was one of the conspirators from The Thirty-Nine Steps, a master of disguise himself. Another mission to Scotland (particularly the Isle of Skye) leads him to one of the communication depots of the spies, but he is unable to get enough information to truly stop them. Meanwhile he has met and fallen for a beautiful girl, at 19 less than half his age, one Mary Lamington. The story continues to Switzerland and a reunion with Peter Pienaar, who has been crippled flying a warplane. The mission is to finally trap the master spy, with Mary as the bait ... and after that episode, we proceed to France, and a not badly done description of one of the most desperate late battles of the War. So this too is a gripping adventure story, with chase scenes and desperate escapes, masters of disguise, and even a scene where the villain gloats over the hero, and forbears to kill him, trusting that he cannot escape certain death anyway. It's also a fine love story, and a pretty good war story.

I've given these novels shortish shrift, but they are all very good fun. It should be added that Buchan had at least his share of the prejudices of the time: there is some casual anti-Semitism, the attitudes towards black people are, I suppose, what you might expect from a South African of that period, and the treatment of Germans is almost silly in its caricature. But if you can ignore that, or calibrate it to the attitudes of that day, these are three very fine adventure stories.
Posted by Rich Horton at 9:32 PM