Old Bestsellers: The Woman in Question, by John Reed Scott 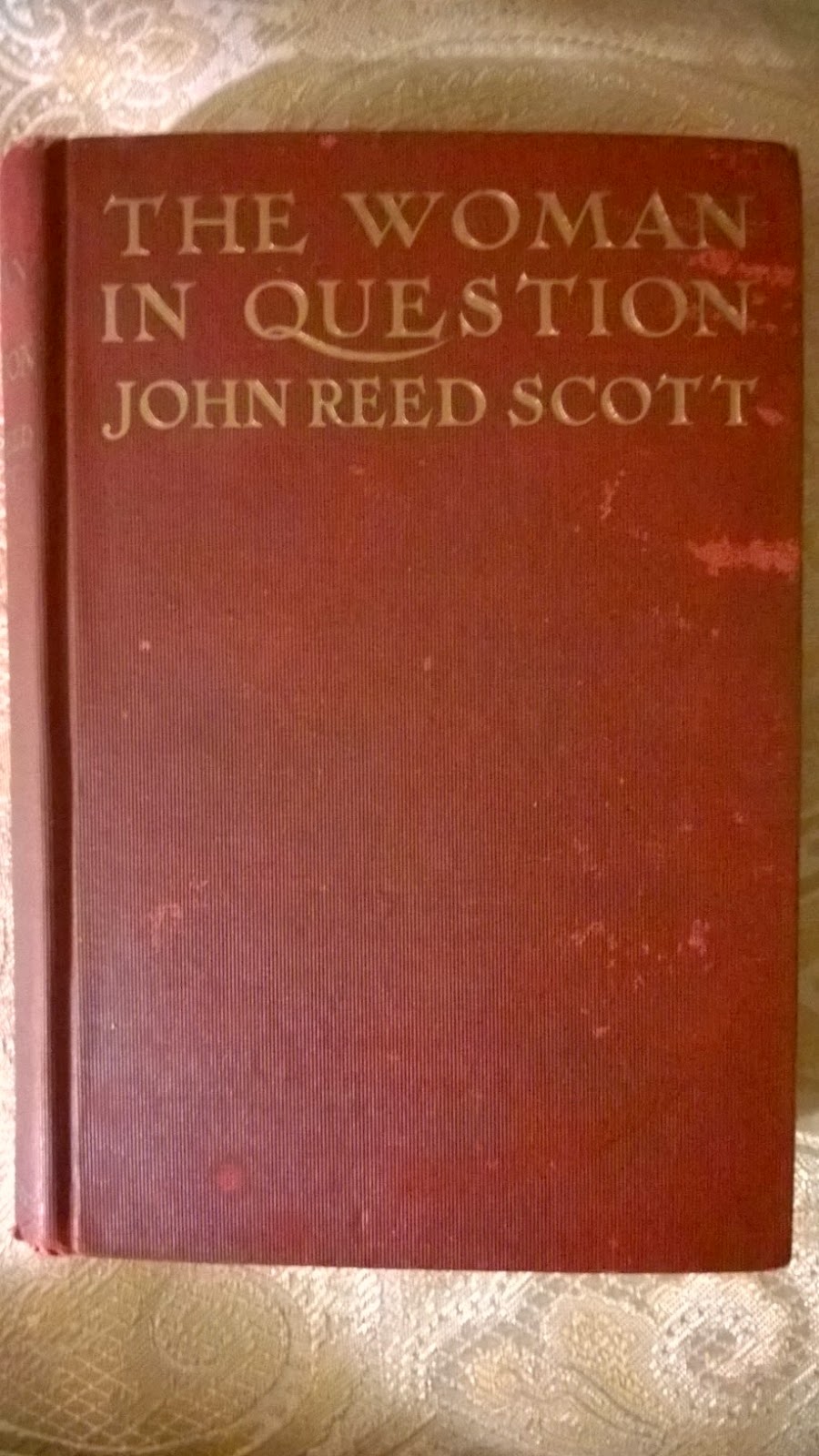 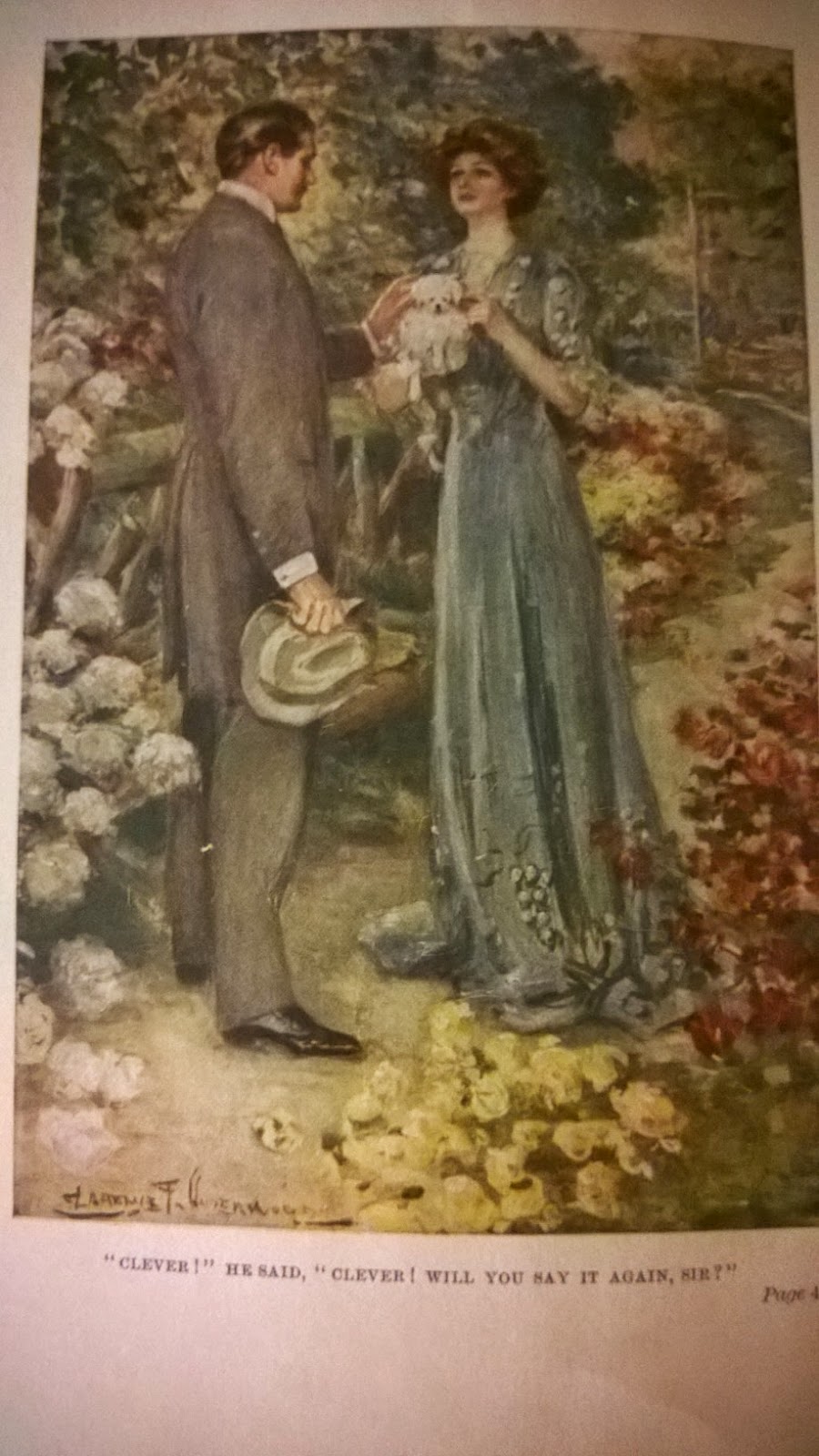 The Woman in Question, by John Reed Scott

John Reed Scott (1869-1942) was born in Gettysburg, PA. He attended Gettysburg College (here I will note that we visited the college a few years ago when my daughter Melissa was looking for a school -- I was impressed, but it was too expensive). He became a lawyer and practiced from 1891 to 1907, in Gettsyburg and in Pittsburgh, before returning to Gettysburg to write. He had a fair amount of success with romantic adventure fiction, such as his first novel, The Colonel of the Red Huzzars (1907 or perhaps 1906 (sources disagree)), and its sequel, The Princess Dehra. He has an entry in the Science Fiction Encyclopedia because his 1914 novel, The Duke of Oblivion, has slight science-fictional elements (it concerns an underground English colony in Mexico) -- there it is said that he was only active from 1907 to 1916, which seems curious as he was only 47 in 1916, and he lived for 26 more years. Perhaps he returned to the practice of law? He is referenced as being involved in efforts to preserve Gettsyburg as an historical site. He died in Maryland, but was buried in Gettysburg. (Some of these biographical details come from a 1911 book that I was able to "look into" via Google: Colonial and Revolutionary Families of Pennsylvania, others need to be credited to the sleuthing of Denny Lien and Steve Holland, who found information in the National Cyclopedia, and an obituary in the Gettysburg Times.)

The Woman in Question is not an adventure story -- it's pretty much pure romance fiction. I have a J. B. Lippincott first edition (no DJ, only Good condition) from 1909. It opens with a young and beautiful widow, Evelyn Leicester, at her country club, in "Northumberland". She has just come out of mourning, and there is some (sometimes catty) speculation on her next husband. Could it be her longtime friend, Colleton Harwood? He is revealed to be an excellent tennis player, if somewhat indolent and apparently allergic to the prospect of marriage.  But he has just inherited an estate in rural Egerton -- and Evelyn quickly inveigles him into hosting a house party at his new place.

A quick aside: where is Egerton (and for that matter, the big city: Northumberland)? Well, it is said to be somewhat isolated and quiet. Its only claim to fame is that a major Civil War battle occurred there. It was founded in "the first year of the last century". Now, let's see: John Reed Scott was born, and lived the bulk of his life, in Gettysburg, PA. Certainly a major Civil War battle was fought there! It is quite isolated (as I can attest, having driven the twisty roads on the way there). It was settled in 1780 and incorporated in 1806. Seems reasonably consistent with The Woman in Question's Egerton! Which would presumably make Northumberland either Philadelphia or perhaps Pittsburgh (where Scott lived for a time). This latter question was resolved when Denny Lien found an old biographical entry on Scott that says, of The Woman in Question: "the scenes in which are laid in and around Pittsburg [sic], and the book caused considerable flutter among the smart set of the smoky city, who thought they recognized a number of their prominent townsfolk among its characters."

Back to the story: on arriving in Egerton, Harwood all but immediately falls in love with his estate and its history. He is also immediately intrigued by his neighbor, a very mysterious (and beautiful) young widow, Mildred Gascoyne. His lawyer, the crusty old Judge Casson, assures him that Mrs. Gascoyne, despite her mysterious past, is a "lady". Hmmm ... it seems Evelyn Leicester may have a rival!

The house party arrives -- a group of guests chosen by Mrs. Leicester. All are unexceptionable people from Northumberland society except for one -- Henry Landor, who, it seems, is that most awful of things: a social climber!

We quickly learn that Mrs. Gascoyne must have some past, unhappy, acquaintance with Landor, for she is terribly upset to see him. Except that somehow he doesn't quite recognize her -- surely the lady he remembers had black hair, and Mrs. Gascoyne's is red. And indeed Colleton Harwood realizes he has encountered Mrs. Gascoyne before -- in Venice, where he decided that she was the only woman to rival Evelyn Leicester in beauty.

That sets up the plot, which bounces along nicely enough over the week or so of the house party. No point in detailing it: it's clear already that all will turn on the mystery of Mrs. Gascoyne's past and on her connection with Henry Landor. We have already been told quite clearly who the heroine is (she is, after all, the Judge tells us, "a lady") and who the villain is (he is, gasp!, a social climber). It's pretty readable stuff, enjoyable in a forgettable fashion -- it never surprises, and doesn't really convince, but it's kind of fun.

Except ... well, the book was published in 1909. It is "of its time". But, I have to say, some of the attitudes expressed seemed more virulent to me than in most popular fiction I have read of its time. Some of it is expressed in the attitude towards Henry Landor (who, to be sure, is later revealed to be a truly bad person, guilty of both financial bad dealings as well as abusive treatment of women: but the author puts his fingers on the scale to lay those failings on his quote low unquote birth.) Worse, though, are the attitudes toward black people -- which are introduced for no particular reason (they don't really affect the plot).  Some quotes: from Judge Casson: "The negro is a child, sir -- easy to manage if you understand him, worthless and trifling if you don't." Casson also objects that Harwood's butler, William, was allowed to attend college. Harwood responds: "William has told me he thinks his education was likely a mistake -- that God meant the negro for a servant and learning only unfitted him." Harwood is also unsettled when he thinks William has been reading a learned journal, and relieved to find that it was not him but Mrs. Gascoyne. For a brief time I thought maybe Scott was setting us up to reveal how wrong those views were ... but no -- he just made sure to have them expressed (by Judge Casson, a sort of "wise old man" figure) -- and then no more mention is made -- they're of no importance to the plot.