Old Bestsellers: The Night of Temptation, by Victoria Cross 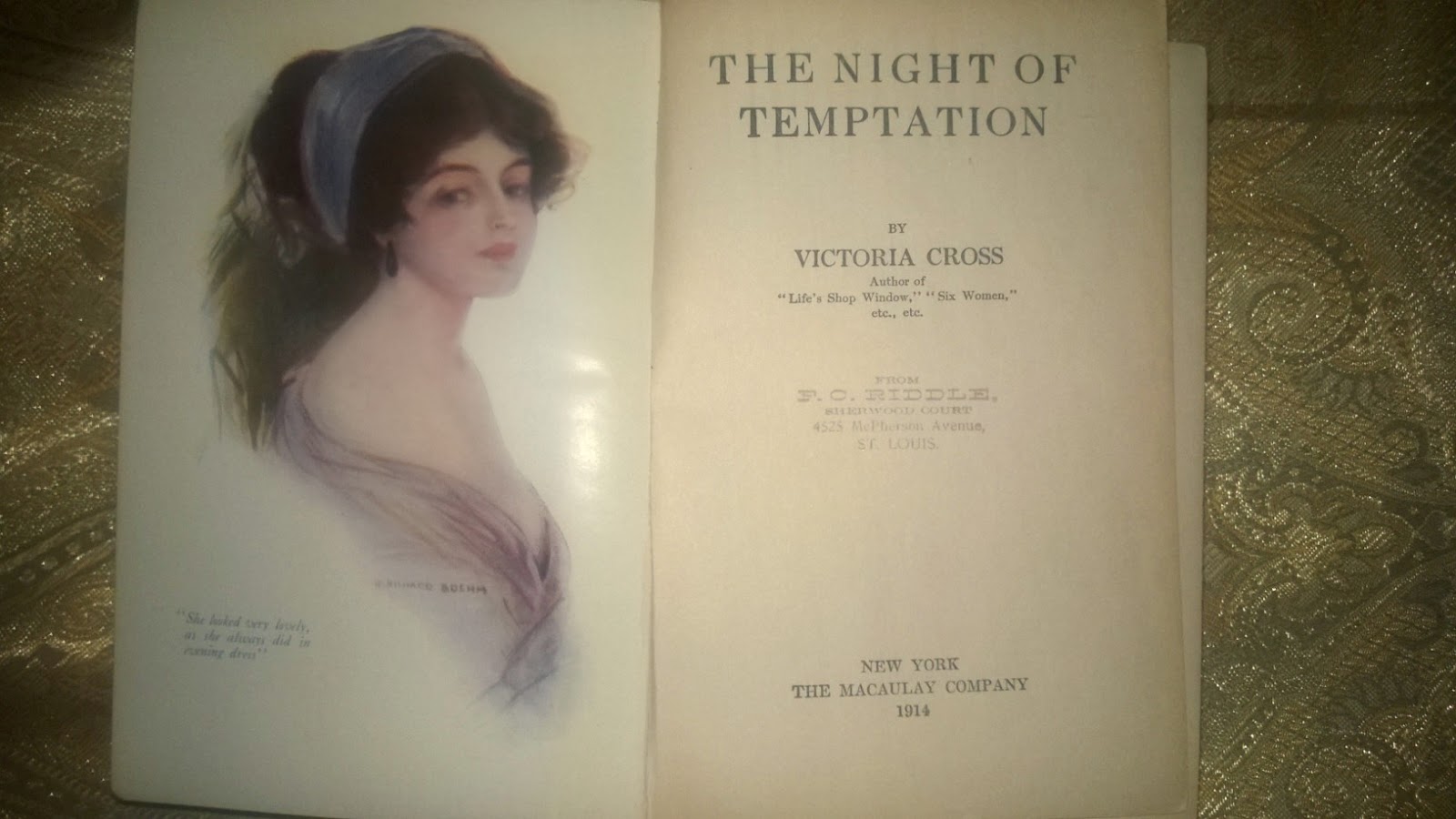 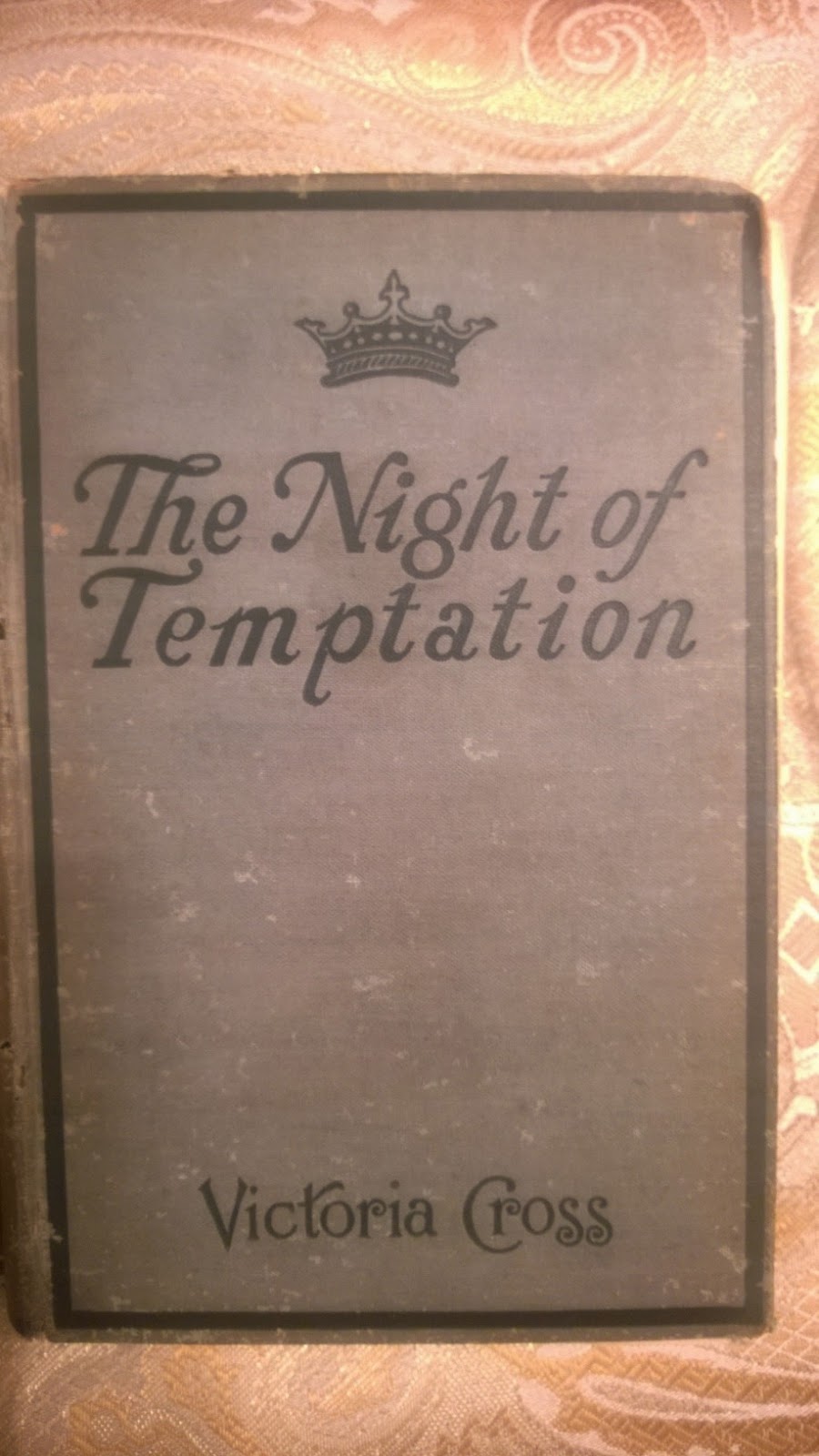 The Night of Temptation, by Victoria Cross

Perhaps my primary goal in this series of reviews is to find books and authors that were once big sellers and are now totally (or all but) forgotten. And all the better if the writer has an interesting story. That's certainly the case with Victoria Cross.

Victoria Cross was born Annie Sophie Cory in 1868. Her father Arthur was a Colonel in the British Army, and also editor of the Civil and Military Gazette. This is the same newspaper for which Rudyard Kipling wrote --  Arthur Cory almost certainly knew Kipling (and Kipling's father was a contributor to the newspaper as well) -- but seems to have left the paper about when Rudyard joined it. Annie had two older sisters. The family was apparently well off and to some extent upper class. She grew up in India but by the age of 20 was in England attending London University. She seems to have continued to travel widely throughout her life. One of her sisters also became well known for her literary efforts: Adela Florence Nicolson, who wrote faux-Indian poetry as "Laurence Hope". Both of Annie Sophie Cory's sisters ended up committing suicide -- the fate also of some of her female heroines. Annie Sophie Cory (or Vivian Cory Griffin as she later called herself) died age 84 in 1952.

In 1895 her first published story appeared: "Theodora: A Fragment", which was in fact one chapter of a novel she had finished in 1894 but did not publish until 1903, perhaps because its unconventional eroticism made it a hard sell for a new writer: the title heroine was androgynous in appearance, had a mustache, had no interest in marriage, and ended up committing suicide after being gang-raped. Her first published novel, The Woman Who Didn't (1895), concerns an unconsummated shipboard affair between a man and an unhappily married woman. Her most famous novel by far, Anna Lombard, appeared in 1901. It is a love story set in India between a young woman and an idealized man (according to Cross, he was supposed to be a Christ figure). The kicker is that the woman has an affair with her Pathan servant, and her English lover does not reject her or even ask her to stop the affair. However, he does not marry her until her Pathan lover dies, and until she kills the newborn child of that union. All this was shocking enough to get it banned in New Zealand (or so I assume -- at any rate Cross had to fight a court case on its behalf), and to sell some 6,000,000 copies. SF readers may find one of her later novels rather interesting: Martha Brown, M.P., A Girl of Tomorrow (1935), which is set in a future in which women and men in England have exchanged traditional gender roles. The novel ends, however, with Martha Brown abandoning her English political career and going to America, where, apparently, men are still real men.

A note on the author's names: she wrote variously as Victoria Cross (sometimes spelled "Crosse"), Vivian Cory, and V. C. Griffin. Griffin was her mother's maiden name, and also of course the name of her uncle, Heneage Griffin. Annie Sophie Cory never married, but after her father's death she moved in with Heneage Griffin (who was independently very wealthy), and they lived together (traveling constantly) until his death in 1939. It is not clear whether their relationship was sexual, but it was certainly rumored to be so at the time, and some later researchers have come to the same conclusion. (Indeed, Cory once claimed (falsely) that she had been bequeathed to her uncle upon her father's death.) That said, her mother was also part of the household. She did fall in love with a younger man after Griffin's death (when she was 71): this man reportedly stole some £100,000 from her. I should note that the book I have, The Night of Temptation, though published as by "Victoria Cross", is copyrighted by "Vivian Cory Griffen [sic]". It appears that she called herself "Vivian Cory" in everyday life from about 1895, and added the "Griffin" after joining her uncle's household.

Most of the above details I owe to Charlotte Mitchell, who compiled a bibliography of Cross's work for a series of Victorian Fiction Research Guides. Mitchell's take on Cross's work seems to me fairly level-headed, even accounting for her general advocacy. Mitchell writes:  "Even her most enthusiastic readers acknowledge that her work is characterized by lapses in taste and logic, vulgarity, implausibility and craziness." And also, after noting that many readers laud Cross for her seemingly modern attitudes towards interracial love affairs and extramarital sex, she adds: "As I read more, however, I became conscious that its appealing features coexist with and are inseparable from others which are less well adjusted to the taste of early twenty-first-century academic critics. To portray her as a heroine of feminism, or of racial tolerance, which was my first thought, seems to present more difficulties than can simply be resolved by pointing out that, naturally enough, she was influenced, for all her impatience with conformity, by the ideas of her time."

Mitchell seems to me to have the right of it. In fact, I would say, based mainly on the evidence of The Night of Temptation, that Victoria Cross was rather a nutter. Her attitudes on class -- mainly represented by utter contempt for the "lower classes" -- were revolting. Her attitudes on gender were odd: on the one hand she thought women indisputably the superior sex: men, she wrote, had no interest at all in intellectual pursuit. On the other hand once a woman met her true lover she was bound to be submissive to him -- a truly worthwhile man, if rare perhaps, was apparently far superior to any woman. I was reminded of Ayn Rand. (And, indeed, some of Cross's economic views also appear to be vaguely Randian.) She also expresses, in this book, some downright weird theories about genetics and the influence on a person's character of the time spent in the womb.

Anyway, on to The Night of Temptation. This book was first published in 1912 in England, by T. Werner Laurie, and in the US in 1914 by Macauley. I have a copy of the latter edition, possibly a first, but in no better than fair condtion, no DJ.

The book opens in a rectory in Stossop, England. Regina Marlow is 18, the youngest daughter of the Rector and his wife. In reality, it seems, she is illegitimate, the product of an affair her mother had, never acknowledged. But, due to Cross's eugenic theories, this means she is a superior child, because her mother's love for her father affected her positively during her gestation, while her older sisters were ruined because the mother hated their father (her husband). At any rate, Regina is a beautiful young woman (as are her sisters, physically), but she is little liked by her family. She spends her time studying, painting -- she is (Mary Sue-like) approximately the greatest painter in the history of England -- and communing with nature in her garden. She had managed to attract the attention of three local men, whom she rejected of course. (One of them subsequently committed suicide.)

One of her father's college acquaintances, Everest Lanark, comes to visit. Everest, some 30 years Regina's senior, is the most perfect possible specimen of manhood. The Rector of course hopes he'll take one of his daughters off his hands, and both the older girls have a go at him. Everest, naturally, is repelled by their vulgarity and lack of intellectual depth. Before long he is visiting with Regina privately, and within a week they have begun a sexual affair. (Alas, though the book makes it clear they are sleeping together, there are no intimate details.) Everest is a bit concerned -- is this merely a temporary infatuation? He resolves to leave and break off the affair, but becomes too involved, and proposes marriage. But Regina rejects him -- she intuits that to marry him would be to unfairly tie him to her. Instead she offers to marry him if he still wants to after spending some time away. And so he leaves. But soon her family's insufferability makes it clear she can't stay, and she follows Everest to London, moving in with him and resuming the affair, but still refusing to marry him. She also establishes financial independence (a key theme for many of the women in Cross's books) by selling one of her paintings for £500.

After a while they travel to Africa, planning to sail down the Nile and then hunt lions. Regina decides she will marry Everest once she is sure she can provide him an heir ... but then Everest's extremely beautiful but terribly stupid cousin joins him. It is clear that the cousin believes she is Everest's rightful mate, and before long she too is sleeping with him. (It seems that Everest, as the alpha male, has the right to sleep with whichever women he wishes.) Just then Regina realizes she is at last pregnant -- but what shall she do if Everest prefers his stupid cousin? But then comes the lion hunt, which of course provides a means of revealing the true worth of each of the young women!

I have to say, after an agonizingly slow opening, I found the novel engaging enough on a plot level. I had to ignore the Mary Sue-ism, and the repugnant social views, and the rather one-dimensional characters. Cross also throws in a brief reference to her novel Anna Lombard. And, as I hinted, I regretted the lack of explicit sex -- it really seems this is a novel that would be improved if there was just a bit of detail on the obviously rather active sex lives of the protagonists. I can't by any means call this a good novel ... the prose is indifferent and sometimes awful, the action melodramatic, the characters thin, the attitudes nutty ... but, except for the first couple of excessively slow and far too long chapters, the story is entertaining. I can see why Victoria Cross's books sold well, and also why they are largely forgotten, and also why a few (apparently feminist) critics have chosen to revive them at least to a mild extent. On balance, I'm happy to have read this novel, though I don't think I'll seek out any more.
Posted by Rich Horton at 7:44 PM