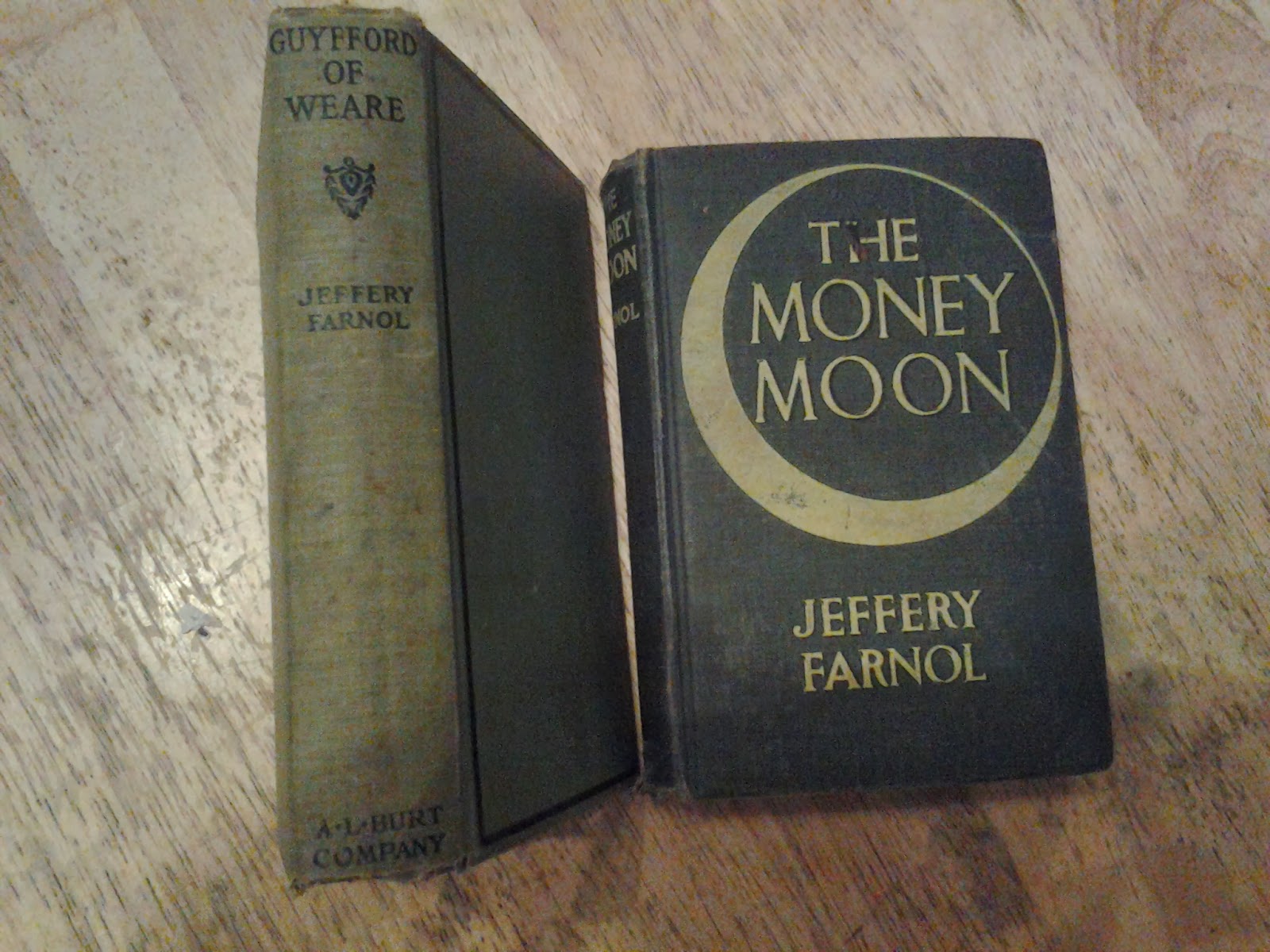 Guyfford of Weare (and The Money Moon), by Jeffery Farnol


One of my favorite writers of "old bestsellers" is Jeffery Farnol. Farnol (1878-1952) was a writer of historical adventures and romances, in the first half of the 20th Century. He was born in England, and spent most of his life there, though he spent some time in the U.S. His first novel appeared in 1907. His most famous books are probably The Amateur Gentleman (1913) and The Broad Highway (1910). He often set his novels in or near the Regency period, and indeed he is regarded as a significant influence on Georgette Heyer, who began her career a dozen or so years after Farnol. I've previously read the two novels mentioned above, with a fair amount of enjoyment, and one other novel, The Money Moon (1911) with rather less enjoyment -- The Money Moon is set contemporaneously to its writing, which may be why it doesn't work as well..

Guyfford of Weare is from later in Farnol's career -- it was published in 1928. I read an A. L. Burt edition of this book, as with many of the books in this series of reviews. It's set in the 18th Century, in England. It opens with a young woman, Helen D'Arcy, trying to retrieve a certain letter from the roguish Sir Richard Guyfford, rumored to be both a murderer and a debaucher of young women -- including Helen's friend Angela. Quickly we gather that Sir Richard has long been falsely accused of various crimes, and the real villain is his cousin Julian, who hopes to gain his estate by assuring Sir Richard's death.

Thus begins a slightly tangled story, involving several rivals for the beautiful Helen's hand, and involving Sir Richard being once again accused of murder, and involving lots of mistaken identity, and gypsies, and highwaymen -- good highwaymen, mostly. The end is never in doubt -- of course Sir Richard will eventually be redeemed, and he and Helen will fall in love. But the plot isn't really the point of the book -- it's rather twisty, as I said, and certainly very busy, but it's not really all that well constructed. But for all that the book is fun to read, and mostly because of Farnol's writing. His prose, particularly his dialogue, is very artificial (the which I don't think he ever doubted). But it works for me. The touch is mostly quite light. It's pleasant to read, often quite funny is a feather light manner. Farnol essays country dialect, and Romany dialect, and exaggerated upper class posturing -- I couldn't say if any of this is much in the way of accurate, but it's effective. The characters are not particularly deep, but they're well enough done. Helen is perhaps a cliche version of the "spitfire", but she does have her own mind, and courage, and "agency". I also liked her older guardian, Madame La Duchesse. This isn't even close to a great novel, but it's a fun read.

I might as well add what I wrote long ago about The Money Moon. As noted above, I preferred The Amateur Gentleman and The Broad Highway, both Regencies (yet quite different from each other), but I didn't write about them! So:

The Money Moon is an early Jeffery Farnol novel, published in 1911. I decided to try Farnol because he is apparently an important influence on Georgette Heyer (also, perhaps, Wodehouse and Vance). This novel is contemporary to 1911, and is breezily readable but not terribly special.  A very rich American follows his fiancee to England, is dumped for a Duke, and wanders in the countryside, there encountering a young boy looking for his fortune, and the boy's beautiful, financially beleaguered Aunt.  They fall in love, but the obvious solution to everyone's problems (the hero pays off the beautiful Aunt's mortgage, then they get married and live happily ever after) won't do because of the lady's pride.  The hero tries a couple of transparent ruses to get around this problem, is caught, and eventually prevails by brute force.  (Nothing abusive, I rush to say.) The plot wasn't subtle enough for me, and the characters were early 20th century sexist and classist cliches.  In this latter way it was indeed reminiscent of Heyer, but her early "contemporary" novels (i.e. Barren Corn), which are horrible (actually Farnol was less sexist, I thought, than Heyer).  I'm making this sound worse than it is: it was still a fun, fast, read, and the characters were likeable if not believable.  I was hoping for more twists to the plot though.