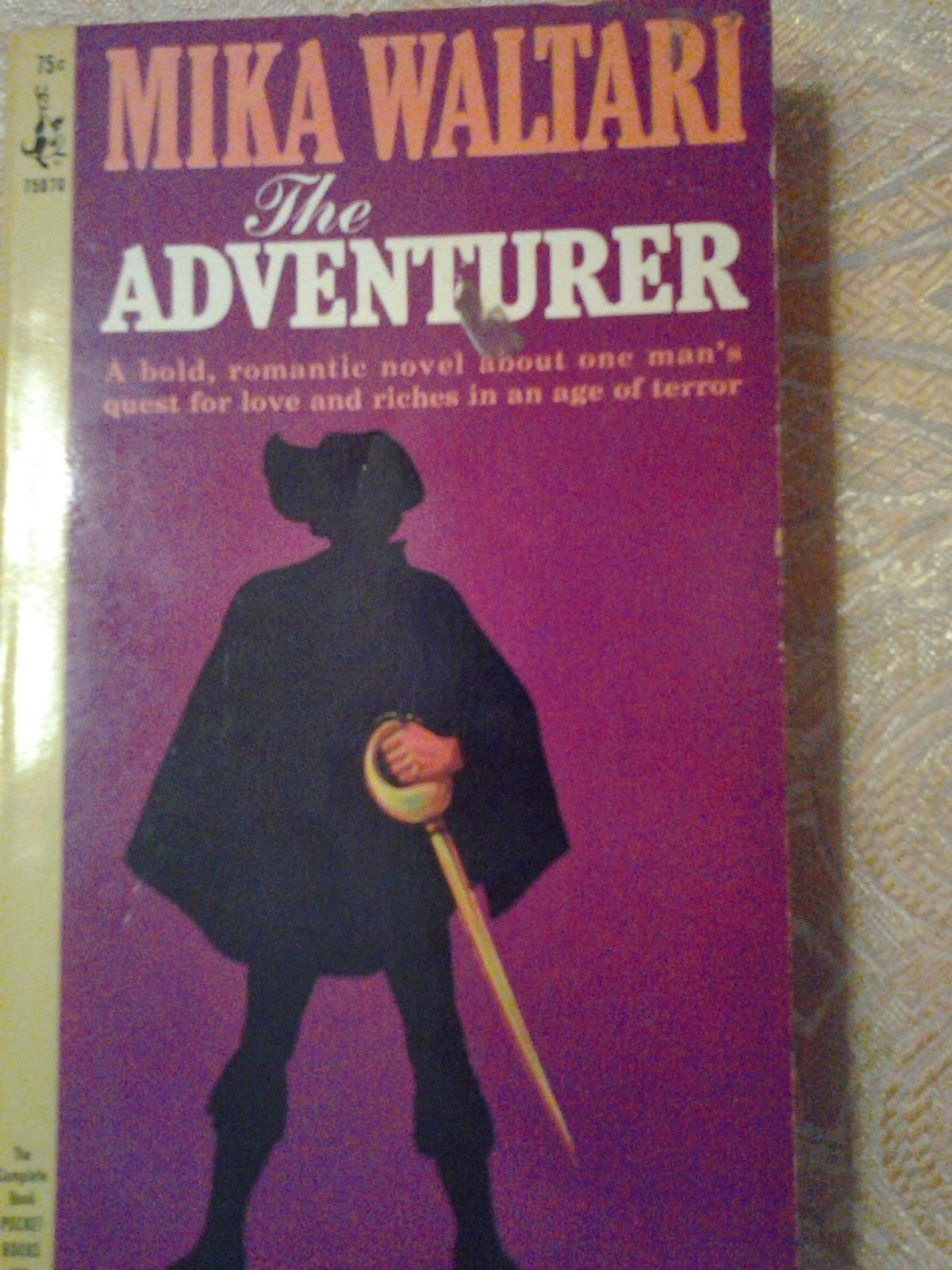 I may be cheating a bit with this entry: I'm not sure the author, or even the book, really qualifies as "forgotten". But by now not all that widely remembered, anyway! Mika Waltari (1908-1979) was a fairly significant, and fairly prolific, Finnish writer. He wrote contemporary novels that gained some praise, but he gained at least a mild international reputation for his historical fiction.  His best known books are probably The Egyptian (1945) and The Adventurer (1948), to give them their US titles. The Egyptian in particular was a huge success: it was made into a movie in 1954, and according to Wikipedia it was the bestselling "foreign novel" (I assume they mean "foreign language novel") in the US prior to Umberto Eco's The Name of the Rose.

But it was The Adventurer that I stumbled across. I found a 1965 Pyramid paperback edition of it. The cover copy is worth mentioning, mainly for its inaccuracies. The front cover says "A bold, romantic novel about one man's quest for love and riches in an age of terror". It is certainly not romantic, nor is the "hero"'s quest really for love -- perhaps for riches. It is an age of terror, though. On the back we learn, for example, that the hero's wife is a "passionate red-headed girl who draws from him a fiery love he never dreamed he could give" which might be technically true but which grossly misrepresents the spirit of that section of the book.  It states "Michael takes a bloody vow to fight the forces of tyranny wherever they may be ... He becomes known as The Adventurer."  He took no such vow, and if he fought the forces of tyranny that was because there was so much tyranny to go around that whichever side of a fight you were on your opponent was likely a tyrant.  And he was never called The Adventurer, and would have been the last person anyone called that -- the book's title is purely ironic.  Oh well, that's blurbs for you -- inaccurate, and also spoiler-filled!

The book is about a Finnish bastard named Michael Furfoot (which is apparently what the Finnish title means in English), born in 1502 or so.  It follows his life from an invasion of the Danes (or Jutes) in about 1510 to about 1525.  The central subject of the book is the Reformation.  It's an extraordinarily cynical book.  Almost every character is basically evil, the narrator definitely included, Martin Luther included, certainly the entire Catholic hierarchy included in spades.  As such, it's a hard book to like, because you can't root for anyone.  It is quite funny in spots, and pretty involving, and rather depressing as man's thoroughgoing inhumanity to man is described at extended length.

The storyline is somewhat episodic, following young Michael as he is raised by the town witch, becomes something of a scholar, gets involved traitorously (though mostly by accident) with the invading Danes, is forced to flee Sweden and Finland as a result, ending up at the University of Paris with his longtime friend Andy.  He becomes involved with a whore who betrays everyone in sight at every chance. Back in the North, he gets in more trouble, and he and Andy head for the Holy Land, but Michael ends up left for dead in Germany.  Brought back to health by another "witch", he ends up marrying her despite her ugliness and age, only to see her arrested by the Inquisition.  Michael vows revenge against the Pope, and after some time involved with the futile Peasants' revolt, sparked by the Reformation, he and Andy end up in a mercenary army which ends up sacking Rome, only to be betrayed once again by a faithless woman.  At the end, he is off again to the Holy Land, but this time we know he will end up in the service of the Ottomans. There was a sequel, called The Wanderer in the US, which showed Michael's career in the Ottoman Empire.

In the end I'd have to say this is a pretty good novel, if as I suggest kind of depressing, ultimately, and incredibly cynical.
Posted by Rich Horton at 8:38 PM