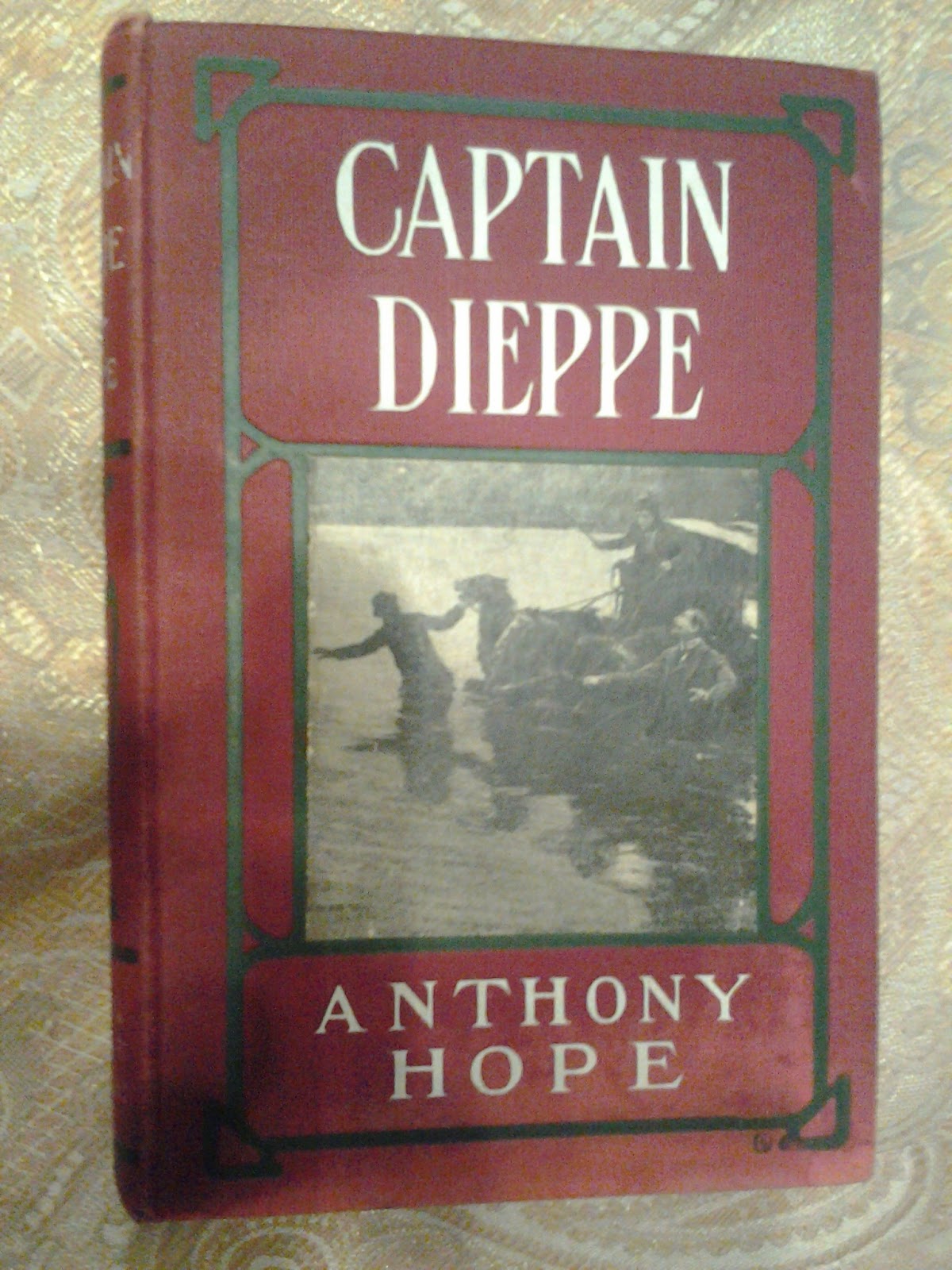 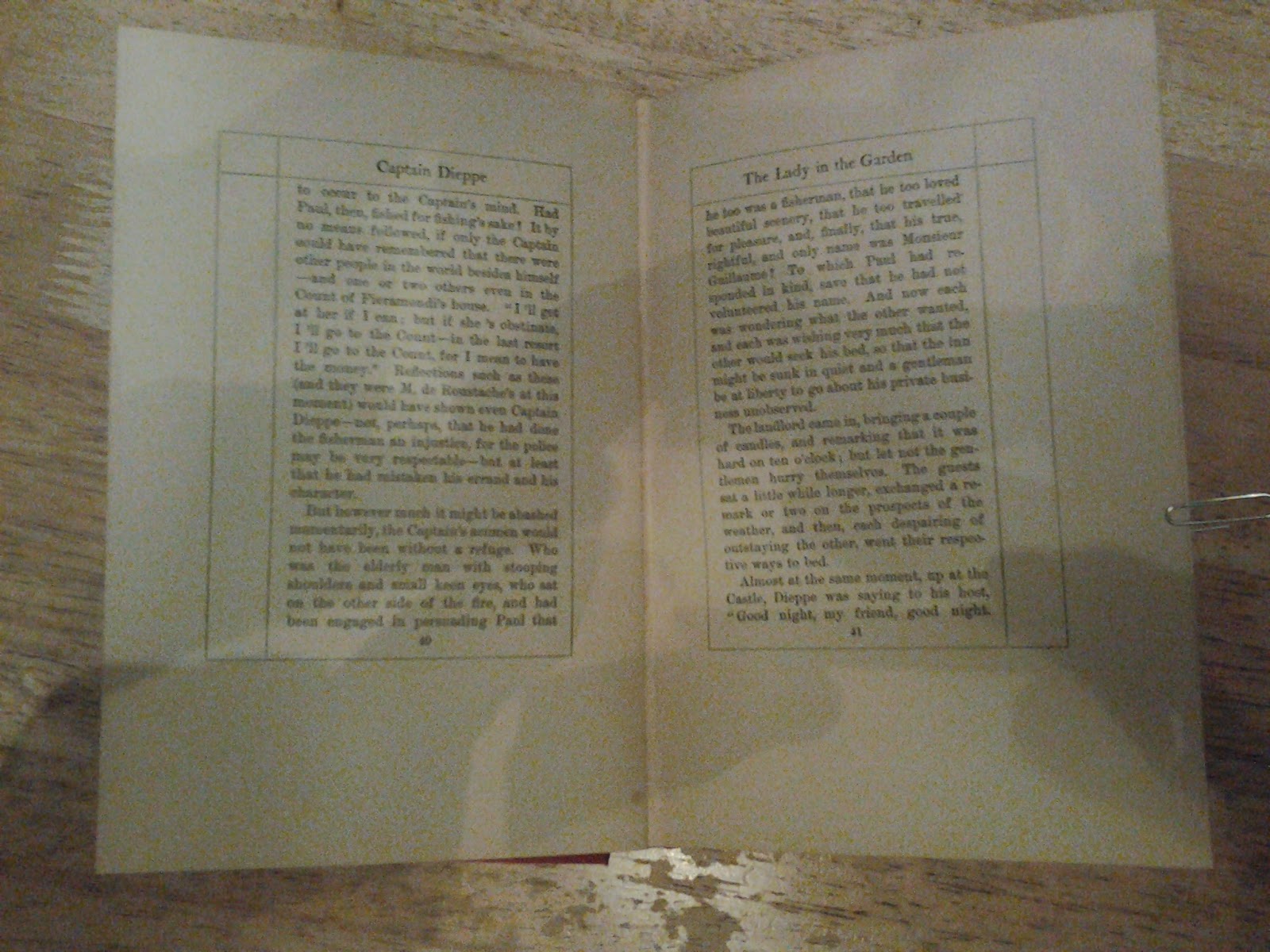 Many of the writers I will cover in this series of reviews are by now all but forgotten, along with all their books. But there are exceptions ... I suspect it will be some time before Anthony Hope, and at least one of his books, is forgotten. The book of course is The Prisoner of Zenda (1894). It has been filmed something like 10 times (at least), and has been made into plays, and even an opera. A sequel, Rupert of Hentzau (1898) is also well-remembered. But aside from those two books, it doesn't seem to me that any of Hope's work is much read today, though he had other successes in his lifetime, such as an early collection of sketches, The Dolly Dialogues (1894).

Anthony Hope's full name was Anthony Hope Hawkins, born 1863, died 1933. He was a barrister, and stood for Parliament (losing), but gave up his legal career after the success of Zenda. He was knighted in 1918, apparently for his services (as a writer) to the war effort.

Captain Dieppe is a very short book, really a novella, about 32,000 words long. It was serialized in six parts in the Ladies' Home Journal in 1899. My edition was published in 1902 by Doubleday, Page, & Co. It appears to have been first published in book form in 1900, by Doubleday & McClure, the original name of the famous house (which was cofounded by magazine publisher Samuel McClure). The change in name of the publisher happened in 1900.

The pictures I've taken above include one of a page from the book, highlighting the odd layout, which contributes to such a short book taking up a respectable seeming 223 pages.

The novel is pretty good fun, if very slight indeed. The title character is a Frenchman, nearly 40 years old, and apparently some sort of spy (for money). He is in possession of some valuable information, and he is on the run from officials of some sort (apparently French officials?) in Italy. He ends up at a slightly odd house, and is welcomed by the owner, the Count of Fieramondi. Dieppe soon learns that the Count is estranged from his wife, who still lives in the house, which is divided in half. The Count offers Dieppe his room, because it is attached to his wife's room, and the Count does not wish to risk an encounter. Naturally enough, Dieppe finds himself yielding to the temptation of opening the door between the rooms, and catches a glimpse of a thoroughly delightful young woman.

Soon the Count has enlisted Dieppe's help in interceding with his wife, which pricks Dieppe's conscience because he finds himself rather falling for the lady. Things are complicated by a couple of sinister characters in the nearby village, one of whom, it turns out, wants to blackmail the Countess; and the other wants to relieve Dieppe of the important information he has. The pair join forces, and Dieppe is lured to a rendezvous or two, with the object of resolving the Countess' difficulties with her blackmailer. Shots are exchanged, betrayals happen, another woman appears on the scene, a river floods ... and after a twist or two (none too surprising) things are neatly resolved.

As I said, it's good fun. Hope's writing is featherlight and witty. Dieppe is an engaging character, and the other characters are thinly but effectively portrayed. This isn't the sort of book that demands revival, but if you run across a copy it will likely entertain you for the short time it takes to read.
Posted by Rich Horton at 8:47 PM