Recently I did a piece on potential Hugo winners from 1957, having noticed that no stories from 1957 won Hugos: the 1958 Hugos went to stories from 1958 -- a result of the rules at that time extending eligibility up until a couple of months before Worldcon, and also that the 1957 Hugos didn't have any fiction awards. 1954 is in a similar state -- the short fiction awards from 1955 went to Walter M. Miller's "The Darfsteller" (Astounding, January 1955) and Eric Frank Russell's "Allamagoosa" (Astounding, May 1955). Mind you, the novel winner, "They'd Rather be Right", by Mark Clifton and Frank Riley, is from 1954 (Astounding, August through November), but it is also widely regarded as the worst Hugo-winning novel in history, so there's no harm looking at potential alternate winners in that category either!

I'll note for the record that the novelette "The Darfsteller" is an excellent story, and a very worthy Hugo winner (though I'd probably choose Damon Knight's "The Earth Quarter" (If, January 1955) instead) and the short story winner, "Allamagoosa", is good fun, though I'd have chosen one of several other candidates. ("Watershed", by James Blish, for example, or "One Ordinary Day, with Peanuts", by Shirley Jackson.) "Allamagoosa", by the way, is the first Hugo winner by a non-American (unless you count the German-born Willy Ley, who won for his science articles in 1953 -- but I'm pretty sure he'd become an American citizen by then.) I note as well that Richard A. Lupoff's excellent anthology What If?, Volume 1, selected "alternate Hugos" for the years 1952 through 1958, and his choice from 1954 was "The Golden Helix", by Theodore Sturgeon.

Incidentally, you might notice that all three fiction winners in the 1955 Hugos are from Astounding. In addition, the Best Editor award went to John W. Campbell, Jr., and the Best Artist went to Frank Kelly Freas, then as throughout his career a regular contributor to Astounding/Analog. Perhaps not surprising -- Astounding certainly retained a position as one of the leading SF magazines. But the story I've heard is that fans of Astounding were somewhat annoyed that Galaxy outdid Astounding in the first Hugos (1953), tying Astounding for Best Magazine, and having the Best Novel winner (The Demolished Man, by Alfred Bester) be a Galaxy serial, plus Excellence in Fact Articles going to Galaxy columnist Willy Ley. Thus, in 1955, they (in how organized a fashion I couldn't say) strongly supported Astounding contributors.

[Note -- I'm revising this to mention a couple more stories that I overlooked! Thanks to Joachim Boaz and Kris Vyas-Myall for the prods!]

Here's a possible nomination list (though in reality we can assume "They'd Rather Be Right" would have been on the list too.) I would list The Fellowship of the Ring at the top, and then A Mirror for Observers. And honestly, had either A Mirror for Observers or I Am Legend won (assuming The Fellowship of the Ring might not have got the requisite notice as a UK hardcover only), the reputation of the 1954 novel award would be much higher! 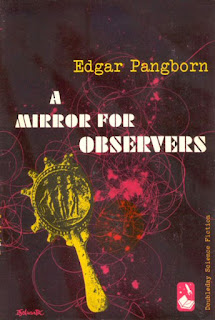 The Broken Sword, by Poul Anderson

The Syndic, by C. M. Kornbluth

I Am Legend, by Richard Matheson

A Mirror for Observers, by Edgar Pangborn

The Fellowship of the Ring, by J. R. R. Tolkien

One in Three Hundred, by J. T. McIntosh

Search the Sky, by Frederik Pohl and C. M. Kornbluth

There were also a couple possibilities from the  so-called "mainstream". Of these three novels, I don't personally consider Lord of the Flies SF (though I can see the argument), and I haven't read the other two.

Lord of the Flies, by William Golding

The Magicians, by J. B. Priestley

And of course there were some from the category then called "Juvenile" (now YA or Middle Grade):

The Star Beast, by Robert A. Heinlein

The Horse and His Boy, by C. S. Lewis

The Wonderful Flight to the Mushroom Planet, by Eleanor Cameron

I only found six novellas particularly worth mentioning, so I list them all. Of these, my pretty clear-cut choice is "Rule Golden".

"Sine of the Magus", by James Gunn (Beyond, May)

Now this is interesting! I found 14 (at least) potential nominees among the novelettes. By sheer coincidence, my five favorites are the first five alphabetically. And the first two are clearly not just the best two stories of 1954, but two of the very greatest SF stories of all time. I don't think it's shocking, but it is disappointing, that none of these stories won an award. I'd also like to highlight once again Budrys' "The End of Summer", which is a wonderful and wonderfully strange story, marred just slightly by a slightly disappointing resolution. (Had he landed that, this story would rank with the two Bester stories.)

Note that Judith Merril's "Dead Center" became the first SF story from a genre publication to be reprinted in the Best American Short Stories series. Indeed, under Martha Foley's editorship (1941-1977) only two SF stories from genre sources were selected, the other being Theodore Sturgeon's "The Man Who Lost the Sea" from 1959.

"The End of Summer", by Algis Budrys (Astounding, November)

"The Music Master of Babylon", by Edgar Pangborn (Galaxy, November)

"How-2", by Clifford Simak (Galaxy, November)

"Down Among the Dead Men", by "William Tenn" (Philip Klass) (Galaxy, June)

Oddly, I'd didn't find as many short stories that stuck out. For me, either Bradbury's "All Summer in a Day" or Seabright's "Short in the Chest" would have been strong winners.