Review: Od Magic, by Patricia A. McKillip, plus some short story capsules

The wonderful writer Patricia A. McKillip has died, at 74. She was a leap day birth, so back when I was doing "birthday reviews" it was a while before I had a chance to do one for her, and when I did it was a reprint of a review I did of The Bell of Sealey Head.

Sadly, before another of her quadrennial birthdays came up, she died. And in her memory, I have compiled a few other things I wrote about her work. Alas, I didn't really write a great deal about her best work -- a few short reviews of short fiction for Locus, or for my blog, and the shortish piece below about Od Magic, a nice novel but not her best.

I read The Forgotten Beasts of Eld and the Riddle-Master books in the early '80s with enjoyment, but it was her glorious Winter Rose, from 1996, that turned me into a true fan, and from that point I read each of her nicely sized novels, one every year or two for about 15 years, always with a lovely Kinuko Craft cover, until she slowed down in the past decade or so. But the way things worked out Od Magic (a minor novel) and The Bell of Sealey Head (which I like rather better) are the only two I wrote about. So this is my tribute! 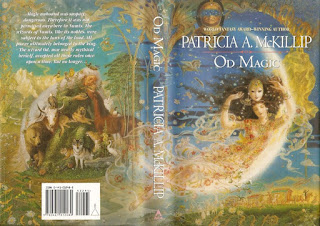 Patricia A. McKillip's latest novel, Od Magic, is not part of a series. But it is one of a consistent set of novels that she puts out, pretty much one per year, tidily sized (about 90,000 words in this case), tidily shaped. In Od Magic there are no bad guys, just temporarily misled people. Which isn't a bad or dishonest thing, really. But in this particular case it does sort of dull the edge of the book.

Od is a legendary female wizard, very long lived but hardly ever seen. Centuries earlier she founded a school of wizardry in Kelior, the capital city of the Kingdom of Numis. Now she appears to a young man in the North named Brenden Vetch, and asks him to go to her school to be the gardener, and to look for the door under the shoe.

I confess I expected a story about Brenden, but this isn't what McKillip was after. Instead she follows a variety of people: Brenden of course, but also the influential wizard of Od's school, Yar; his politically connected lover Ceta; the High Warden's son, another Warden (that is to say, policeman), Arneth Pyt; the King's daughter, Princess Sulys, who is about to be married to a man she doesn't know, a priggish but powerful wizard; and the small-time wizard (small-time? perhaps!) Tyramin and his enigmatic daughter. The story revolves about the King's concern about the potential abilities of Tyramin, who is not under his control, and about Sulys's desire to actually have a chance to know her husband, and moreover her desire to use certain small powers she possesses, and about Yar's concern that his school -- Od's school -- may have become hidebound, too much a tool of the King (even though the King seems for the most part a pretty good King). And also about Brenden Vetch, and his quite remarkable powers, and his connection with certain beings that have long secretly inhabited the kingdom.

It's all a very nice novel, and always readable, and full of characters you like and root for -- but at the same time it seems a bit inconsequential -- or perhaps the term is "easy". In a way I found this refreshing -- the people really are all trying to do their best, they are just often misguided -- and in all honesty that seems truer than the common evil/good divide. But that said there really isn't much tension in the novel -- or much risk. I enjoyed it, and I think most readers will. But it didn't stay with me.

Locus, September 2004
Another Romance genre anthology has appeared with a fantasy/SF theme: To Weave a Web of Magic. As with the earlier Irresistible Forces, an equal mix of SF writers and Romance writers contribute stories. The best in this book is by Patricia McKillip, "The Gorgon in the Cupboard", about a young painter who unwittingly calls forth the spirit of Medusa. Medusa helps the young man, just a bit, as he rediscovers a formal model of his, fallen on very hard times, and as he learns to see her as a woman, not just a painting to be.
Locus, February 2021
Two more stories in The Book of Dragons, I think, are the very best. “Camouflage”, by Patricia A. McKillip, features a Magical Arts student taking his final exam, and ending up mysteriously in a completely different place and time, where he encounters two women, and sees their dragons, who can rarely be seen, because of their magical camouflage. He has a role here too – which may have something to do with his exam. I’m not telling where and when this test occurs, because it’s part of the fun – but the mix here of magic, time travel, war, and dragons is delicious.
[Some people may remember that when I revealed my Best of the Year TOC a couple of weeks ago I mentioned we reserving a place for one more story -- this was "Camouflage". We had queried McKillip about including it, and hadn't received a response -- it is now only too clear why.]
Review of The Fair Folk
Patricia A. McKillip's "The Kelpie" is set in the same milieu as her fine 2004 novella "The Gorgon in the Cupboard": a group of painters resembling the Pre-Raphaelites. Ned Bonham is a moderately successful young painter. He meets Emma Slade at her brother's party. Emma is an aspiring painter just up from the country. The two fall in love on the instant. But Emma attracts the attention of the very successful Bram Wilding, who arranges for her to model for him, in exchange for his support of an exhibition of women's art – and he pressures her for a different sort of relationship. So far this is a straightforward romance plot – no fantasy – but on a visit to Ned's country home she encounters a quite different creature, and this dangerous encounter leads to a resolution of the central triangle.
Review of Firebirds
Patricia McKillip contributes "Byndley", a striking tale of a wizard who unwisely stole something from the Queen of Faerie, and who comes to the title town to try to find his way back to return it.  But Faerie is not so easy to enter -- or to recognize.
Review of Firebirds Rising
Patricia A. McKillip contributes another of her stories about a group of painters resembling the Pre-Raphaelites. “Jack O’Lantern” is about a girl struggling with her parents’ conventional views of the role of women, particularly upper class women, as her older sister prepares to be married. During the painting of a wedding party portrait she meets a curious local lad, and hears a story about the Jack O’Lantern.
Review of A Book of Wizards
Patricia A. McKillip, with “Knight of the Well”, a nicely romantic tale of a the Minister of Water and a Knight of the Well and a water wizard trying to understand why the spirits of water seem angry.
Posted by Rich Horton at 7:40 PM