Avram Davidson is a favorite writer of mine. His prose is charming, eccentric in a good way. His esoteric interests, particularly in the odder corners of history, inform many or most of his stories, and also, for example, the essays making up the book Adventures in Unhistory. I think much of his best work is at short lengths, but he wrote in the neighborhood of 20 novels to go withe dozens and dozens of shorter fictions.

Davidson was born in Yonkers, NY, in 1923. He served in the US Navy in World War II, notably spending time in China. After the War, he spent some time in Israel, but soon returned to the US, and began publishing stories and essays, at first in Orthodox Jewish publications. By the mid-1950s he was regularly publishing SF, Fantasy, and crime fiction, and his novels began appearing in the early '60s. He was editor of The Magazine of Fantasy and Science Fiction from 1962 to 1964. His fiction won him a Hugo Award, a Nebula Award, and an Edgar. He spent some time in Mexico, and later settled in California. He and his wife, the writer Grania Davis, had a son, Ethan, in 1962. They later divorced, though they remained close, indeed collaborating on a couple of novels, and in fact Avram was godfather to Grania's son Seth, from her second marriage. He died in 1993.

Besides his published fiction, Davidson tantalized his readers with a great many abortive projects -- several series that were discontinued after one or two novels, and some hinted at but never finished works -- one of them a planned collaboration with Harlan Ellison (of which I believe perhaps 10,000 words were written.) And much of his work that was published is now hard to find -- many magazine stories were never collected, and those books that were published are mostly out of print. However, Avram has the benefit of devoted family and friends; and his aforementioned godson, Seth Davis, has taken on the ambitious project of reissuing many of Davidson's works as audiobooks, and some even in print. A collection of at least some of the uncollected stories is, I believe, in work. Seth is also producing podcasts, in which he and a guest discuss one of Avram's stories, as frame for an audio version (https://avramdavidsonuniverse.buzzsprout.com/). (Full disclosure: I am a guest on one of those podcasts, discussing "The Sources of the Nile". This is scheduled for February 2022.)

In among Davidson's papers there were some completely or nearly completed pieces -- for instance an account of a trip to Belize -- and at least one novel. This novel has now been published, by Seth Davis' imprint Or All the Seas With Oysters Publishing. Seth was kind enough to send me a copy. 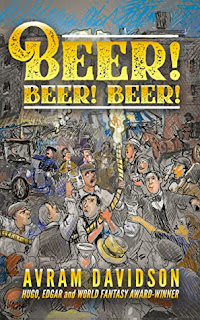 This novel is set in Yokums, NY, in 1930. (Yokums, of course, is a stand-in for Yonkers.) In one sense it is a fictionalized retelling of a locally famous incident: a sewer-cleaning crew encountered a mysterious rubber pipe -- and from its open end beer came pouring out. This was still 3 years before the repeal of Prohibition. The flowing beer attracted a huge crowd, happy to sample it. Naturally there were investigations (and even another beer filled pipe was found) but nothing was ever officially determined about the origin of the beer. To be sure, the notorious bootlegger Dutch Schultz lived very close to one of the endpoints of the pipe ... Indeed, Davidson wrote an article about this incident, and it appears in his 1962 book Crimes and Chaos (which has also been reissued in trade paperback and audio by Or All The Seas With Oysters.)

Davidson took his account of the story, and expanded it into this novel. The novel retells the basics of the beer incident (changing the names of the people involved), but adds a fascinating cast of characters. Besides the principals (such as the renamed versions of Dutch Schultz and the Mayor and the Commissioner of Public Works, etc.) we meet the likes of Mary Mabel Moomaw, a crusader for Prohibition; and Elmer Dugan, a boy dealing with the stresses of growing up in the Depression; and Bill Bomberg and Stelle Wilson, beginning reporters for rival papers, who are hesitatingly entering a relationship; and H. Seymour Clack, Captain of the packet boat Sadie Howell, and his Black Chief Engineer, Preacher Babcock. And many more. What emerges is an affectionate portrait of Yonkers -- er, Yokums -- at that time; interspersed with details of the city's history; and plenty of snark about its politics.

The central story -- the discovery of the beer -- is a minor aspect, really (and well told in the Crimes and Chaos article.) But the ambling descriptions of the characters are the heart of it. It's funny; always interesting; warm. The prose is recognizably Davidsonian, and less convoluted than his prose became late in his career, but still readable. The characters speak in voices, several dialects rigorously captured. (Perhaps a bit too "rigorously" on occasion -- tics like representing an voiced "th" as "dth" for some of the speakers wore rather thin.) The side incidents are intriguing as well -- the Dutch Schultz character's dinner party, for example, or Elmer Dugan running away to sea; and even very minor characters, like the older newspaperman Peter Fogarty, come to poignant life.

This is a novel all of us who have cherished Avram Davidson's work will be delighted to find; and we can hope it will attract new readers for this great writer. It's not a lost masterpiece, but it's a warm and honest book; a well-told tiny slice of American history.