Review: Sorcerer to the Crown, by Zen Cho

Sorcerer to the Crown, by Zen Cho 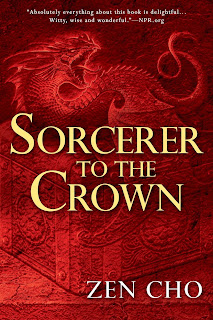 This was Zen Cho's first novel, published in 2015. Cho is a Malaysian writer, based in the UK, where she works as a lawyer. She caught my attention with some fine short fiction, and when this novel appeared, advertised as a Regency romance with magic, I was intrigued -- because I like Regencies, and I like magic. And the book was well-reviewed ... but I remain obstinately behind on my novel reading. However, in 2021, I have made a focused attempt to catch up on novels I've missed in the past several years, particularly novels by women; and I have been using my (new) Audible account to help. Sorcerer to the Crown, then, is the latest such novel I've listened too (the 12th, beginning at the end of last year with Piranesi.) It is read by Jenny Sterlin, very nicely. (As is traditional, I will mention the pronunciation I learned from it: "geas" is pronounced "gesh" (roughly), instead of "jee-us" as I had always read it.)

[Note -- I may misspell some names, not having the printed book to consult.]

The novel opens with Zacharias Wythe, a young black boy, demonstrating his magical abilities before a meeting of the Society of Unnatural Philosophers, sponsored by his master (and eventually adoptive father) Sir Stephen Wythe, who is Sorcerer to the Crown -- that is, the leader of English magicians. At least, of the acknowledged English magicians -- mostly gentlemen, and all men. Zacharias is a curiosity, because of his color. As for women, they are deemed too weak to perform powerful magic, though it is discreetly accepted that many women use household magics to help with cooking and cleaning, etc. But with Sir Stephen's influence, Zacharias is trained in magic, and becomes very accomplished. And then, some 20 years later, Sir Stephen dies suddenly -- and Zacharias inherits his staff, which makes him the new Sorcerer to the Crown. But his position is delicate -- many English magicians are offended by the thought that a lowborn former slave is now their leader. He is even covertly accused of having murdered Sir Stephen. And he is privately subject to a mysterious and painful malady -- in addition to the fact that the ghost of Sir Stephen continues to give him advice. And finally, this is a time of crisis for English magic -- its supply is diminishing, evidently because of some dispute with the King and Queen of Faerie. Moreover, the Sultan of Jondarbyke is demanding magical help from England, to deal with a plague of vampiresses on his island -- and England may not have the magical ability to do so. 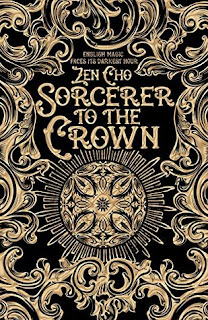 Zacharias has few allies -- his stepmother, Lady Wythe, is one; and he has a couple of supporters in the Society, an older magician named Damerel, and a younger, rather foolish but quite pleasant man named Rollo. It is Rollo who prevails on Zacharias to give a lecture at a magical school for "gentlewitches" -- a school which aims to teach young women to suppress their magical abilities. One of the women at the school is Prunella Gentleman, who was sort of adopted by the school's headmistress after her father committed suicide. Prunella never knew her mother, though her looks make it clear that her mother hailed from India. This of course makes Prunella an outcast too, and she has been doing chores at the school, including teaching, in exchange for her keep. She is also, we quickly learn, an extremely accomplished magician -- as, indeed, are several other young women at the school, despite the efforts of the headmistress. On the day of Zacharias' visit, Prunella is set to cleaning the attic (in part of keep her out of Zacharias' way) -- and there she discovers an old valise that must have been her father's, containing (as she eventually realizes) several magical treasures, in particular seven eggs that might hatch familiars. As such they are incredibly valuable, especially as Faerie has cut off the supply of familiars to England.

Well, Zacharias' visit is something of a disaster, as some of the girls, instead of showing their docile suppression of their magical gifts, get into a fight, complete with hurled spells. Prunella gets quite unfairly blamed, and decides it is time for her to leave. And Zacharias is struck by the realization that it is really foolish for England to ignore the magical abilities of their women, and he hatches a scheme to force the Society to accept women as "magiciennes". At the same time he finds himself burdened with Prunella, who has decided that she will go to London, and that the best way to get there is to hitch a ride with Zacharias.

Things keep bubbling from there ... there are sorcerous assassination attempts against Zacharias ... there are visits from one of the witches of Jondarbyke (a delightful character!) ... one of the more powerful magicians in England mounts an attempt to dislodge Zacharias from his position, aided by his wife, who is more than she seems ... Prunella hatches some of her familiars, with the result that she is de facto the most powerful magician in England ... and, of course, Zacharias and Prunella, against their first inclinations, get closer and closer (I mean, this is a romance!)

Some of this, it seemed to me, is too much of a muchness. The ending, though in many ways satisfying, is kind of a mad jumble. Some plot strands more or less fizzle, though some are quite effectively resolved. There are a couple of out and out surprises, which both delighted me and rather tired me. There are some cliches, most notably the one in which the main character is  a) inordinately beautiful; and b) the greatest sorcerer in the land. (The other main character is of course very handsome, and one of the greatest sorcerers in the land.)

The novel deals fairly effectively with the issue of race, which obviously greatly affects the social positions of both main characters -- yet even there at times I thought things not quite convincing. All in all, I'd call it a classic exemplar of a first novel -- a writer in love with her characters and concept, having a great deal of fun (which is transmitted to the reader) but not quite in control.

I don't want to understate things -- I really enjoyed this novel, even if I felt it didn't quite work completely. But how many novels do? Sorcerer to the Crown is a lot of fun, with characters it's nice to spend time with, and that you'll readily root for. The language is pretty solid -- a decent pastiche of early 18th century prose. There is certainly room for a sequel (and, indeed, one appeared in 2019, The True Queen.) Recommended.