To begin with, I should note that this book was not really a bestseller. But Margery Sharp was a notably successful writer in her lifetime, with early adult novels such as Cluny Brown, The Nutmeg Tree, and Britannia Mews becoming movies, as too her later children's novels beginning with The Rescuers spawned a couple of Disney animated features. Indeed, at least one Rhododendron Pie dust jacket* featured the line "Author of the Outstanding Bestseller "The Nutmeg Tree"". So I think I can shoehorn her into "Old Bestsellerdom".

(*It seems that Rhododendron Pie was never reprinted until recently, so this particular dust jacket must have been slapped onto remaining unsold copies of the book after The Nutmeg Tree appeared. It's worth noting that the copies of the book's 1930 American editions that I found on Abebooks are priced between $210 and $500! All the more reason to celebrate these reprints!)

I have read a number of Margery Sharp's novels for adults, such as Cluny Brown, The Stone of Chastity, and Brittania Mews; and I also read many of her novels for children when I was a child, and again when my children were children. She's an extremely enjoyable writer, comic with a (usually somewhat gentle) satirical edge. She tends to write about somewhat unconventional women -- women who usually know their mind, and who often have to resist others' expectations. Her novels may be love stories, but often are not, even when the structure suggests it; and at any rate you can't necessarily expect the obvious conclusions. I think she is one of the best of the great many outstanding 20th Century British women writers working in the mode of social comedy. And yet, her novels have been hard to find for quite a while. This despite a fair amount of success in her lifetime: or perhaps because of that success she might have been too well known to deserve a rediscovery, unlike say Barbara Pym; or too popular in idiom to achieve the status of, say, Elizabeth Taylor. At any rate, for years I couldn't find her books, not even used copies in antique stores and the like.

So it is with great happiness that I greet the republication of six of her novels by the Furrowed Middlebrow imprint of Dean Street Press. Furrowed Middlebrow is the project of Scott Thompson (and the name of his blog.) Scott's primary interest is British women writers of roughly the first half of the 20th Century. And in the past few years Scott has ushered several of his favorite books and writers back into print -- women like Frances Faviell, D. E. Stevenson, and Miss Read (one of my mother's favorite writers back when I was a kid.) And now it's Sharp's turn. 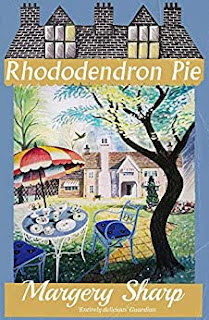 Margery Sharp was born in 1905 and died in 1991. She took a degree in French from the University of London in 1928, by which time she was publishing short fiction. She married Geoffrey Castle, an Aeronautical Engineer, in 1938 (after their affair led to Castle's divorce from his first wife). Castle wrote two science fiction novels himself, while Sharp eventually published 22 novels for adults, another 13 for children, and a fair amount of short fiction and some plays. She seems to have retired in 1978, with her last Rescuers novel, her final adult novel, Summer Visits, having appeared the year before. (I should note that while I read many of the Rescuers books when quite young, and a few of her adult novels in my late teens, I didn't recognize that the writers were the same person until rather later.)

Rhododendron Pie was her first novel, It appeared in 1930. The prologue introduces the Laventie family on the occasion of Ann Laventie's 10th birthday. We soon gather that they have family wealth, and very highbrow and eccentric tastes. The mother is wheelchair-bound. Ann is the youngest. It is the family tradition to have a special pie for the children's birthday -- a pie made of flowers. A cute and clever notion, we think ... but the fulcrum of the novel is revealed at the close of the prologue, when we learn that Ann is a renegade -- she would really rather have had apple pie.

The main action takes place 10 years later. The older siblings, Dick and Elizabeth, have moved to the city, where Dick is trying to be an artist, and Elizabeth is writing sophisticated articles. Dick and Elizabeth spend a summer with the family, and a friend, avant garde film maker Gilbert Croy, has joined them. In the mean time Ann has made friends with the impossibly bourguois neighbours, the Gayfords. John Gayford is clearly interested in Ann, but she seems to feel that her family expects them to do better than the Gayfords ...

Gilbert Croy is an interesting person ... one supposes ... and soon Ann has convinced herself she's in love, and he seems to be interested as well. Ann is also still involved with the locals, and she meets the Gayfords' redoubtable Aunt Finn, and with her family attends the local Fete ... and when they unexpectedly win a prize Ann goes up to accept it, to avoid embarrassing the man who is hosting the Fete.

Ann goes up to London to visit Dick and Elizabeth, and she finally gets a real flavour of their life there. Dick is clearly a mess, no sort of artist at all, and variously involved with a variety of fairly vapid girls. Ann makes friends with one of them, not so vapid, who clearly knows what she wants and is in charge. Gilbert remains interested in Ann but his "proposal" is not a proposal at all ... and Ann finally realizes that she is not like these people (or, I should say, begins to realize it.)

I won't detail the resolution, but it's something we've expected for a while. And if we've been paying attention, we've noticed all along that the Laventies -- mostly due to Richard's "leadership" -- are rather priggish shits. (With the exception of Mrs. Laventie and Ann -- and we learn how important Mrs. Laventie is to the family, and that she knows very well the worth or lack of it in her husband, and what her husband gets up to when away from her.) Elizabeth seems trapped by the fact that she really is able to keep up with all the pretentious folks in the city, including Gilbert, whom she too thinks she loves. Ann has known all along that she doesn't like rhododendron pie -- she likes apple pie, so she is happy to give up any notion of an artistic future.

In some ways this really shows us very much what we can expect from Margery Sharp throughout her career. Characters she mostly likes, but is willing to see in full -- faults as well as virtues. A distinct satirical edge, but softened by her affection for most of her characters. A willingness to defy expectations as to conventional resolutions -- though this is not wholly clear in this book, unless we expected Ann to reveal unexpected artistic depths that outshine Dick's artistic failings and Elizabeth's perhaps empty intelligence. But, mostly, a novel that is simply enjoyable reading incident by incident.

I really liked this book, and I've already bought another Furrowed Middlebrow Sharp reprint, and -- as I intended all along -- I hope to eventually make my way through all of Sharp's oeuvre.