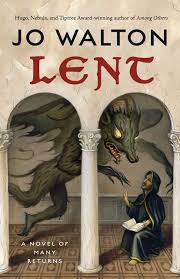 Lent is Jo Walton's 14th novel, from 2019, not counting an unsold early novel that was finally published in 2015. I was privileged to know Jo as one of the smartest, most interesting, most perceptive posters on the great Usenet newsgroups rec.art.sf.written and rec.arts.sf.composition in the late '90s (For those who weren't there in that time period ... these Usenet groups featured probably the very best online disussion of SF ever, and I miss them dearly. (They persist, but they haven't been the same for a very long time.)) It's quite wonderful, then, to see where Jo has gone as a writer since then. As for Lent specifically ... I didn't exactly "read" this, I "heard" it, in the Aubible version, read by Will Damron.

Lent opens with the monk Girolamo Savonarola banishing demons from a convent in Florence. We learn that Brother Girolamo actually can see the demons; and he is surprised at how many of them there are. He traces the infestation to a book in the convent's library in which he finds a curious jade stone. After leaving the convent he agrees to visit Lorenzo de' Medici, the de facto leader of Florence, who is dying. At the Medici home we also meet Lorenzo's sullen son, Piero, and two friends of Girolamo, the Count Giovanni Pico Della Mirandola, and Angelo Poliziano. Girolamo's meeting with Lorenzo is surprising, as Lorenzo seems to be radiant, as if blessed by God. All this serves to introduce many of the key characters of the book, and to show Girolamo's other special gift: prophecy, for he foresees that a King from the North will invade Italy within a few years.

All these major characters are historical personages. The reader has probably heard of the main character, Girolamo Savonarola. If you are like me, you knew the basic outline of his life, and of his reputation as a "mad monk", an ascetic religious fanatic, who was eventually burned by the Church. As the novel continues, it begins to seem an historical novel, resembling in a sense Hilary Mantel's series about Thomas Cromwell -- for much as Mantel tried to rehabilitate Cromwell's reputation, Walton seems to be rehabilitating Savonarola's. (I have since learned that Savonarola has long been mostly rescued from the caricature I learned about in my Catholic school, and that some consider him a key pre-Reformation figure, because of his stance against the corruption of the Catholic Church. As Walton points out in an afterword, he'd have been horrified to be associated with people who broke from the Church -- his goal was true reform within the Church, and nothing so significant as the theological changes Luther and Calvin spurred.) The only fantastical element we see is Girolamo's special gifts -- to be able to see demons, and to prophesy.

So, indeed, for the first half of Lent, this continues: Savonarola's life from about 1492 to 1498 is described, quite involvingly. The turmoil in Italy, resulting from Pope Alexander Borgia's corruption, and from the invasion of King Charles of France, is shown, as well as Savonarola's role in persuading Charles to spare Florence, and his increased influence in the city, trying to inspire a more holy, more virtuous life for all citizens, including such things as the "Bonfire of the Vanities", and finally, tragically, an attempt by one of his allies to prove their miracles by walking unharmed through fire. This last effort literally fizzles, and the already excommunicated Savonarola, along with two of his fellow monks, are hanged and burned.

So far this is indeed a very effective historical novel. One might quibble a bit that on occasion the author's research is a bit too thoroughly displayed, or that the language stumbles a bit in balancing contemporary English with something that feels true to 15th Century Italy (trivial example -- when a character mentions that "King Charles VIII of France" is coming in a situation where they would surely saying simply, say, "Charles of France"), but on the whole it really works, the characters live, and Savonarola is believable and sympathetic.

But this gets us to pretty much exactly the halfway point. Any thing after this ends up begin a really big spoiler, so perhaps you want to stop here, and I'll simply assure you that the novel remains very satisfying in its second half, and that it eventually sticks its landing.

SPOILERS ... after the cover of the Audible version! 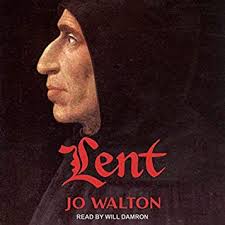 Then, having been executed, Girolamo falls into Hell. And once there, realizes that he is not only damned, but especially damned, for he was one of the angels who rebelled against God. There is no hope for him. Worse, he realizes he cannot even pray. After a long "time" in Hell (in Hell there is no time, of course) Girolamo returns, and he's back to when he was at the opening of the book, expelling demons from the convent. But this time, he remembers his previous life. And he also remembers that he is in truth a demon, which fills him with despair. But, aware of the failure of his previous efforts to make Florence holy, he vows at least to try something different. And with this in mind, on his meeting with the dying Lorenzo, he reveals his true nature to him and a few of his friends, and they are (perhaps a bit surprisingly) sympathetic, and they plot a different strategy for Florence. And they also try to to convince Girolamo of the possibility of redemption for him, though Girolamo cannot believe this.

This sets the template for the rest of the novel, which in increasingly short segments, portrays the attempts of Girolamo and his friends to change history, and Florence's fate. Girolamo tries many things -- abandoning his vocation (once even marrying), or leaning into his vocation and even becoming Pope. They try different political strategies -- banishing Lorenzo's venal heir Piero, or trying to educate him; giving more power to the women of Florence (Girolamo even in the first half worked with many women as allies or respected foes: notably Pico's lover Isabella, also Lorenzo's daughter Lucrezia, and Camilla, who has dissolved her marriage in order to found a new convent), and so on. (We also end up meeting quite a few historical personages, from Richard III to Michelango to several more, as well as of course the many associates of Savonarola who are almost all real historical people.) These strategies have varying success temporally, but none seem to help Girolamo find redemption, nor to achieve what becomes his true goal: a chance at least for redemption for all the demons in Hell. But another key character who turns out to be a demon (who this is I will leave for the reader to find out) may be, in the final analysis, the key ...

This novel is inevitably described as "Groundhog Day in medieval Florence" or something like that, though I think a better comparison might be to Ken Grimwood's novel Replay. (And the whole Groundhog Day genre is becoming quite the thing: I can recommend one of the 2021 Hugo Nominees for Dramatic Presentation, Palm Springs, as an excellent example.) But Walton's interests are broader and more philosophically interesting than most of these examples, as might be indicated by the importance of such characters as Della Mirandola and also Marsilio Ficini, critical Humanist thinkers of that period who also had roles in her Thessaly trilogy. Philosophical and religious debates are often appropriately foregrounded. Key too is the role of women. And the end goal, a decidedly Universalist goal (in Christian terms): the redemption of all, including demons; is inspiring.

Jo Walton remains one of our most interesting novelists, and, it seems clear now (and was already clear at least by the Thessaly books) one of our most intellectual, indeed philosophical novelists. But also, I emphasize, one who tells a good story, even when it's a story we already know, and who makes us care intensely for her characters, and who moves us greatly -- in this novel, Girolamo's personal struggle, his sincere faith, and his enventual fate are quite powerfully displayed.