I really thought I had posted this to my blog long ago, but apparently not. O'Brian's birthday isn't until December, but what the heck, these are great books, I'm posting this now. I wrote this review, of the third novel in Patrick O'Brian's incomparable Aubrey-Maturin series of naval novels back in 1997. H. M. S. Surprise is still probably my favorite of all the series, though all 20 books are completely worth reading. 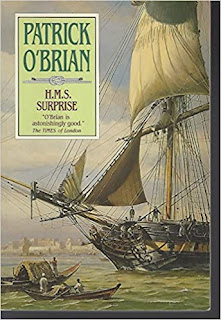 In praising Patrick O'Brian's Aubrey-Maturin books I am on well-trodden ground. In a sense, it is superfluous to do so: so many people, of such varied and excellent taste, have praised these books to the skies that further lauds from the modest likes of me are hardly necessary. Nonetheless, it gives me pleasure to express my delight in books I enjoy, so: onward.

I began reading the Aubrey-Maturin books with Master and Commander, first in the series, just two months ago [back in 1997]. I have decided on a ration of one per month, so this month (December) I read H.M.S. Surprise, third in the series. So far, this is probably the best of the series, though as with other excellent series of books, it can be difficult to pick favorites: the joys are ongoing, and to some extent a result of the cumulative pleasures of the books, and each book has high points and low, leisurely strolls and heart-stopping battle scenes, love scenes, political wrangling, sailing jargon, and much more.

To briefly recap the first two books (I hope without excessive spoilers): Master and Commander introduces Jack Aubrey, a British ship captain, to Stephen Maturin, an Irish-Catalan naturalist/physician. Maturin is at loose ends financially, and Aubrey needs a ship surgeon for his new command, so what swiftly becomes a remarkable friendship is formed. The first book is set in 1801, and follows the doings of Jack's ship, the Sophie, in the Mediterranean during this phase of the Napoleonic wars. There are some ship battles, which are well done but not essential to the enjoyment of the book, but in general the book is a bit episodic in structure. Maturin is introduced to the sea, and becomes fixed as a ship's surgeon; Aubrey has some notable successes, which bid fair to set him up for life financially.

In Post Captain love interests are introduced for both Jack and Stephen: Jack becomes (after much travail) engaged to the beautiful and respectable Sophie Williams, and Stephen becomes involved with Sophie's widowed cousin, Diana Villiers, also beautiful but decidedly less respectable (in early 19th Century terms). In addition, Jack falls disastrously in debt, due to the criminality of his prize agent, and spends much of the novel evading debtor's prison. Stephen is revealed to the reader as a British spy and a fierce supporter of Catalan independence. The war with France breaks out again, and after a thrilling escape from France, Jack is given command of an experimental ship, the Polychrest, and despite its flaws leads a successful raid, gaining promotion to Post Captain (which appears to put him on some sort of "tenure track" in the Royal Navy). Still needing to be on ship (to stay out of reach of his creditors), Jack accepts a temporary position on the H. M. S. Lively, and with some other captains, captures a magnificent prize from the French. His financial future again appears secure.

So we come to H.M.S. Surprise. Political machinations cost Jack his prize money, and Stephen's cover in Spain is blown. As a result, and also because Stephen is scheming to see Diana again (who has been taken by her keeper, the Jewish merchant Richard Canning, to India), Jack takes command of the aged frigate H.M.S. Surprise, and is sent to Cambodia (stopping in India) to deliver the new British envoy to the Sultan of Kampong.

Thus the setup for a long, wonderful, account of the voyage to the Orient and back. The pleasures of this book are remarkably varied: high comedy, such as the famous drunken sloth incident; high adventure, as the men of the Surprise battle not only the South Atlantic at its fiercest, but also the French; and bitter disappointment and even tragedy, in Stephen's seesaw relationship with Diana, as well as Stephen's involvement with a young Indian girl. Indeed the plot of this novel is much the most complicated and well-constructed of the three O'Brian novels I've read.

The pleasures of this book, however, are not restricted to a fine plot. The ongoing development of the characters of Jack and Stephen, and of their complex and fully described friendship, continues to be a major achievement. In addition, the many minor characters are fascinating: the envoy Mr. Stanhope, Stephen's Indian friend, the various ship's officers and men, other ship captains, and so on. And O'Brian's depiction of the building of an effective crew, the relationship of captain to officers to men, is another fascinating detail, and something he revisits from book to book, as Jack encounters different crews in different circumstances. Finally, O'Brian is a fine writer of prose, with a faintly old-fashioned style, well poised to evoke the atmosphere of the time of which he writes to readers of our time, and consistently quotable, in his dry fashion.

One arguable weakness of these books in general is related to the fact that they are an ongoing series. This results in certain formulaic constraints: Jack and Stephen may be in great danger, but we can be sure that they won't die. Also, the books so far follow a similar pattern: Jack begins each book in financial distress (and the opening of the second and third books describe the reasons for his financial problems: in neither case are they his fault), and by the end is financially well set up. Also somewhat formulaic is the heroic nature of the two main protagonists: Jack is a truly brilliant seaman, and Stephen is a brilliant scientist and doctor. But these weaknesses are not important to enjoyment of the books: in particular, though Jack and Stephen are heroic in certain aspects of their characters, they are both multi-faceted characters, with terrible flaws and endearing crotchets in addition to their accomplishments. And they truly come across to this reader as characters of their time, and not 20th Century people cast back into the past. Even Stephen's very contemporary racial and religious attitudes are well-motivated by his background, and expressed in language which reeks wonderfully of his time: "Stuff. I have the greatest esteem for Jews, if anyone can speak of a heterogeneous great body of men in such a meaningless, illiberal way."

I recommend these books highly. It is with great difficulty that I restrain myself, upon finishing each book, from immediately starting in on the next one, though so far my one per month discipline has prevailed. I look forward eagerly to another year and a half or so of pleasure as I continue this series.