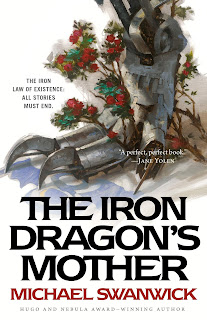 This is Michael Swanwick's third novel set in this particular world, an industrialized version of Faerie. The first was The Iron Dragon's Daughter (1993), which, Swanwick has said (to the book group I'm in for one!) was not intended to have any follow-ons. But when asked for a dragon story for an anthology, he ended up with an idea for another story set in the world of The Iron Dragon's Daughter, "King Dragon" (in The Dragon Quintet), which became the seed for the novel The Dragons of Babel (2008). And last year, The Iron Dragon's Mother appeared. I should note, first, that while I've read a novella extracted from The Iron Dragon's Daughter, I have not yet read that book. I did read, and loved, The Dragons of Babel. All three novels are complete in themselves -- apparently a character or two from each book also shows up in another of them, but the action of each is entirely comprehensible without knowing the others.

I considered outlining the plot of this novel briefly, and quickly realized how unsatisfactory that would be. There is a plot, mind you, a well-constructed plot, with plenty of incident and adventure, essentially concerning a young woman, half-human, half-elven, who is railroaded out of her job, as a dragon pilot, at the same time her father dies and her brother, his heir, runs away. Her goal is to find her brother and prove her innocence. All this drives the action, but what drives the novel is character and language and story.

Characters? Caitlin, of course, the half-breed daughter of the House Sans Merci who thought she was a faithful and accomplished member of the Air Force until she was betrayed. Helen V., the human woman who at the moment of her death jumps from our world to Caitlin's mind. Fingolfinrhod, Caitlin's feckless but loyal brother. Fata Narcisse, surgeon to the Lord of the Rails, charged to keep the living trains in action. Esme, the lucky girl who attaches herself to Caitlin, who is older than anyone else. Edderkopp, the spidery lawyer. Raven, who becomes Caitlin's not fully trustworthy friend.

(Note -- there's no lover in this mix. Caitlin's virginity is an important aspect -- for reasons that don't really match traditional reasons. And, yes, this book pretty easily aces the Bechdel test.)

Language? One of the tricks of fantasy is to balance the expectations of matching your language to the fantastical milieu with the expectations of contemporary readers (i.e. prose in a register they are familiar with.) (See Ursula K. Le Guin's famous essay "From Elfland to Poughkeepsie".) Swanwick here master both registers -- when an invocation of High Fantasie is required, it's there. But more often he is undermining such invocations with comic -- indeed vulgar -- descriptions. And this can be very funny, but better than that, it rings true.

Story? The novel is interlarded with explicit stories, of recent history and distant history, of the childhoods of the characters, of people explaining themselves ... some of these are lies, and all them are true. Of course, one of the main characters (Helen V.) is by profession a story-teller -- and perhaps she's not quite sure she's ever escaped being in a story. A story that must end. And, in a way, this story is about making a version (a distorted version?) of our world play a part in pure story, pure fantasy.

I don't think I've come close to doing this book justice. But I can say that I loved reading it, and that it deserves as wide a readership as it can get.