A Backward Glance, by Edith Wharton 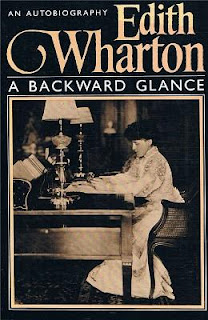 I have long enjoyed writers' memoirs, perhaps because they are usually well-written. It's not usually because their lives are all that exciting, after all! So when I found a cheap used copy of Edith Wharton's autobiography,  A Backward Glance, I snapped it up, and I have just read it. I will note that I say "autobiography", and that is what it is usually called, but the first edition of the book was simply subtitled "Reminiscences", which is perhaps more appropriate.

This book was published in 1934, three years before Wharton's death. It had been serialized in the Ladies' Home Journal the prior year (and it also incorporates some material from the Atlantic Monthly.) As such it might have been expected to deal with almost her whole life. And in a sense it does, but ... Well, to begin at the beginning, that's where the book begins. It opens with a scene from her very young childhood, which she calls her earliest memory, walking with her father in a new dress that she realizes she likes. There is some description of her family's roots -- and they were a prosperous family, on both sides, well established in New York society. There are early foreign travels, to Italy, Spain, France. And she discovers books -- though not novels, those are not allowed -- and she discovers story, and very soon is making up her own stories. By her teens she had written a novella, and had published some poetry. But it is clear that there was no expectation that a lady of her class would become a professional writer. 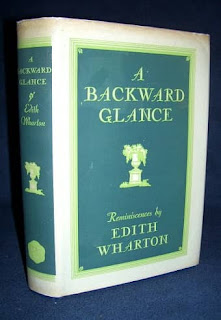 As she grows older we learn of her marriage, to Teddy Wharton, but we learn almost nothing of Teddy. His name is barely mentioned. It is clear in context that they did not get on, but you have to look outside this book to learn that he had mental problems, was eventually institutionalized, and that they divorced in 1913, having been long separated before that. There is mention of some apparently enjoyable travel they did early in their marriage -- a Mediterranean cruise, some carriage rides to obscure places in Italy, etc. And we do learn that Edith was fascinated by motorcars, and bought one as soon as she could.

We certainly never hear of her extramarital affairs. The name of Morton Fullerton does not appear in the book. Walter Berry is mentioned, at length, but there is no hint of a romantic attachment. (Apparently, there was a romantic attachment, though it's not at all clear it was ever consummated.) Berry does get full credit for his role as, essentially, her beta reader: he read her earlier works before they were published, and offered apparently very helpful advice, both positive and negative in tone.

So what else happened in her life? She moved permanently to France in 1907, having previously built a country home in Massachusetts. And she met a lot of people! And -- perhaps most eventfully -- she had a "good war", as it used to be said, during the Great War. She was in Paris, and there was a need for help in caring for refugees. Wharton took the lead in organizing a great amount of this -- fundraising, training women volunteers, arranging housing and medical help. She is fairly self-deprecatory about her efforts, but after the War she was awarded the Legion d'Honneur by the French government.

So, if we're not going to hear about her marriage or her love affairs, and if we're not going to hear much about actual events qua events in her life, why read this book? The obvious first answer is -- what does it tell us about her writing? And in this area it's maybe a slight disappointment. It's not that there's nothing about her writing -- but there's not a lot. She does discuss the genesis of her first book, a surprisingly influential work on, of all things, interior decoration, The Decoration of Houses, written with Ogden Codman. She also discusses her early short stories, mostly in Scribner's Magazine, such as "Mrs. Manstey's View", and the first story collection, A Great Inclination. After that her writing gets less attention, though many of her books do get a look. Her first novel, The Valley of Decision (which I must read!), is touched on; as is the success of The House of Mirth (and the failure of a play based on it); and Ethan Frome is mentioned (at that time still considered arguably her best (short) novel), but mostly to complain that people said she knew nothing about people like those in Ethan Frome, though at the time she actually had a home in the area where the novel is set. The Age of Innocence is mentioned partly to express surprise at its commercial success. (I don't think the Pulitzer it received is acknowledged.) And, to the disappointment of many readers, she doesn't really discuss the depths of her imagination, nor, very much, the mechanics of her writing process. I think we have to acknowledge that she simply wasn't interested in such a discussion.

So what else is there? Well, what there is is extensive exploration of her many friendships. First among these by far is Henry James. An entire chapter is given to him, with much discussion of James' personality, his habits, his eccentricities, his endearing qualities, his novelistic theories. There are accounts of various day trips she and James took when she visited him. There are accounts of his occasional criticism of her writing (which, on the whole, he admired.) There are additional anecdotes of seeing James at her home in the US, and later in Paris. It is all very generous, and interesting.

And there are numerous additional friends to mention. Walter Berry, as mentioned. The great ghost story writer and esthetician Vernon Lee. The Parisian hostess the Comtesse de Robert Fitz-James. Ogden Codman. Jean Cocteau. Mrs. Humphrey Ward. The Royall Tylers. Egerton Winthrop. Theodore Roosevelt. Howard Sturgis. Edward Burlingame. Mrs. Charles Hunter. And so on. Many of these names, presumably prominent in their time, are forgotten now; but some -- Cocteau and Roosevelt and of course James -- are famous still, and others have underground reputations that continue, such as Vernon Lee and Mrs. Humphrey Ward. One might suspect Wharton of namedropping, but I don't think that's the case of all. These were her friends and acquaintances, and she treats them all with warmth and generosity.

So, this isn't a scandalous autobiography, nor a particularly psychologically acute autobiography,n or the story of an adventurous life. But it is continually enjoyable, and -- as we expect from Wharton -- exceptionally well-written. I will conclude with a couple of interesting excerpts (of sorts.)

First, her quick mention of when literature caught fire for her, upon receiving editions of Keats and Shelley as a birthday present: "Then the gates of the realms of gold swung wide, and from that day to this I don't believe I was ever again, in my inmost self, wholly lonely or unhappy."

Second, an account of a story told to her by Jean Cocteau. I wrote this up for Black Gate, so here's a link: Wharton, Cocteau, and an ancient tale