Another John Brunner birthday, another Ace Double review! John Brunner in his early super-prolific period (up through about 1965) was reliably entertaining and always thoughtful, if often also a touch, er, hurried. 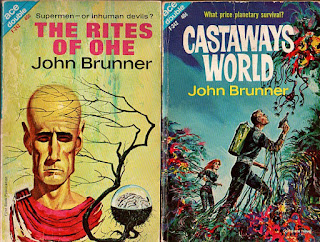 Another Ace Double pairing two John Brunner stories. Castaways' World is about 45,000 words, and The Rites of Ohe about 46,000 words. Amusingly, Ace had all kinds of trouble with the title of Castaways' World: the front cover has it Castaways World, no apostrophe, and the spine has Castaways' Worlds, an extra plural. I shouldn't carp, though: in an earlier review of Brunner's Zarathustra books (of which Castaways' World was the second), I got it wrong too: Castaway's World. The covers are by the two Eds: Valigursky and Emshwiller.

Castaways' World is, as I have said, one of Brunner's three Zarathustra Refugee Planet novels. These concerned the aftermath of the sun of a human-colonized planet in a future galactic polity going nova. A desperate effort resulted in a bunch of ships fleeing the nova in more or less random directions, settling new planets without much care as to their habitability. Castaways' World was revised and expanded in 1974 for a DAW edition called Polymath, to about 62,000 words. As with most of Brunner's many revisions of his novels, the changes are modest expansions and prose refinements throughout the book: no new scenes, no changes in the plot.

The book is set in the immediate aftermath of two ships from Zarathustra crashlanding on a planet. The viewpoint character is Lex, who turns out to have been in training to be a polymath. A polymath is an enhanced individual who serves at the point man for colonizing a new planet. Lex has many but not all of the skills a polymath would have -- what he mostly lacks is specific knowledge of this particular randomly arrived at planet. His starship crashed on the seashore. After a long winter his group has survived, outside the ship, and indeed their ship has foundered in the ocean. It is clear that they will have to make a permanent life on the planet, with limited resources.

The other group crashed inland, and they holed up in the ship over the winter. But as spring arrives it seems they have all died. The seaside group begins to set up the rudiments of a colony. There are stresses, many centered about a promiscuous young woman named Delvia. In particular, a teenaged girl has formed a Lesbian attraction to Delvia, only to be rejected when the older woman finds men available.

Then an expedition is sent to the site of the inland starship. It turns out this group has survived, but under terrible conditions. They continue to believe that they will be able to refurbish their ship and head for another, more hospitable, world. The Captain has basically enslaved the passengers. Naturally they resent the comparative success of Lex's group -- setting up a dramatic resolution. The novel is very enjoyable, often thought-provoking though at times a bit forced -- on the whole good stuff.

The Rites of Ohe opens with a young woman sneaking into a hotel room. It turns out she is convinced that something happened to her lover there a few months previously -- this was the last place he was seen before he disappeared. Nobody believes her, but then a chance confrontation with Karmesin, one of a small group of human immortals, changes things. Karmesin becomes convinced that something strange did happen.

Karmesin's investigations quickly focus on a the mysterious non-human, though very humanoid, residents of the planet Ohe (called that because it has no heavy elements). The residents of Ohe are regarded as experts in sociology, and they have been recruited to help diagnose something called the "Phoenix Mystery", a violent cult plaguing the human worlds. The Oheans are a much older civilization than humans, but hamstrung by their lack of heavy metal, they never really explored beyond their planet.

The mystery inevitably leads Karmesin to Ohe itself, and to some surprising discoveries about the real motives and real accomplishments of the people of Ohe. It's a pretty interesting book, though perhaps just a bit slight -- I think it might have worked better at about half the length. It's also, as with a fair amount of Brunner novels, a bit subdued in tone -- not quite morose but not triumphal, either. Solid work, though, and more evidence that you can will almost never fail to be entertained by a Brunner book.