Birthday Reviews: Bones of the Moon (plus some short stories), by Jonathan Carroll

Jonathan Carroll's birthday was a few days ago, but I didn't have a chance to post this short selection of reviews until today. Carroll is a really intriguing writer, and I have generally loved his short fiction, but struggled just a bit with the novels I've read. (I say struggled, and that's true, but I still enjoy and am fascinated by them.) I need to read some more of his novels, anyway. Here is a quick look I did for my old blog at Bones of the Moon, plus a few short things I've written for Locus about his shorter work.

Blog review of Bones of the Moon 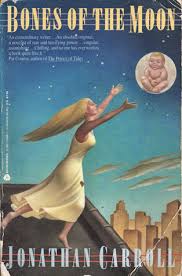 Bones of the Moon is a novel by Jonathan Carroll.  Carroll is one of Glen Engel-Cox' favorite writers, and as it happened I had picked up a copy of this book for a song some years ago, at one of those roving remainder stores.  I have read some stories by Carroll before ("Friend's Best Man", "Uh-Oh City" and "Alone Alarm"), and I had been intrigued by his quite unusual imagination: almost whimsical, but darker and wilder.  He is a fine writer, too, but based on the sample of his work I've seen, an indifferent plotter.

The above comments apply pretty well to this book, anway.  Either that or I'm seriously missing the point. The story is the first person narration of Cullen James, a young New Yorker who lives upstairs from a serial killer. This revelation is made on the first page, and serves to imbue what otherwise seems to be a sunny novel with a sense of dread. Cullen is married to an ex-basketball player named Danny James (who, like Danny Ferry, played in Italy (coincidence, I'm sure)): she quickly narrates their long friendship/courtship, the precipitating event of which is her difficulty coping with an abortion after a loveless relationship. These early chapters are a pure and believable love story. But, pregnant with a child by Danny, she begins to have sequential dreams of an odd fantasy world, populated by toys from her childhood, and accompanied by her first child, obviously the aborted baby. Eventually they begin a quest to find the five "Bones of the Moon". At the same time she befriends another neighbor, a gay man, and through this friend she meets a strange filmmaker, who becomes obsessed with Cullen. Some of her fantasy world becomes entwined with the real world, in difficult to understand but disturbing ways.

The resolution is shocking, and a bit ambiguous. It's not quite unearned, but it still seemed, oh, slightly forced, to me.  I freely admit that I didn't "get" all of it, though I'm not sure that it is all supposed to make coherent sense.

The strong points are the fine writing, and the wonderful, wild, imagination. As I say, I felt a bit let down by the plotting. The characters were extremely well drawn, and individual, but perhaps not quite real: or should I say, not people I quite recognize. I except Danny James here, who is extremely well-drawn and real (but who disappears to some extent towards the end). All these caveats aside, the book has some real power, and some real and effective weirdness.

Sympathy for the Devil review from Fantasy Magazine

Sympathy for the Devil also includes excellent recent work, especially Jonathan Carroll’s “The Heidelberg Cylinder”, a distinctly offbeat story about the dead returning because Hell is running low on space.

The very big “little magazine” Conjunctions has a history of being hospitable to the fantastic, and again we see this is number 56, called “Terra Incognita: The Voyage Issue”. Names familiar to genre readers include Peter Straub, James Morrow, and Jonathan Carroll (and by all means read the stories by writers from outside the genre too!). My favorite was “East of Furious”, by Jonathan Carroll. It’s about the platonic relationship between Beatrice Oakum and her divorce lawyer, Mills. Eventually Beatrice convinces Mills to tell her the story of one of his previous cases, involving a modern alchemist and her Russian husband. The story – and its eventual intersection with that of Mills and Beatrice – is twisty and clever and witty and ultimately rather dark. Lovely work.

There’s some nice stuff in November at Tor.com as well. “The Loud Table”, by Jonathan Carroll, opens with four older men who regularly sit and gab at a coffee shop. They’re morning the loss of their fifth, who just died of cancer. And of course they discuss their own maladies, including the one so many of us fear, Alzheimer’s. (I assume by us I mean all of us but I’m 57, so perhaps I just mean us old men!) One of the men discusses his memory loss – which makes him fear the disease, of course. For example, this one beautiful girlfriend … And the narrator makes him an offer … I’ll let Carroll reveal the sting. It’s a modest story, but enjoyable and expertly told.