Birthday Review: Stories (and a novel) by William Browning Spencer

William Browning Spencer had his 74th birthday on January 16. Slightly belatedly, then, here's a review of a few of his short stories, including a collection, plus a brief review of his novel Resume with Monsters. Spencer is a really cool writer -- alas, I've seen nothing for several years now. I've compared him to the likes of Brad Denton, Jonathan Lethem, Don Webb, and Jonathan Carroll. Comparisons can be invidious -- Spencer is his own inimitable writer -- but perhaps those writers define the sort of weird and utterly original space Spencer inhabits.

This issue's third short story is one of the brilliant ones: "The Foster Child", by *William Browning Spencer.  (His novels Resume With Monsters and Zod Wallop are pretty darned brilliant as well.)  This is a story of a young girl who speaks only in quotes from poems, poems which she can never have encountered.  Does she somehow have direct access to the Muse, the source of poetic inspiration?  Spencer doesn't back off from his concept, but takes it to a striking conclusion.  Neat stuff.

"The Essayist in the Wilderness", by William Browning Spencer, is a nicely offbeat story about a lottery winner who decides to become a nature writer, only to be betrayed by his lack of knowledge of such things as crayfish.

William Browning Spencer returns with “Stone and the Librarian” (F&SF, February), a decidedly odd piece combining ingredients from Marcel Proust and Robert E. Howard, not to mention Hemingway and Burroughs.

Review of Subterranean: Tales of Dark Fantasy 2 (Locus, May 2011)

Also at some level horror -- almost Lovecraftian – is William Browning Spencer’s “The Dappled Thing”, which opens in an almost Steampunk mode, with an airship crossing form England to Brazil to try to rescue a proper English girl from her seducer, but which turns darker when the girl is found near a pool feared by all the local people – a pool containing the title creature. The conclusion is strongly dark in contrast to an at times almost jaunty earlier story.

Review of The Return of Count Electric 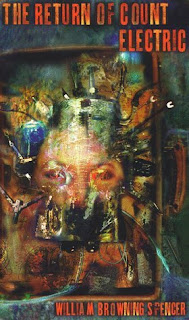 The Return of Count Electric and Other Stories  is the first story collection from the author of such fine novels as Zod Wallop and Resume with Monsters, William Browning Spencer.  It dates to 1993 or so, though my copy is a nicely presented 1998 paperback from White Wolf's Borealis imprint.  Spencer is an off-beat writer who might be compared to Jonathan Carroll or Bradley Denton.  His stories are usually set in the present day, and feature fairly ordinary people confronted with rather weird happenings -- for example,  Resume with Monsters  concerns a failed novelist and temp who must resist the incursion of Lovecraftian monsters into our world.  The off-beat elements in this collection are usually not even fantastical -- suddenly homicidal wives, serial killers, even entomologists fighting in the backwoods of Central America may be strange and horrific, but they aren't fantasy.  Most of the stories here are quite short, and kind of humourous while also disquieting. For instance, "A Child's Christmas in Florida" concerns a very poor family whose kids think Christmas involves picking a nice family from whom to steal all their presents.  "Best Man" concerns a man's long time friend who is always screwing things up, which the man's wife finds very irritating.  The "best man" offers an extreme way of redeeming himself to the wife -- with unfortunate results.  And "Looking Out for Eleanor", the story which most directly reminded me of Brad Denton (in  Blackburn  mode), follows a loser who hooks up with a simple-minded but very beautiful woman, and becomes a serial killer in order to protect her from supposed threats to her virtue.  A straight-laced social services representative follows them from Texas to Florida, for similar reasons.  The main attraction of these stories is the strange central characters, who somehow come off as human despite being quite around the bend.

Review of Resume With Monsters 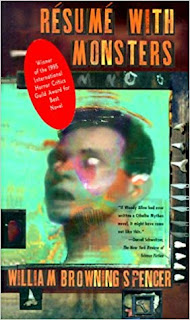 When last I read a William Browning Spencer novel I compared him to Jonathan Carroll and Jonathan Lethem.  Later I added Brad Denton to the list.  Having read, finally, Spencer's  Resume with Monsters , and perhaps more importantly, two Don Webb novels, I am prepared to say that Spencer also has points of resemblance with Don Webb.  Well, one thing's obvious: they write weird quasi-SF novels set in Austin, TX.  But, really, reading  Resume with Monsters  I did think quite often of, especially,  Essential Saltes by Webb.  Not to the denigration of either book, mind you.   Resume  is about a failed novelist working in a series of dead-end temp jobs, who discovers that the Old Ones from Lovecraft's Cthulhu Mythos are using the horrible corporation he works with as points of entry to try to take over the Earth.  This discovery, and his reaction to it, cost our protagonist, Philip Kenan, his girlfriend. She runs off to Austin, and he follows her, basically stalking her.  But his luck changes a bit, as his novel finally gets published, and earns him one devoted fan, and as he meets a skeptical retired psychologist.  But his old girlfriend is still in the grip of an evil corporation, and Philip must decide whether he can ignore his knowledge about the Old Ones and live sanely like his psychologist wants him to, or whether he will risk everything to save a woman who is engaged to someone else and who he no longer loves anyway.  And will she thank him for that?  This is quite a good novel, often very funny, often moving, quite sharp about the depression caused by a broken relationship, and bitterly satirical about the way of corporations.   Definitely worth reading.
Posted by Rich Horton at 8:54 PM