Late to the Party Review: The Fifth Season, by N. K. Jemisin

Late to the Party Review: The Fifth Season, by N. K. Jemisin

Maybe I will start a set of "Late to the Party" reviews -- books that I somehow failed to read that have been widely praised, and that when I finally get to them I realize really deserve the praise.

So it is, anway, with N. K. Jemisin's The Fifth Season, which won the Hugo as Best Novel of 2015. Now mind you, at the time of the Hugo voting in 2016 I had only read one of the nominees: Ann Leckie's Ancillary Mercy. Indeed, until I finished The Fifth Season yesterday, that was still true (I did start Seveneves, by Neal Stephenson, but I put it down and somehow never got back to it. Also, Uprooted, by Naomi Novik, has been on my TBR pile for a long time.) I'm not proud of that, mind you -- but I have a hard time keeping up with novels! (For all of 2015, I have, even now, only read a few more of the highly praised novels: from the Locus Recommended Reading list I have, to date, read Nicole Kornher-Stace's Archivist Wasp, David Mitchell's Slade House, Kazuo Ishiguro's The Buried Giant, Gene Wolfe's A Borrowed Man, and Elizabeth Hand's Wylding Hall (which I thought was a novella). There are a couple more on my TBR pile still: Jo Walton's The Philosopher Kings (it took me a while to get to its predecessor, The Just City), Carolyn Ives Gilman's Dark Orbit, and Elizabeth Bear's Karen Memory, to name three.

So I can now agree that The Fifth Season absolutely deserved its Hugo. (Granting that it's possible that reading one of the other nominees could change my mind.) Moreover, of all the other 2015 novels I've read, only The Buried Giant would tempt me to vote differently. (And that's by a Nobel Prize winner!) 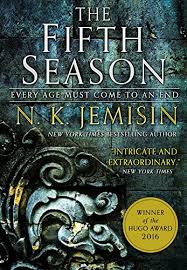 I'm not the first person to say this, but I may as well add my voice to the chorus: the most impressive part of The Fifth Season is the worldbuilding. (Which is funny considering the collective name of the trilogy it begins is kind of the opposite: The Broken Earth.) This worldbuilding encompasses, as good worldbuilding should, not just the physical (geological and geographical and technological and magic system etc.) aspects of its world, but the social system, and the history. This is a tremendously impressive imaginative feat, always surprising, eminently satisfying, and above all constantly interesting.

This isn't to say the plot is lacking interest either. The novel opens dramatically, with a man and another creature, a stone eater, magically ripping open a fault line across the entire continent on which most people live, a continent called the Stillness, despite its extreme tectonical instability. This fault leads inevitably to a series of earthquakes and volcanos and lesser faults and aftershocks, as well as a cloud of ash. The result will be a "Fifth Season" -- a time of extreme cataclysm during which people must hunker down and live off stored food. Most Fifth Seasons last a few months, it seems -- they have happened, for a variety of reasons, throughout the history of the Stillness. But this one will last years.

Already we have questions -- for one, where is the Stillness? Is it on Earth? Another planet? A magical realm? Far future or far past? (By the end, while we don't know for sure, it is beginning to look like this is set on a much-changed Earth in the very far future.) And who or what are these "stone-eaters"? (We learn more about them as the book goes on, but many questions remain.)

The action shifts to the south of the continent, and a woman named Essun, who is mourning her son, beaten to death by her husband a couple of days earlier. This woman has a secret -- she is an orogene (or, more insultingly, a "rogga"). So was her son, and apparently his father killed him on learning his true nature. Orogenes can control, to an extent, the Earth, and they can use energy from the Earth for other things, dangerous things, which is why they are feared. Essun saves her village from the immediate effects of the disaster, then heads out to find her husband and her daughter.

At other times, presumably before the disaster, we meet two more women, both orogenes. One is a girl, Damaya, abused by her parents who fear her talents, who is taken away by a strange man, to the capitol city, Yumenes, and the "Fulcrum", where orogenes are trained. At first this seems a rescue, but soon we realize that the orogenes of the Fulcrum, even if they live fairly comfortably, and have status, are also slaves, and subject to considerable abuse. The third thread follows Syenite, a young woman of considerable talent: a "four ringer" orogene. She is assigned a significant task -- to travel to a coastal city and use her orogenetic abilities to clear its harbor. But she must do it in the company of a ten ring (the maximum) orogene, Alabaster: and they are required to have sex until Syenite is pregnant -- the Fulcrum desires more and more orogenes children to control.

You can probably guess the connection between Damaya, Syenite, and Essun, though it took me a while. Damaya's thread serves to introduce us to the place of orogenes in this society. Syenite's is perhaps the most significant -- on her journey she encounters a couple of illuminating items -- the "node controllers", orogenes who maintain seismic calm across the continent; and also obelisks -- apparently created by "deadcivs", and seemingly sources of tremendous power. Most significantly, she finds the harbor she is supposed to clear actually blocked by an obelisk, and her efforts to move it have profound effects -- and end up with her and Alabaster on the run.

Everything knits together very well. It can't be said that the plot is wholly resolved -- this is a trilogy, after all -- but it does come to a reasonable conclusion, complete with slingshot to the next volume. It's powerful stuff -- a society that at first glance seems fairly prosperous and just, if not perfect, is revealed as terribly broken, bitterly unjust in almost every detail. The main characters -- none of them really likable -- are broken, and do terrible things, but seem horribly justified most of the time. It's urgently readable, continually fascinating, and quite powerful by the end. A real triumph.

Here, by the way, is my review of the conclusion to the trilogy, The Stone Sky.