A review of Paul di Filippo's The Big Get-Even

The Big Get-Even, a novel by Paul di Filippo

Paul di Filippo is best known as an SF writer, with 10 or so novels published in the field, and numerous shorter works since his debut in the legendary magazine Unearth some four decades ago. I have found his short fiction (and novellas, a particular strength of his) immensely enjoyable: I'd mention in particular "The Mill", "Mairzy Doats", "Karuna, Inc.", "Wikiworld", "A Year in the Linear City", "The Jackdaw's Last Case", and the stories of The Steampunk Trilogy.

His latest novel, however, is a contemporary crime caper, The Big Get-Even. As such it might easily escape the notice of SF readers. But it's worth seeking out -- it's a lot of fun, sexy and twisty and humorous. 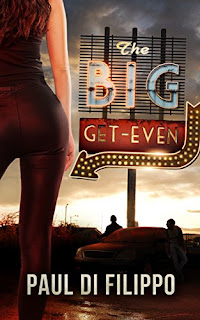 Glen McClinton was a crooked lawyer and a heroin addict before he got caught. Now he's out of prison, on parole, but disbarred and as such without much in the way of a means of earning his keep. He's living with his retired uncle, eking out an existence on some gold he managed to hide from the authorities. One night the car in front of him stalls at the stoplight, and he investigates and finds the driver in a drugged stupor, and uses his Narcan spray to revive him -- a fellow heroin addict, evidently.

A few months later the man he saved, Stan Hasso, visits him with a scheme -- Stan is looking for revenge on his old boss, a crooked real estate developer named Nancarrow, who let him take the fall for a series of arsons ordered by Nancarrow and executed by Stan. Stan's scheme is to convince Nancarrow that a certain plot of land upstate is the land a casino developer needs for his project. They can get Nancarrow to buy the land from them at an inflated price. Stan just needs Glen as the front man, and also Glen's lawyerly ability. He has a couple more confederates -- a woman whose parents lost everything as a result of Nancarrow's manipulations, and that woman's Aspergerish student, a computer hacker. Oh, and Glen's gold money will be useful to buy the property.

Against his best judgement, but a little desperate, Glen decides to help. They buy the property, a rundown lake resort. Glen, who has been without female companionship for a long time, finds himself distracted by Stan's lush and luscious girlfriend Sandralene, and by Vee Aptekar, the woman out for revenge, who seems to be a bit of an ice queen. But part of their scheme involves actually getting the resort up and running again -- and in so doing they hire some folks from the nearby economically depressed city, mostly immigrants from Cape Verde, led by a gorgeous young woman named Nellie Firmino.

So the plot unfolds. The resort is soon open, and operating, though at a loss. The hook is set for Nancarrow. The problem is, Glen has fallen for Nellie, with whom he is soon sleeping. And he feels like a heel for disappointing her and her Caboverdean friends, who are thrilled to have jobs again. But they're still losing money, and Stan and Vee want their revenge, and things are well in motion and impossible to stop.

The reader sees the outline of the logical conclusion well in advance, but Di Filippo negotiates the way there slickly, with a nice and believable twist, that resolves some of the implausibilities that had bothered me. There is also a final twist -- again, what we expect all along, but nicely revealed. It's a fun ride the whole way. Granted, there are remaining implausibilities, including the easy way Glen gets all the sex he wants (and more), from several stunning women. And their scheme never really made much sense to me -- but that aspect is actually made believable by the end. This is a wholly enjoyable caper novel, with antiheros we can root for, and real villains who are bad guys indeed. It's light on violence and heavy on sex and comic turns. Fun stuff.
Posted by Rich Horton at 8:29 PM