I call this novel "forgotten", and I believe it is, largely, but its author is not forgotten in SF circles, particularly fan circles. Arthur Wilson Tucker was born in 1914, and was brought up in Bloomington, IL, where he lived most of his life. His primary career was as an electrician and projectionist. He was an active fan since the early '30s, known to everyone as Bob Tucker.  He published the legendary fanzine Le Zombie beginning in 1938, as well as The Bloomington Newsletter, and The Neo-Fan's Guide. He won the Best Fanwriter Hugo in 1970, a retrospective John W. Campbell Memorial Award in 1976, and a couple of Retro-Hugos as well. He was particularly famous for the ritual of "smoothing" -- a group of people would gather round, pass around a bottle of Jim Beam, take a sip, raise their hands, and when all were done, say "smooooth" and swoop their hands down. I was "smoooothed" at my first convention, ConQuesT in Kansas City in 1998 or so -- that was the one time I met Bob Tucker. He died in 2006, shortly after his wife of 52 years, Fern, had died.

Tucker was also a professional writer, of both mysteries and SF, usually as by Wilson Tucker. His first novel, a mystery set in fannish circles called The Chinese Doll, appeared in 1946, and his last, the well-regarded SF novel Ice and Iron, in 1974. His best-remembered novels are The Lincoln Hunters (1958), The Long Loud Silence (1952), The Year of the Quiet Sun (1970) and Ice and Iron (1974, expanded 1975). I've read The Lincoln Hunters, Wild Talent, and Ice and Iron. He was said to be determinedly retired from writing after Resurrection Days appeared in 1981. (He apparently sold a novel outline to Harlan Ellison for The Last Dangerous Visions after much prodding, so there may be one unpublished work awaiting, though Tucker also apparently said that that was one story he wouldn't be eager to have unearthed.)

Tucker is also famous for having coined the term "Space Opera" (quite a disparaging term in his hands), and for the practice called "Tuckerization": using names of friends for fictional characters.

His novels were noted for their generally rather bleak tone, a refusal to flinch from the worst implications of his ideas and of the world he saw around him. (This perhaps in contrast to his personal amiability.) This applies to Time Bomb, indeed, though perhaps not wholly effectively -- the novel is somewhat clumsily executed, and uneasily tied to an earlier novel, The Time Masters.

I read the 1957 paperback reprint from Avon, retitled Tomorrow Plus X. The original novel was published in 1955 by Rinehart and Company, who were Tucker's publishers, for both mystery and SF, from his first novel at least throughout the '50s. 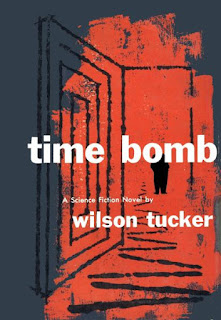 The opening chapter, in several brief sections, introduces a comedian spoofing time travel, an Illinois State police Lieutenant called to the site of a mysterious bombing, a rally for a popular populist politician, an old man working on a device of some sort, an urbane couple watching the comedian with distaste, and a telepath. The connections seem unclear at first. We are soon following Lieutenant Danforth as he continues to investigate the bombing, which is the sixth in a strange series that seemed aimed at associates of the populist politician Ben, the leader of the "Sons of America" movement. (Ben was surely modeled on Joe McCarthy at the time of writing, but yes, he does remind the contemporary reader uneasily of Donald Trump.)

Danforth is soon fired, for the crime of not having solved the bombings. But the department's telepath, a very influential man, arranges for him to keep working on the case surreptitiously. Danforth has fixed on the notion of bombs travelling through time as the means. He is pointed in the direction of a couple who just moved into the area, Gilbert and Shirley Nash. He goes to meet them -- they are a strange couple, and they had an odd history at their previous job, working at Oak Ridge (evidently this was the subject of The Time Masters). Soon it is revealed that Gilbert Nash is actually Gilgamesh, and he's 10,000 years old. Shirley is apparently also slow to age, though she's only a few decades old at this time. Danforth falls in love (hopelessly) with Shirley.

A fortuitous finding of a failed bomb in a nearby field gives Danforth the break he needs, and some good old fashioned detective work leads him to the criminal. Who seems glad to be found. But of course his secret involves time travel -- and he claims to know the future ... What will Lt. Danforth do with this knowledge?

The book is really kind of a mess. Gilbert and Shirley Nash seem wholly unnecessary characters. The explanation of how the "time bomb" worked never made much sense to me. And the conclusion, meant to be heroic (which it is, I suppose) also seemed strained. Tucker did much better in books like Ice and Iron and The Year of the Quiet Sun. (An interview from 1975 conducted by Dave Truesdale and Paul MacGuire III for Tangent mentions a novel about Gilgamesh that he was a couple of chapters into then: he must have abandoned that. I wonder if that was intended to be a third Gilbert and Shirley Nash story?)
Posted by Rich Horton at 6:00 PM