J. A. Mitchell (1845-1918) was a fairly major figure in American publishing, as the founder of Life magazine (which was more news than picture oriented in its early days). He was also an architect of some note. And in his spare time he wrote six novels and a number of short stories, many of them of interest to readers of fantastika. Most famous to those interested in SF history is The Last American (1889), a satirical look at a Persian expedition to a ruined America a millennium in the future. One other SF novel is Drowsy (1917). Worthwhile details can be found in the Science Fiction Encyclopedia entry on Mitchell. 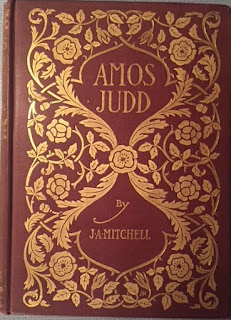 Mitchell's most famous novel in his lifetime, however, was Amos Judd (1895). This too is a work of the fantastic, though closer to fantasy than science fiction, and though set mostly around the time of composition. Amos Judd was first published by Scribner's in 1895. It didn't make the Publishers' Weekly list of top ten bestsellers its year but it sold quite well -- I saw online a copy of the 8th printing, from 1896. My edition is from 1901. It is illustrated in color by A. I. Keller. It is signed on the first leaf "S. A. Y. Christmas 1901".

Amos Judd opens with a train reaching the Bingham Cross Roads station, in Connecticut. Three passengers alight, two adults and one boy of about 6 or 7, all foreigners. They proceed to take a carriage to the village of Daleford, looking for Mr. Josiah Judd. On the way there the boy insists they stop at a house on the way -- Josiah Judd will be there, he avers. And indeed that turns out to be true.

The boy is a young Rajah from a Northern Indian state that has just undergone a revolution. Josiah's brother Morton is a successful merchant in India, and he has sent the young boy to his brother to raise, away from the turmoil in his home. Josiah Judd is a successful farmer, childless, and he and his wife take the boy, saving the large fortune in jewels and other things that he has with him for his majority. 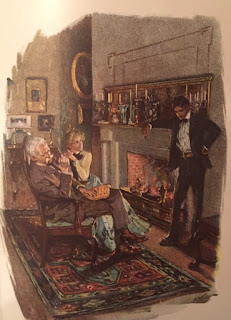 Twenty years later, Josiah is dead, and the boy, now called Amos, has inherited his farm. Amos has made quite a success of it, partly through his love of animals, and partly by using the capital derived from his Indian inheritance. Amos also attended college and made a number of friends -- and some enemies, one of whom he killed (partly by accident) when insults were traded. In New York, Amos is at a party and makes the acquaintance of the beautiful Molly Cabot. Amos' initial reaction is strange, and Molly is at first taken aback by the story she hears of his killing his classmate. (To everybody's credit, Amos' Indian background is never seen as an impediment to his eventual courtship of Molly.)

By happenstance, Molly and her father decide to summer in Daleford, unaware that that is Amos' home. But once there, things take their natural course, and the two young people become closer and closer. Amos also makes friends with Mr. Cabot. And he reveals his one unusual talent: he can, if he chooses, see future events. (This is how he knew Josiah Judd would be at another house when they came to Daleford.) However, he cannot change the future -- anything he sees must happen. Even if he tries to change the future, it will still come to be. Mr. Cabot cannot believe this, but he puts it to the test by asking Amos what he (Mr. Cabot) will be doing the next day, and when he tries to do something different he finds he has lost all volition.

There is some discussion of a philosophical nature on the implications of this talent of Amos', which is, in his Indian family, ascribed to a gift of Krishna after an ancestory helped one of Krishna's Earthly incarnations. (This bit didn't make much sense, as one ancestor used his ability to help him extend his territory by winning important battles -- which seems to contradict the notion that the future, once seen, cannot be changed.) At any rate, Molly and Amos' love affair proceeds apace, though Amos at times seems distracted and distraught -- and we quickly guess the reason -- he must have foreseen his own death.

And so of course it turns out -- Molly and Amos marry, and they have a fine honeymoon. Amos and Mr. Cabot have tried again to cheat fate -- and it seems it has worked, for they have hidden Amos away on the supposed day of his death, and he has survived. But, in the melodramatic conclusion, Molly is attacked, and Amos comes to her rescue, and kills the attackers, but is shot in his turn ... with a calendar present showing the wrong date!

Really, I've made this sound sillier than it is. It's actually a well-executed novel, and the inevitable conclusion is well set up, and faced with honesty. It's quite affecting. This is not a great novel (short novel -- it's about 35,000 words), but it's not bad.

It was made into a movie in 1922, The Young Rajah, starring Rudolf Valentino. The movie bollixed things quite a bit, especially at the end, where, predictably for Hollywood I guess, Amos actually manages to cheat his fate, and survives the attack on his life, and indeed returns to his Indian kingdom, Molly by his side, to regain his crown.