This was not, to be sure, a bestseller. But it represents a genre I take an interest in -- popular romance. Romance novels as a separate genre seem to have started around 1920. Some cite E. M. Hull's The Sheik. Right around the same time Georgette Heyer began to publish. Really, the "genrefication" of fiction was just beginning at that time -- that is, the establishment of magazines and publishing lines devoted to a specific category. Famously, of course, the first Science Fiction magazine appeared in 1926. Other magazine categories were established at around that time as well. Juvenile fiction as a category appeared a bit later -- in the '30s. Mills and Boon began concentrating on category romance in the 1930s. (Harlequin, which now owns Mills and Boon, was founded in Canada in 1949.) 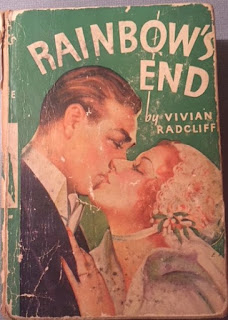 This novel, Rainbow's End, was published in 1936 by Phoenix Press. They seem to have been a firm that specialized in rather lurid fiction in several categories. They've been called "Depression Era Pulp". By all accounts they didn't pay well -- and they got what they paid for, if this book is any indication. I can't find any information about the author, Vivian Radcliffe (which certainly might be a pseudonym, though I don't know that for sure).

As for the book itself, it's rather absurd. Marianne Cutting is a young woman working in New York. Her parents died a year or two before -- her father was a Professor at an upstate university. She is just getting by financially, while carrying on a secret relationship with Avery Pratt, a prat (we learn eventually) studying at West Point. He's a rich prat, though. then one day someone slips her a package. It has a ticket on a round the world cruise, and a couple of thousand dollars for expenses, and a passport in the name "Ann Lewell". She tries to find "Ann Lewell" but can't find any evidence she exists. Desperate for adventure, she decides to take a chance and take the cruise.

Once on board she meets a woman who darkly hints that she knows what's going on, and who insists that Marianne give her any cables they receive addressed to Ann Lewell. She also meets a handsome lawyer named Garth Cameron -- and before long they are in love. But will Marianne confess to Garth her real name?

More to the point, we learn, will Garth confess his role in this whole thing? For he it was who arranged for Marianne's trip. His law firm was engaged by Avery Pratt's mother to bribe Marianne to drop Avery -- she is totally unsuitable, at least in Mrs. Pratt's eyes. But Garth, on seeing Marianne dancing with Avery, fell immediately in love with her. He wants to pry her away from Avery, so uses the Pratt bribe to buy her this ticket ...

Well, some problems intervene. There is the mysterious girl who wants all "Ann Lewell's" cables, for example. And there's another guy who falls for Ann Lewell -- and a woman who loves that guy and who befriends "Ann". And there's discord between Garth and Marianne when each learns just a portion of the other's real story ...

Well, it's all really stupid. And it's dreadfully written. And there's no chemistry between the main characters, and ... well, I could go on. The book is what it is -- a bad example of a genre that is indeed much disparaged, but which can be quite enjoyable at its best. However, books like Rainbow's End are the reason the genre is so much disparaged.