(In a completely unplanned coincidence, this book was also covered by Jerry House as his contribution to Friday's Forgotten Books.)

This wasn't really an Old Bestseller, but it was a piece of popular fiction by a writer who wrote some good selling novels. That said, at least according to Wikipedia, the failure of this novel to sell very well caused Arnold to cease writing. (Though John Clute points out that each of his books came out from a different publisher, with this last from quite an obscure house. (The other three came out from reasonably prominent firms.) This could well be an indication that each firm was not too pleased with sales.)

The other thing this book is is a once-forgotten, but fairly significant, work of proto-SF. It was rediscovered, it seems, by Richard Lupoff, a fine SF and mystery writer who is also an expert in comics and pulps -- and on Edgar Rice Burroughs. (Lupoff wrote a book called Edgar Rice Burroughs: Master of Adventure, which was first published in 1965 and has been reissued with additional material at least three times.) In 1963 he was the editor-in-chief of the hardcover reprint edition of Edgar Rice Burroughs' novels, and when collector Stephen Takacs decided to sell his collection, he let Lupoff have a look at Lieut. Gullivar Jones, telling him it was a "Burroughs-type" novel. And, indeed, Lupoff upon reading it realized it was a direct ancestor of the John Carter novels, in featuring an American military man traveling by essentially magical means to Mars, encountering Martians of multiple races, and marrying a Princess. There seems little doubt that Burroughs read this novel, though it must be said that A Princess of Mars and its sequels are ultimately much different from the Arnold novel -- and, indeed, it must be said that Burroughs deserved his success, and that the failure of the Arnold novel, if not exactly deserved, is not much of a surprise.

Edwin Arnold (1857-1935) was the son of a poet, Sir Edwin Arnold (NOT Matthew!). He was English, of course. He had some success, it seems, with his first two novels, The Wonderful Adventures of Phra the Phoenician (1890) and Lepidus the Centurion: A Roman of Today (1901), both of which have fantastical aspects, mainly in the long lives of their protagonists. Lieut. Gullivar Jones appeared in 1905. Though there were other works set on Mars before it, the Science Fiction Encyclopedia calls it the first true planetary romance.

The novel was first published by S C Brown, Langham and Co., and in the US by George Bell and Sons. Lupoff suggested to Don Wollheim at Ace Books that he republish it (Burroughs was having something of a revival at the time. due to Lupoff's efforts to some extent). Ace published the paperback in 1964, Wollheim choosing the corrupted title Gulliver of Mars (note the misspelled first name). The cover is by Frank Frazetta. Since then it seems to have remained to a small extent in people's memories, aided by a comic book series (one of the writers of which was George Alec Effinger), by a New English Library paperback in 1977, by a Bison Books reprint in 2003, and even by the appearance of Gullivar Jones (along with John Carter) in Alan Moore's League of Extraordinary Gentlemen. My copy is a rather shabby example of the Ace edition that I found in a quite nice used book store in Tempe, AZ, run by a former Arizona State Professor and his wife, with whom I had a nice talk. 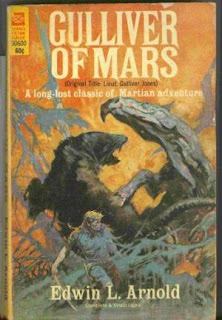 Spoilers abound ahead, though I really don't think this is a book that depends for its effects on plot.

As for the book itself, I have to admit I found it slow going at times. Gullivar Jones is a Lieutenant in the U. S. Navy, upset at not having received the promotion he feels he deserves (and thus unable to ask his Polly to marry him). In a bad mood, he by happenstance is on hand when a strange man falls to the ground wrapped in a carpet and breaks his neck. Jones ends up with the carpet, and, feeling terribly used by, wishes himself on Mars. At which point the carpet wraps him up and takes him there.

On Mars Jones falls in with a race of beautiful but terminally lazy people. His first friend is named An -- an androgynous person who turns out to be a woman, one of a race of slaves who thus cannot have children. An takes him eventually to the palace -- and tells him that a special ceremony is due, whereby the non-slaves draw lots to determine who they will marry. Jones spies the Princess Heru and falls desperately in love with her. (Alas for An, who seems all along a more worthy person.) Heru requites his passion, and arranges to fix the lottery so that Gullivar will become her husband. However, this race, which Jones calls the Hither people, are under the domination of another race, the Thither people, who demand a tribute each year, of among other things a beautiful woman to become their King's slave. Naturally, Heru is chosen and taken away.

Jones attempts to follow, and ends up on a desperate boat trip across a sea to the Thither land. By happenstance he ends up instead on the river (or canal) of the Dead (one of the more striking passages in the book), and upon escaping, falls in with some of the Thither people, finding them, on balance, much better people (harder working, more energetic) than Heru's people. He is taken by them for a ghost, and he manages, with a couple more adventures on the way, to make his way to King Ar-Hap's city. Here he demands Heru's return to him -- but a crisis intervenes in the shape of a slow meteor (don't ask!). Eventually he steals Heru away and escapes back to her people -- but Ar-Hap follows, and all seems lost.

Well, Gullivar Jones lands on his feet, and gets back to Earth and Polly -- and I suppose Heru turns out as well as she might have expected to also. And what of An? Well, neither we nor Gullivar ever find out.

Much of this is fairly light satire. Gullivar Jones isn't really much of a hero -- he's a bit obtuse, and he's not terribly successful at most of his adventures. Jayme Lynn Blaschke points out that the Hither and Thither folk seem based on Wells' Eloi and Morlocks (absent the cannibalism). As I said, I found it tedious at times, though there are some good bits as well. I'm glad to have read it, if mostly for historical reasons.