When I was a teenager I read a whole lot of different stuff (still do, to be sure). One sort of thing I read was contemporary bestsellers. I read the likes of Leon Uris, Herman Wouk (who struck me then as purely a writer of popular fiction (especially with The Winds of War), but who has a somewhat higher reputation, I gather, perhaps closer to Somerset Maugham territory ("in the first rank of the second raters")), Alastair MacLean, Helen MacInnes, even once an Arthur Hailey book. And I read some Paul Gallico. Gallico didn't really have many "blockbusters" -- his only novel to make the Publishers' Weekly list of the ten bestselling novels of the year was Mrs. 'Arris Goes to Paris (published as Flowers for Mrs. Harris in the UK) in 1959. He also wrote The Poseidon Adventure, basis for the blockbuster movie. And his early novella The Snow Goose was and remains very popular. I read Matilda, about a boxing kangaroo, as well as a couple of the Mrs. 'Arris books, with a fair amount of enjoyment.

Gallico was born in 1897 in New York City to recent immigrants. He graduated from Columbia after serving in World War I, then turned to journalism. He made a name for himself as a sportswriter -- in a way he was George Plimpton before Plimpton: for his first big story he sparred with Jack Dempsey (and was quickly knocked out). He founded the Golden Gloves amateur boxing tournament at this time, but began selling short fiction, and in 1936 he retired from sportswriting to concentrate on fiction. (Though his first book, Farewell to Sport, was nonfiction about sportswriting and his decision to leave it, and he also wrote the book about Lou Gehrig on which the movie Pride of the Yankees was based.) He moved to England for some time, and later lived all over Europe, ending his life in France. 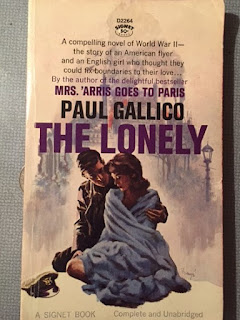 The Lonely is a very short novel, a little under 40,000 words. It was first published (perhaps in a shorter form) in Cosmopolitan in 1945. The book came out in 1947 in England, not until 1949 in the US. Like The Snow Goose (and to an extent his first two books of fiction, the Hiram Holliday books) it is a World War II story.

The hero is Lieutenant Jerry Wright, from Connecticut, who is at Gedsborough Air Base in England, flying bombers. He's approaching the end of his stint, but he gets grounded for a couple of weeks due to battle fatigue. Wondering what to do, one of his crewmates suggests he ask a girl to accompany him on a trip to Scotland, for some fun (of exactly the sort you might think). British girls, he is assured, understand the arrangement -- just for fun, no hard feelings when it's over. And Jerry, son of a successful banker, has his life planned -- he'll go home and into his father's business, and he'll marry the neighbor girl, tall and beautiful (but, at least in Jerry's conception, apparently sexless) Catherine Quentin, daughter of his mother's best friend.

Jerry is a bit embarrassed by this suggestion, but ends up deciding to ask a girl he's been friendly with, a WAAF who works at the base, and who thus understands the pressure they're all under. Her name is Patches (from a young mispronunciation of Patrice) and she is presented as a bit shy, not terribly pretty, and (to my mind) not the sort of girl who'd agree to Jerry's proposal (though she does have leave coming). Jerry explains about his engagement to Catherine, making it clear they have no future, and Patches agrees to accompany him on the understood terms.

Well, you see how things are. Patches is already in love with Jerry, and Jerry doesn't really realize it, but he's well on the way to being in love with her. And the trip seals things. The sex is good, true, but the shared experiences, the conversations, etc., are more important. When Patches' leave is over, they say their farewells, Jerry still convinced his future is set. And then he realizes he's made a mistake -- he needs Patches. But what about Catherine? He catches a fortunate ride on a transport one of his friends is flying back to the US, for a whirlwind visit to home. But he can't make himself see Catherine, and when he tells his parents his plan, they act rather horribly. His mother breaks down, and loads him with guilt over (really) the mess he's made of her own dreams. His father tries a more mature approach, admitting to an affair with a French girl during WWI, and assuring Jerry that his feelings for Patches are just infatuation. And he seems to have Jerry convinced.

So what happens when he returns to England, and sees Patches again? Two guesses, and the first one doesn't count! But, really, Gallico handles it all pretty well, and he sells the Jerry/Patches relationship, and Jerry's eventual decision, quite well. This is popular fiction, rather thin, really, and written in workmanlike fashion. And quite sentimental. But it's well done popular fiction, and I conclude, based on this and my memories of the other Gallico novels I've read, that he deserved his popularity.
Posted by Rich Horton at 6:55 PM