I find "old bestsellers" in lots of places, though most often in antique stores and estate sales. And I choose them based mostly on whether or not the specific book seems potentially interesting. So it was with this book, by someone I had never heard of. And when the book is by someone I've not heard of, sometimes the most interesting story is that of the author -- not of the book she wrote. 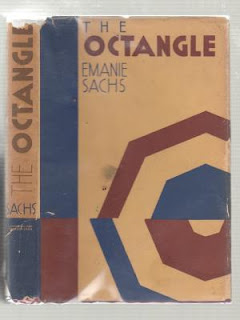 So I think it is with Emanie Sachs. I found The Octangle, her 1930 novel, for $1.50 at an antique store, and it seemed worth a try. This was a writer I had certainly never heard of. When I went looking for more information, I found no Wikipedia entry, but I did find something better: a paper that had been presented at Western Kentucky University in Bowling Green in 2008 entitled Rebel With a Cause: Emanie Nahm Sachs Arling Phillips, by WKU librarian Nancy Disher Baird.

It seems Emanie Nahm was born in 1893 and raised in Bowling Green, hence the university's interest in her. Her father was a rather distinguished lawyer and banker. Her parents disapproved of her tomboyish ways, and also of her desire to be a writer. But after dropping out of college in 1913 she moved to New York and began writing for the Times. In 1917 she married Walter Sachs, of the family that by then owned Goldman Sachs, the investment bank. (Goldman had been forced out due to his pro-German sentiment.) They had one child, but the marriage was unhappy.

Emanie took writing classes at Columbia and was soon publishing short stories. Her first novel, Talk, appeared in 1924, set in a fictional town obviously based on Bowling Green. It sold quite well, according to Baird, and was compared to Sinclair Lewis' Main Street. Red Damask, about a Jewish family in New York, came out two years later and was also successful, earning more comparisons to Lewis and praise from Edna Ferber. In 1928 she published The Terrible Siren, a biography of the suffragist Victoria Woodhull. Her last book was The Octangle, in 1930. Baird calls it "rather insipid", a judgement with which I agree. She also claims that the publisher (Jonathan Cape and Harrison Smith) went bankrupt just about then, killing the novel's distribution. (Indeed, first editions, even without dust jacket, are fairly pricy ($40 or so), making my $1.50 look like a bargain.) (There was a British edition in 1932.)

After this, Emanie's life took some bad turns -- the death of her mother, and illness, messed her up for some time. In 1937 Walter Sachs divorced her to marry an actress. Emanie took the name Arling at this time, and later on, after some apparently unhappy affairs, married August Phillips in 1963. She continued writing, mostly working on a history of Kentucky, but published nothing more. She also painted. She died in 1981.

So -- a fairly interesting and privileged life. And some early literary success. But I would say Emanie Sachs is essentially entirely forgotten today. What then of The Octangle?

To begin with, it's a very slim book, only about 25,000 words long. It is a murder mystery of sorts, though the mystery is not very mysterious, and the real focus of the novel is on the title "Octangle", a group of 8 rather shallow rich New Yorkers. The book opens with one of the eight, Linda Carter (probably the most wonderful woman in the book) being murdered by an unidentified man who was apparently enraged to witness her dallying with her lover. Immediately follows a description of a dinner party given by Horace and Adele Morley, attended by four other members of the Octangle. Two of them are unmarried: Chloe Vincent and Bryan Emmett. The other two are Jeffrey and Muriel Deene. Linda Carter, of course, cannot attend, as she is dead. And Rodney Carter is in no mood to socialize. This chapter and the chapters that follow piece by piece delineate the various characters: Muriel is beautiful but unlikeable and not very interested in sex. Jeffrey is an author (of books about murder!), and he was Linda's lover. Chloe is fairly clever, and an artist, and has sworn off men after a terrible relationship. Bryan is a successful man in finance, with a tendency to go on swooning crushes over women, but not to date them. Horace and Adele are contented and smug. Rodney is a very good looking man, and a sucessful architect, but a bit of a bore, and he married Linda because she wasn't very good looking and she was socially eligible -- after he had fallen in love with a beautiful lower class blonde.

And as for Linda, she was a dull and plain girl from Kentucky who, after she married Rodney and had a couple of children, started to blossom, taking a couple of lovers, and turning to music. And then she was killed, in her music studio right after she had made love with Jeffrey.

Spoilers will follow -- I don't think they are terribly important, but by all means skip this paragraph if you want to read the book and care about spoilers. Suffice it to say that the solution is a bit overprogrammed, and a bit classist, and a bit implausible.


The obvious suspects are Muriel (because of anger at her affair with Jeffrey, and murder by hire -- she was on an ocean liner when the murder happened), Jeffrey (last person to have seen her, perhaps a crime of passion), and Rodney (anger at her affair with Jeffrey). But none of them really seem likely. And then we hear Bryan Emmett's real story -- he was a poor boy from Kentucky, with an abusive father, and a mother he loved until his father beat the virtue out of her. His father was a thief as well, and taught his son how to get away with it. And so Bryan (born with a different name), steals a stake from another man, runs off to Cincinnati and begins to make a name for himself, moves to New York -- where he encounters Linda Terrill, one of the rich Kentucky girls he used to envy in his boyhood. At first he adores her, associsating her with his mother, but when he learns of her affair with Jeffrey, he feels revulsion and anger ... Chloe figures this out (not quite in that detail), and Bryan, in the cynical conclusion, sneers at her and assures her that no one will believe her crazy story. The book assumes that he's right, and that Chloe will say nothing and he'll get away scot-free.
Posted by Rich Horton at 4:41 PM