This book, aimed at children -- very young children -- was not really a bestseller. But I think the writer, and her several books for children, was pretty popular in her day.

One of the joys of finding old books like this is the occasional quite unexpected things you learn about the authors. I bought this book at an antique store in St. Louis on a pure whim a little while ago. I'd not heard of the book nor the author. But when I looked up Maud Lindsay I found that she was really a pretty significant figure around the turn of the 20th Century.


Maud McKnight Lindsay was born in Tuscumbia, Alabama, in 1874, the daughter of a former governor of the state. (Helen Keller was born in Tuscumbia six years later, and the entry on Lindsay in the Alabama Women's Hall of Fame says that she and Keller were childhood playmates and lifelong friends.) Lindsay became a kindergarten teacher, first at a private school, then, in 1898, she opened a free kindergarten in East Florence, Alabama, apparently a poorer area. She ran the kindergarten (which still exists, now named after her) until her death in 1941. Part of her teaching program was telling stories to her students, and so she published a book of stories, Mother Stories, in 1900. Twelve more books followed, a couple of them longer stories, but most collections of quite short pieces, suitable, I suppose, for reading to kindergarteners.

The Story-Teller was published in 1915 by Lothrop, Lee, and Shepard. My edition appears to possibly be a first (fine condition, no dj -- I don't think there ever was one). It is illustrated in color by Florence Liley Young. The front cover in some copies is colored, and mine is not, which may hint that it is not in fact the first edition, or that the color (including, apparently, gold leaf in the lettering) has worn off. Another interesting feature is a few songs, for which musical notation is given, written by Lindsay and set to music by Elsie A. Merriman (or in one case, set to a folk tune). 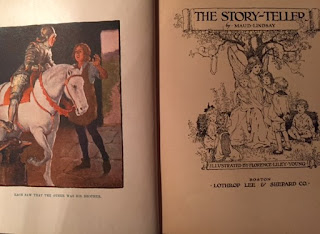 The book contains a dozen stories:

These are all in fairy or folk tale mode, set in the standard cod-European settings of the most familiar (to Western readers of my generation, anyway) such tales. Most seem to be original to Lindsay, but she does credit other sources for a couple of stories: "The Promise" is based on an old poem ("told to me by Miss Harriette Mills"); "The King's Servant" is based on the Brothers Grimm tale "White Snake"; for "The Quest for the Nightingale" she credits Shakespeare, Joseph Rodman Drake, and a couple of old folk tales; and "The Lions in the Way" is based on an incident in John Bunyan's Pilgrim's Progress.

As the lengths of the stories suggest, these are very simple pieces. For any but the very young, I think they are a bit too simple -- there is neither enough incident, nor enough conflict, to really hold the interest. But perhaps they are well pitched for very young children -- for kindergarten age children, and possibly the lengths are appropriate for classroom reading. The writing is clear enough. The stories tend to be very sentimental, and to make quite straightforward moral points. Only in a one or two is there any humor (mostly in "The Great White Bear", in which two foolish characters mistake a sheep for a bear). My favorites were "The Apple Dumpling" in which an old woman wants an apple dumpling but has no apples, and goes out looking for them with some plums, and ends up serially trading the plums for a variety of things before finally getting her apples; "The King's Servant", in which a faithful servant of the King goes to visit his mother and on the way helps out a bird and a fish and some ants, which redounds to his benefit when another evil King detains him; and "The Quest for the Nightingale", in which a fairy allows the Queen's nightingale to be stolen, and must go on a long quest to rescue it.

Obviously at my age I am not the audience for these stories. I'm not sure many children will be any more, however. I think they are really too simple, and they lack sufficient wit, plot, or wonder to really make them memorable. Perhaps in their time they were serviceable, however, for their intended purpose. And, I will say, the book itself is a fairly attractive physical object.