Old Bestseller: The Helmet of Navarre, by Bertha Runkle

Old Bestseller: The Helmet of Navarre, by Bertha Runkle

Back this week to a true Old Bestseller. The Helmet of Navarre was the third bestselling novel of 1901 according to Publishers' Weekly. It was first serialized in the Century magazine in 1900, and The Century Company published the book the following year. 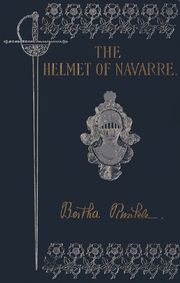 Bertha Runkle was not yet 21 when the Century accepted her novel, and indeed much was made of her youth when the book became a success. She was born in 1879 to Lucia Runkle, an editorial writer for the New York Tribune (and said to be the first woman on the editorial staff of a major metropolitan newspaper). Her father was a lawyer (he represented the Tribune). Her father died when Bertha was only 9. Lucia Runkle, besides her success as a journalist, was well connected in the literary world, serving as an advisor for Harper and Brothers, and collaborating with Charles Dudley Warner (hinself also a collaborator with Mark Twain, co-coiner of the term "The Gilded Age" (with Twain), and originator of the phrase "Everybody talks about the weather but nobody does anything about it" (inevitably often misattributed to Twain)) on the 30 volume Library of the World's Best Literature.

Bertha Runkle eventually wrote 6 novels, though none of the others had quite the success of The Helmet of Navarre. She married Captain Louis Bash in 1904, and lived with him in the Philippines (where he was stationed), San Antonio, and Washington, D.C. She died in 1958.

My copy appears possibly to be a first, though the cover isn't as nice as the image shown above. It does still have the script version of Runkle's name. It is illustrated, nicely enough, by Andre Castaigne, although the reproductions (in black and white) of the illustrations are a bit muddy. 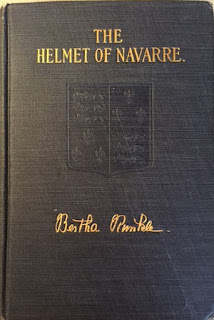 The Helmet of Navarre is an historical novel, set in 1593, in Paris. The Catholic League is in control of Paris, but the rest of France is controlled by the King, Henry IV. Henry was born Catholic but raised as a Protestant by his mother, the Queen of Navarre (it's not clear to me if this Navarre was the French region near Navarre in Spain, or the Spanish Kingdom of Navarre, or if at that time the two Navarres were one). Henry has decided to convert permanently to Catholicism in order to remove that objection to his taking the crown. The Catholic League is not entirely happy about this -- they don't believe Henry is a true Catholic, and anyway they will lose power. All this is historical background I gleaned from Wikipedia -- the book doesn't go into nearly that much detail (though one gathers a lot of the basics from it). 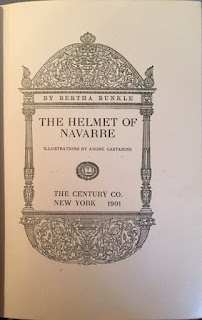 The novel is told, very engagingly, in the voice of Félix Broux, a very young man (16 or 17?) who has come to Paris from provincial St. Quentin to serve his beloved master, the Duc de Saint Quentin. (His father is Master of the Forest for the Duc, and has only now reluctantly allowed Félix to leave the estate.) The Duc is in Paris, supporting the King, which puts his life in danger, because Paris is a Catholic League city. However, when Félix tries to gain the Duc's attention, he is rebuffed, especially by the young man who accompanies him, whom Félix assumes is his once estranged son, the Comte de Mar. Félix finds lodgings, across from a house rumored to be haunted by Huegeonots murdered in the St. Bartholomew's Day Massacre, and indeed in the night he sees three people across the way, who appear to be ghosts.

One thing leads to another, and Félix ends up in the haunted house, where he meets three young men, who turn out to be alive enough. He is almost killed for his pains, but one noble young man spares his life. Félix has learned that this trio has plans to lure the Duc's assistant, Lucas, into the open to fight a duel, over a woman. Lucas seems a coward. Félix agrees to help them, but then he learns from another plotter that in fact the plan is to entice the Duc out to be murdered. Although Félix swore to keep the plotters' plans secret, he cannot allow this to go on, so he forces his way into the Duc's presence and reveals the plan -- which is all the more wrenching because it turns out that the nobleman who had saved Félix' life is in fact the Duc's son, while the rude young man Félix had met in the Duc's company is Lucas.

The upshot is, of course, that the Comte de Mar was innocent of the plot to kill the Duc -- this was hatched by Lucas and by one of the Comte's supposed friends. Félix manages to reconcile the Duc and the Comte, and there is an encounter with Lucas and the other plotter -- one man is killed, but Lucas escapes. We learn the real reason for the estrangement between the Comte and his father is that the son is in love with Lorance de Montluc, the beautiful niece of the Duc de Mayenne, leader of the Catholic League. The rest of the novel, then, involves Mar's desperate attempts to rendezvous with Lorance, and her concern that she will be married off -- perhaps even to Lucas, who is secretly working for Mayenne. Meanwhile the Duc dodges assassination attempts while maneuvering to strengthen King Henry's position. Félix is involved in much of this -- dressing up as a woman (as shown in the illustration here), lurking in secret passages, swordfighting, spying on the slimy Lucas; while Mar vows to be a better man, loyal to the King, but also to marry Mlle. de Montluc despite her family loyalty to the King's enemies.

Of course all works out nicely, over a very brief period of time (the action takes place over just a few days). The Comte gets his lady, Félix is established as a highly trusted retainer, the Duc gains back a son he can be proud of, and of course his efforts for his King bear fruit. The general historical outline is pretty accurate, and indeed Henry did convert (or reconvert) to Catholicism (famously saying "The Crown is worth a Mass"); and he turned out to be a very good King, among other things promulgating the Edict of Nantes, which guaranteed more rights to Protestants (which ended up getting him assassinated by a Catholic fanatic).

This is a very fun historical romp/romance. Of course it is cliché ridden, the action is often implausible, etc. etc. -- all part of the standard expectations for the genre. But it's nicely told, Félix' voice is witty and engaging, the love affair is typical enough but still sweet; the villains (except for Lucas) are plausible and fairly honorable. The descriptions of Paris and Paris life in the late 16th Century ring at least somewhat true to me. I think it deserved its sales, and it seems to me it will still entertain contemporary readers who go in for this sort of thing.
Posted by Rich Horton at 2:18 PM