OK, this wasn't really a bestseller. And it's not -- anymore -- a Forgotten Book, either, though I suppose it was perhaps kind of forgotten for some time. I was put on to it by a brief mention in one of my favorite book blogs, Furrowed Middlebrow; but, as Scott mentions there, it has been recently celebrated in quite a few book blogs, starting perhaps with Stuck in a Book. To the point that I feel in danger of cliche by mentioning it in MY book blog.

Apparently, nobody knows for sure who Diana Tutton was. Wikipedia suggests a woman born with a triple-barreled name: Diana Cicely Godfrey-Faussett-Osborne, whose married name was Tutton. But apparently there's not further information -- there is a plaintive request somewhere for the copyright holder for Guard Your Daughters. Tutton wrote three novels: Guard Your Daughters was the first, in 1953, followed by Mamma in 1955 and The Young Ones in 1959. The latter two seem edgier -- Mamma is about an older woman's affair with her son-in-law, and The Young Ones is about incest. Guard Your Daughters has a serious undertone, mostly towards the end, but it's mostly rather bouncy and eccentric. It is inevitably compared to I Capture the Castle, by Dodie Smith, which I read and enjoyed greatly several years ago, though to me, while the similarities are obvious enough, the overall feel is different. 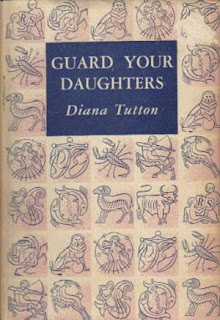 The narrator is Morgan Harvey, a 19 year old girl living in a 17th Century house in rural England. She is the third of five sisters. The eldest, Pandora, has recently married. Next is Thisbe, an aspiring poet. Morgan plays the piano. Cressida is 18, and much more conventional than her sisters: she's the best cook, and the only one overly concerned with propriety and with how everyone else sees them. And Teresa is 15, with no education but what she has learned from wide reading of obscure books such as The Courtier, a 16th Century Italian book by Baldassare Castiglione.

The girls live an almost isolated life. Their father is a very successful mystery writer, and their mother is apparently mentally frail, unable to go out in public, nor to tolerate much company. They are almost never allowed visitors, especially not young men, nor do they travel. But their life is quite happy, it seems, despite some privations caused by a certain care they take with money (despite their father's success) and, perhaps, by wartime or postwar rationing. They tiptoe around their mother's moods, but otherwise quite enjoy themselves, their interests, and their own company. But they do wish they might occasionally meet a young man ... (The obligatory reference to Pride and Prejudice is indeed made.)

So the story is driven, to a small extent, by what happens when they fortuitously encounter a couple of different men: first Gregory, whose car happens to break down in front of the Harvey house; and later Patrick, a writer, who shows some interest in Mr. Harvey ... which ends up being a problem. Morgan seems to take a proprietary interest in Gregory, and eventually Thisbe in Patrick -- but Mr. Harvey takes against both, for different reasons, and Mrs. Harvey is upset by almost anyone's presence.

So it seems perhaps to be a story about how the Harvey girls find husbands -- Pride and Prejudice, indeed! But that doesn't really eventuate. The center of the story is the Harvey family. There is an ongoing thread of interest, for the reader, in finding out what's really wrong with Mrs. Harvey. And there is constant delight in the interactions of the girls: in their witty exchanges, in their delight in their constricted life, in their evident love for each other. There is also a darker side: they really are unfairly hemmed in by their parents' rules; and they can also be a bit mean, a bit petty, particularly to Cressida, but also to some of their neighbors.

The story bounces along quite enjoyably. Morgan's voice is refreshing and open; there are any number of silly and funny incidents: Teresa's aborted French lesson; Morgan and Thisbe at Patrick's posh cousins' party; improvised poetry sessions; improvised dinners for guests. The resolution, however, is a bit darker: provoked by a family crisis that drives Mrs. Harvey over the edge, and for a time the story threatens to curdle. The upshot is not a tragedy, though, but a perhaps long overdue realization that the Harvey situation is not healthy, and that for the sake of not just the girls but the parents radical changes need to be made. The outcome is a bit bittersweet, but sensible.

This is, finally, a very fun novel, leavened by some real honesty, and by an understanding that the frothy exterior present for the first 2/3 or so of the book is not sustainable: indeed, artificial. We don't really know how things will turn out in the long term for the Harvey's, though probably mostly OK. (And, after all, their problems are decidedly "first world problems".) It is, really, a book that I think deserves its recent bump in reputation.
Posted by Rich Horton at 8:03 PM