This time I’m looking at another obscure collection of Science Fiction stories. This book, as its title makes abundantly clear, was aimed at young readers. It is one of two collections of stories, and several novels, that Richard M. Elam, Jr., published in the 1950s and 1960s. He had a long life: born in 1920 in Richmond, VA, died in 2013, age 92, in Dallas, TX; was educated at William and Mary University and at Arizona State; and served in the Army Air Corp in the Second World War. 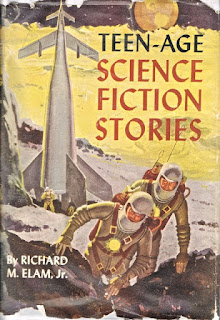 Teen-Age Science Fiction Stories was first published in 1952 by the Lantern Press, and reissued in 1954 by Grosset & Dunlap as part of The Teen-Age Library. There were later editions, possibly in paperback, from Lantern Press. There are a number of black and white illustrations by Charles H. Geer. The book contains an introduction by Captain Burr Lawson, “Trail to the Stars”, which discusses the near term prospects of space exploration, reasonably sensibly though with just a bit too much optimism (I can say with hindsight). The stories are:

At least one of the stories (“Lunar Trap”) and I suspect a few more, were originally published in Boy’s Life.

Six stories in the middle, from “Lunar Trap” through “Sol’s Little Brother”, cover much of the career of Rob Allison. In the first story, he is part of an expedition to the Moon, despite the objections of the expedition’s leader, his much older brother Grant. The elder Allison is pretty hard on the younger one, and partly as punishment, Rob is left behind when the bulk of the expedition investigates a Lunar geyser … giving him the opportunity for heroism when a moonquake traps the explorers. A similar template applies to some of the other stories: Rob, making his way in the space service, is in trouble after a minor mistake, and partly as a result is in position for a more major heroic act. The Allison stories form a sort of Solar System mini-travelogue, with trips to the Moon, Mars, an artificial satellite, Venus, Jupiter, and Mercury. The scientific details are a mix of OK for their time (things like dinosaurs on Venus – silly now, but perhaps not ridiculous in 1952) and downright silly and wrong. There’s a subplot in a couple of the stories involving a slightly older and very resentful fellow space cadet.

The other stories are something of a piece. “What Time is It?” involves a couple of very young boys (they seemed perhaps 12 but maybe Elam meant for them to be in high school) accidentally going on a trip in a local inventor’s Time Machine: they visit the Pleistocene, the near past with Native Americans, and the near future before returning. “The Strange Men” is about three boys who happen across an alien spaceship and some malevolent aliens. “Project Ocean Floor” is one of the lesser stories, a kind of nothing piece about exploring the depths in a bathyscaphe-like vessel. “The Day the Flag Fell” is set on an asteroid used unconvincingly as a monitor station to keep the world peace, and an effort by a nasty national power to destroy the UN station on the asteroid and so take over the world, foiled by the heroism of a young soldier who has been suspected of treason (because his stepfather is a traitor.) And finally “Hands Across the Deep” concerns a mission to Proxima Centauri, where humans discover peaceful advanced aliens with mind powers but little tech, who threaten to kill them until they can cure a sick young Proxima native.

This is a pretty weak set of stories overall, even in the context of early 50s Juvenile SF. The science is dodgy, the plots are at best rudimentary, the writing is uninspiring. Not good at all, though who knows, maybe I’d have felt differently if I encountered them at age 10.
Posted by Rich Horton at 9:18 PM