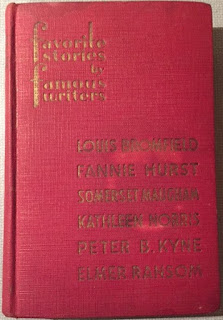 Here's another old anthology, for "Anthology Month" here at Strange at Ecbatan, leading up to special anthology week at Patti Abbott's Friday's Forgotten Books on September 30. This time it's Favorite Stories by Famous Writers, which is actually a collection of stories from Cosmopolitan. In this sense it is arguably a stealth "Best of Cosmopolitan" book, analogous to the the collections that used to be common from SF magazines: the Galaxy Readers, the Analog books, the numerous Best of Fantasy and Science Fiction, nth series books. This book is a bit unique, perhaps, in being not for sale, but only offered with a subscription to the magazine. It was published in 1932, though my copy is from the second edition (1933).

No editor is explicitly credited, though the introduction is by Harry Payne Brennan, editor of Cosmopolitan, which certainly suggests he should get the credit. The introduction notes that these are six stories published in the previous year (presumably 1931) in Cosmopolitan, that represent "an epitome of the magazine". Five writers are well-known and Cosmopolitan regulars, and one is fairly new. I knew of four of the writers, to one degree or another: Louis Bromfield, Fannie Hurst, W. Somerset Maugham, and Kathleen Norris. (Of these, it seems to me that Maugham is the only one to truly retain a reputation and a reasonable readership, though I suppose some might plump for Bromfield.) The other Cosmo regular must have been Peter Kyne, and the newcomer must be Elmer Ransom.

Louis Bromfield (1896-1956) was born in Mansfield, OH. He studied agriculture at Cornell and journalism at Columbia, and served with distinction in the First World War. He became a journalist in New York, and published his first novel in 1924. His third novel, Early Autumn, won the Pulitzer Prize. He spent most of his writing years in France, where he was friends with the (very different) likes of Edith Wharton and Gertrude Stein. He returned to Ohio as World War II impended, and turned to agriculture (and nonfiction about agriculture). At his experimental farm, Malabar Farm, he did pioneering work in organic farming. Malabar Farm is now an Ohio State Park, and still used for developing agricultural methods. All in all, a pretty significant life. Still, it seems to me his fiction is not much read any more, though I have heard of Early Autumn.

"The Girl Who Knew Everybody" seems a bit in the Edith Wharton mode, though to say so only points out that Bromfield was but a pale imitator. It's about a girl from Indiana, with a certain amount of money, who lives in all the hotels in Europe where the best people go. She's in her late 20s, and about all she does is give parties and go to parties, and she's liked because she's sociable -- and because she has enough money to give parties. And she's not ready to marry, and perhaps getting a little old ... then she meets a young man who falls for her, but ... Well, the arc of the sad story is clear from that point. It's not bad, really, and skillfully done, but it does seem the sort of thing I've read before.

Fannie Hurst (1885-1968) was a tremendously popular writer in her time. Her novel Back Street (1931) is the only one that made Publishers' Weekly's list of bestselling novels of the year, but many other books sold well, and she also wrote many many short stories, which were also very popular. These days her most famous book might be Imitation of Life, because of the Lana Turner movie. (Actually, some 30 movies have been made from Hurst's stories.) She was born in St. Louis, and went to Washington University. She was known in her time for tackling significant social issues, though, to our eyes maybe a bit clumsily. In this she resembled, perhaps, Ellen Glasgow and Kathleen Norris, two other very popular woman writers -- and two other writers sometimes dismissed as "just for women". Jennifer Weiner might have been interested in reading her reviews! Hurst was also notorious for her rather open marriage, in which she and her husband maintained separate residences -- this was called at the time a "Fannie Hurst marriage".

"God Made Little Apples" is a story about marriage -- it opens with Crecelius (Cornelia Crecelius Macalroy), wife of a successful doctor, contemplating her plans to run away to Paris with her younger lover, and to divorce her husband. It's not that she dislikes her (older) husband -- and she's confident he depends absolutely on her to arrange his life. But there's no passion in their marriage! And so ... But then, in the twist conclusion, we see Dr. Macalroy and his young assistant and their plans ... I thought it a somewhat formulaic little piece, though not badly executed.

W. Somerset Maugham (1874-1965) is easily the most famous of these "famous writers". His best known novels are The Razor's Edge and Of Human Bondage, along with perhaps The Moon and Sixpence; for all that, his short stories are perhaps more highly regarded. He had a varied life: born in France* into a family of lawyers (with a brother who was for a brief time Lord Chancellor), he trained instead to be a doctor, but after the success of his first novel stuck with writing, except during the first World War, in which he was an ambulance driver and later an apparently quite effective intelligence agent. (He claimed he could have "saved Russia" had he got there 6 months earlier. Perhaps an interesting alternate history subject?) A gay man, he seems to have been a bit conflicted about that, and he married once, and had a daughter (leading, towards the end of his life, to a notorious and rather unpleasant legal battle when he tried to disinherit her in favor of his latest lover, claiming she was not his daughter -- he lost the case).

(*Indeed, French was his first language, so he joins the likes of Nabokov, Conrad, and Stoppard as major English writers of the past century who first spoke another language.)

His literary reputation was generally more or less in line with his own estimation: "in the first row of the second raters". His greatest weakness is judged to be his prose, it seems to me. I have myself only read a couple of shorter novels (Cakes and Ale and Up at the Villa) along with a few stories, plus the collection of spy stories, Ashenden. I've enjoyed them all, without ever deciding to take a particularly close look at his other work. "The Right Thing is the Kind Thing" is set in Malaysia. George Moon, a successful but not terribly well-liked colonial official, is retiring. Just before the final dinner in his honor, he receives a visit from Tom Saffary, who organized the dinner but otherwise has been cool to Moon, due to a judgement Moon made against him. But Saffary has another subject to discuss: the death of his close friend, but more importantly, the realization that his wife had been his friend's lover, and was ready to leave him. Saffary wants Moon's advice: should he divorce his wife? The story -- and Moon's own story -- is revealed with much skill, and a fair amount of believable characterization. The prose may be undistinguished, but the structure and burden of the story are nicely done. There may be a touch of patness to the setup, and to the back story, but all in all it's pretty effective.

Like Hurst, and to an extent like Maugham, Kathleen Norris (1880-1966) was an extremely popular writer who was not treated overly kindly by the critics. She has been called the bestselling American woman writer of the 20th Century (a claim I doubt, given the likes of Mary Roberts Rinehart). Also like Hurst, and like similarly popular woman writers such as Ellen Glasgow, she often dealt with social issues. I found the one novel of hers I read enjoyable enough, if clearly not great work.

"Men Are So Dumb" is a straightforward love story. Phyllis Richie is somewhat straight-laced young woman, from a good family, with a decent job, and with no prospects of marriage, at age 26. Her younger co-worker is always going on dates, and though she doesn't approve of her behavior she starts to wonder if she is too stiff ... So she decides to place a personal ad. And, in a somewhat roundabout way, it actually works. It's not a bad story, though not a particularly special or surprising one either.

Peter B. Kyne (1880-1957) was a San Francisco writer, son of a rancher, who wrote mostly about the American West. He was very popular in the first half of the 20th Century, and had many of his stories turned into movies. His novel Kindred of the Dust was the second-bestelling novel of 1920. And by now he seems essentially forgotten. Perhaps his Cappy Ricks stories (and the films made from them) are slightly remembered. But surely, of the 5 "famous writers" in this book, while he certainly qualified in 1932, he's the least remembered now.

"With the Help of Ho Lung" is a Western story. It's told by an old rancher named Dad Tully, about a young man named Johnny McIntosh who hanged a man, and got away with it, with the help of his long time servant Ho Lung, who had raised him like a son after his mother died in childbirth. Johnny grows up, a good student, well-versed in Chinese lore as well as Western lore, and he takes over his father's ranch when his father dies. He falls for a girl in the city, but for one reason or another she marries someone else, a no-good lazy man. And Johnny gives him a job when he needs one, and the man repays him by helping a team of rustlers steal his cattle. So you see where this is going ... It's told in a somewhat annoying rural dialect, peppered with cliche Confucianisms and other Chinese sayings from Ho Lung. The story itself is OK, but I found the whole presentation a bit irritating.

Finally, the writer that I assume Harry Payne Brennan, in his introduction, called "not widely known", is Elmer Ransom. Ransom is still very little known. He seems to have published two collections of short stories: Fishing's Just Luck and The Last Trumpeters; as well as a slim nonfiction book, sketches and descriptions of some birds and animals: The Woodland Book. (He did have one story in the seminal fantasy magazine Unknown Worlds, "The Golden Age" (1942).) I can find very little about him on the web, though one source suggests he was born in 1892 and died in 1942. He was from the South, it seems, and his subjects were hunting, fishing, and life in the wilderness.

"Rack, Son of Ezekiel" is about a big raccoon that the main human character in the story calls "Rack", son of a legendary big raccoon called Ezekiel. It's the story of his battles, over some years, with a wild stray dog called Lupus. It's told mostly from Rack's point of view, though also through the eyes of David Carson, an outdoorsman who loves the same swampland Rack lives in. It's decent enough work, in a mode I don't really take much interest in. It could be accused on anthroporphizing Rack, and I suppose it does, but clearly with the acknowledgement that that's whats going on, that that's just a way to tell Rack's story to humans.

In summary, this is, I think, a fairly representative sampling of mainstream popular short fiction of its era. The stories are mostly decent, though none is a masterwork. I can believe that this fairly represents the best stories from Cosmopolitan in 1931 or so, and as such it doesn't disgrace the magazine.
Posted by Rich Horton at 6:25 PM