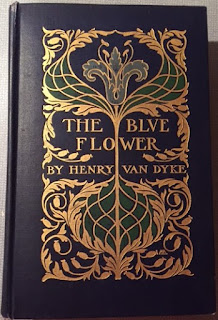 This book is a collection of short stories, so it fits nicely enough into this month's anthology theme. And it was the 9th best selling work of fiction on Publishers' Weekly's list for 1902, so it fits this blog's main theme pretty well too.

(It shouldn't, of course, be confused with the much more recent novel The Blue Flower, by the incomparable Penelope Fitzgerald, one of my favorite late 20th Century British novelists; though in each case the title refers to the symbol central to the works of the German Romantic writer Novalis.)

Henry van Dyke (1852-1933) was a Presbyterian minister, and also a Professor of English Literature at his alma mater, Princeton. He was also a friend of Helen Keller, and of Woodrow Wilson (a classmate at Princeton), and served as Ambassador to the Netherlands and Luxembourg during World War I. As a writer, he was noted in particular for his poetry (including the lyrics to "Joyful, Joyful, We Adore Thee", a well-known hymn set to the "Ode to Joy" from Beethoven's Ninth Symphony) and for his short stories. I'm not sure he ever wrote a novel.

The stories in The Blue Flower are:

Most of the stories (though not all) are on distinctly Christian themes. And, I must add, pretty effectively so -- these are good stories, well-written, sometimes quite original, quite affecting. This is a book that deserved its bestseller status.

While I'm at it, I'll mention the specifics of the particular book I have. It's the 11th printing, from 1909, of the 1902 original. Interestingly, it's not a Harper's book, instead it's from Charles Scribner's Sons. It is copiously illustrated, by several artists: J. R. Weguelin, F. V. DuMond, Arthur Heming, Howard Pyle, and C K. Linson. And the first leaf is signed, in pencil, presumably by the first owners: "from #2 Mission, 12/25/09, Harriett Craven, Lucy Bremer, Wm. Stickwell, Wm. Turner, David Williams." Followed by an addition, in ink: "Oh days of 1909, and priceless are the memories of those days in the service of our blessed Lord. WCM[?]8/28/42". Fascinating to see these inscriptions!

To the stories: "The Blue Flower" is a brief story, based on Novalis' idea of the Blue Flower as a symbol of human aspiration for union with nature. In this piece a boy dreams of a journey through a forest to a pool and eventually to the sight of a blue flower. And that's about it.

"The Source" is much more interesting, told by a traveler, a seeker of the Blue Flower, who comes to a depressing city, once beautiful but now declining. He learns its story: when the city's people visit a certain spring, the Source of its nurturing river, and worship there, the river flows abundantly and people are happy, but when people begin to credit their own efforts for the water, things go poorly. He meets a young woman named Ruamie, who alone among the locals credits the Source for their water, and over a short time the two begin to reinvigorate the city's habit of worship. But the narrator must leave, for his proper quest is the Blue Flower, while Ruamie stays, for her proper home is in her city. A later return reveals that while Ruamie still worships, the rest of the city has forgotten again. The message is pretty clear, but the story avoids didacticism, and achieves a certain sweetness and clarity.

"The Mill" is a different sort of story. It's about young Martimor, who encounters Sir Lancelot, and decides that he too wants to be a noble Knight and go on a Quest. After learning the ways of knighthood from Lancelot, Martimor sets out on his Quest and stops at a mill, somewhat bothered that he can find no great deeds to commit, for "the world is full of meat and sleepy". He ends up staying at the mill for some time, continually extended, as he rescues the miller's daughter's dog, then strives with the "foul churls", Ignis, Ventus, and Flumen (fire, wind, and water) that menace the mill. Over time he vanquishes Ignis and Ventus and tames Flumen, and wins the love of the miller's daughter, and comes to realize that this has been his proper quest: in essence, to work ably as a miller, and to love a common Maid, and that that is a knighthood as true as that of any Prince fighting wars and winning the hand of a Princess. Again, I thought this a pretty good story, told in an exaggerated prose style, mimicking the high romantic style -- forsoothery, if you will -- that works quite well because the author knows it's all for fun, in essence.

"Spy Rock" is again framed by the narrator's search for the Blue Flower. In his wanderings, this time in New York state, he comes upon the Hilltop School, after meeting the perhaps cynical but intelligent Edward Keene, one of its teachers. He stays at the school for a while, learning more about Edward Keene, and the School's Master, and the other teacher, John Graham, and the Master's daughter, Dorothy. It becomes clear that John Graham and Edward Keene both are in love with Dorothy, and that Dorothy seems to prefer Edward Keene, the more brilliant but less stable of the two men. But Keene doesn't seem to treat Dorothy well, going off on lonely walks without her, seeming to increasingly lose his temper. John Graham is ready to fight him, but the narrator urges an attempt to understand Keene, and Keene finally invites him on his walks, where he takes him to the summit of Spy Rock, where, he thinks, he can see the whole world, and see into the false hearts of men. All this seems kind of interesting, but the resolution falls a bit flat, as it is revealed that Keene's visions are caused by his addiction to a drug (apparently hashish), which eventually kills him.

"Wood-Magic" is another story in pure fable mode. A young man, Luke Dubois, lives in a secluded place in the woods, and he understands the true magic of nature. But he decides he needs to make something of himself, and he takes his boat to the city, and gets a job working for a storekeeper, and does well, to the point his boss offers him a share in the business and the hand of his daughter. But Luke, in something like a dream, wanders back to the river, finds his boat, and returns to the woods ... yet, we find out, that was one half of him, for he returns, and years have passed, and "Luke Woods" is now the sole proprietor of the business, married with children ... There's no real moral here, no argument that Luke Dubois or Luke Woods has taken a better path, just a picture of two parallel lives, it seems.

"The Other Wise Man" comes next. It's about a Persian man of science, who has seen the star in the sky that heralds the coming of a great King. He has arranged to join three other wise men on a journey to Jerusalem to honor the King, but on the way to the rendezvous he meets a dying man, and stops to give him care, eventually surrendering one of the three jewels he planned to give the King to help. Another jewel finances his now solo journey, but by the time he gets to Bethlehem he learns that Mary and Joseph and Jesus have fled to Egypt. He saves one child from Herod's massacre of the innocents, then goes to Egypt, and continues his wandering, helping the poor and sick wherever he goes, but somehow never quite finding Jesus. Finally, 30 some years later, he comes to Jerusalem, having heard that a great teacher has come, and then he hears that this man will be crucified. Perhaps, he thinks, his last jewel can be ransomed to save Jesus' life -- but instead he meets a young woman about to be sold into slavery, and surrenders the jewel to pay her debts instead. And as he does so, there is an earthquake -- the tremor that happened at the moment of Jesus' death -- and a falling piece of stone injures him unto death. As he is dying, he laments never having found the great King for whom he had searched: but then Jesus' voice comes to him, and tells him that he found him indeed, every time he succored one of the least of his brethren, he was helping Jesus. I admit I could guess the plot of this story from the start, but I think it works, it's quite affecting.

"A Handful of Clay" is a fairly inconsequential story, again in fable mode, about a bit of clay and its disappointment at being formed into merely a crude flower pot -- but then its redemption when the flowers turn out to be Easter lilies. Pretty minor stuff.

The last two stories directly concern early Christian history. "The Lost Word" is set in 387 A. D., in Antioch, early in the career of St. John Chrysostom. The story concerns Hermas, a young man who has become one of John Chrysostom's converts, in the process being disowned by his rich, pagan, father. But Hermas becomes disillusioned, and ends up trading one word (the name of Jesus) to a sorceror of sorts (interestingly named Marcion, though I don't think any connection with the much earlier, somewhat Gnostic, Marcion of Sinope is intended). Hermas reconciles with his father on the latter's deathbed, and becomes very wealthy indeed, marries a lovely young woman, and has a fine son, only to be tested again when the son becomes terribly ill. In the end, the story doesn't really convince.

And "The First Christmas Tree" is set in Germany in 722 A. D. It retells a fairly familiar story from the life of St. Boniface, the British missionary to the Germanic tribes. Boniface accepts a young man, a prince, into his company, as he plans a mission to the pagan tribes in Saxony. They travel into the woods, and encounter a group of pagans worshipping around a great oak tree. Boniface challenges the pagans, and ends up taking an axe to the oak tree -- and then, in what seems a miracle, a great wind comes up and blows the tree to bits. Again, this is a fairly minor piece, not really too convincing.

In the end, as I said, I liked the book, especially for "The Other Wise Men", "The Source", and "The Mill", with "Wood-Magic" and "Spy Rock" also fairly enjoyable, and each story at the least quite well written.