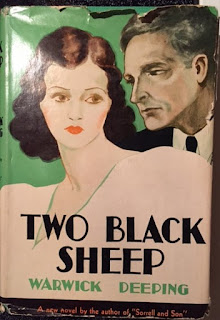 I knew, when I started to write about old bestsellers from the early 20th Century, that sooner or later I would cover a Warwick Deeping book, but I have to confess that I could never get interested in the copies I saw of his most famous novel, Sorrell and Son (1925), even though it’s marginally Science Fiction. So I waited until I came across another novel – Two Black Sheep, from 1933. My edition is from Grosset and Dunlap. There is a curious note on the dust jacket: "The issuance of this new edition at a reduced price is made possible by a) use of the same plates made for the original edition, and b) the author's acceptance of a reduced royalty". The "reduced price" was 75 cents! As noted, the dust jacket, and the binding, indicate Grosset and Dunlap. However, the reuse of plates from the original edition extends to an internal designation as "A Borzoi Book, Alfred E. Knopf", and the copyright page says "Published September 8, 1933. First two printings before publication. Third Printing, September 1933.", which must also be from a Knopf printing. This does suggest it sold fairly well. The G&D edition must have been not too much later, as the back page listing of other Deeping novels shows none later than Two Black Sheep.

The first UK edition was from Cassell’s, earlier in 1933, and the novel was serialized (as “Black Sheep, Black Sheep”) between September 1932 and February 1933 in the Hearst magazine International-Cosmopolitan. There was apparently a movie version, called Two Sinners.

Warwick Deeping (1877-1950) was an English writer, originally a Doctor (apparently following in the footsteps of his father). He began publishing novels in 1903, but continued in his practice for some time. He served in the Royal Medical Corps in the First World War. Not long after that he stopped practicing medicine to concentrate on fiction.

He was very prolific, publishing some 70 novels and over 200 short stories. From the mid-‘20s to the ‘30s  he was remarkably successful, with a novel on the Publishers’ Weekly list of the 10 bestselling novels of the year for 7 consecutive years between 1926 and 1932. (So that it seems that Two Black Sheep may have been the one to break the streak!) The first of these huge bestsellers was Sorrell and Son, third on the list in 1926 and again fourth in 1927 (in which year his Doomsday was third). His literary reputation was never very high – he was disparaged for his melodramatic plots, his somewhat platitudinous beliefs, his sometimes strained views of sex and indeed of women, and, as George Orwell wrote, as one of those writers who simply “don’t notice what is happening”. That said, his novels were interested in significant and controversial social issues: the Wikipedia entry lists themes such as rape, euthanasia, women posing as men to achieve equal rights, slum conditions, pollution, and a wife justifiably killing her husband because of abuse.

I found a really delightful blog about Deeping, My Warwick Deeping Collection (warwickdeeping.blogspot.com). The writer became obsessed with collecting Deeping just a few years ago, and has copies of each of his books, and some of the periodical versions as well. He includes a brief description of each book, with some useful details on publication history as well, including sometimes serial versions, and also picture of multiple editions. Just my thing! With the blog owner's permission, I've reproduced a couple of those images here, one the original Cassell edition dust jacket, and the other the cover of the Sunday Ledger reprint. 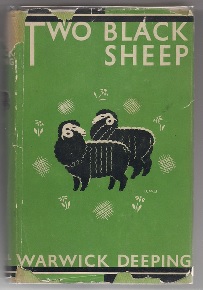 Two Black Sheep opens in about 1915 as Captain Henry Vane, on leave from the front, visits a certain Mr. Belgrave, pulls a gun on him, and shoots him. Vane turns himself in immediately, and is sent to prison for 15 years. It seems that Mr. Belgrave had been fooling around with Mrs. Vane while Captain Vane was fighting in France, and got Mrs. Vane pregnant. 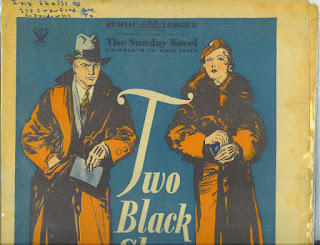 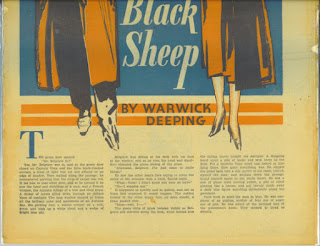 Now in 1930, Henry Vane has been released from prison. He’s an engineer, but has no job prospects due to his record. Luckily, he’s quite well off, and he decides to travel, figuring his case will be unknown outside of England. He ends up in Rome. Meantime, Elsie Summerhays, a woman in her late 20s, and her mother have been impoverished after the death of Mr. Summerhays (a writer) revealed a mountain of debts. Elsie decides she must take a position, and is hired as a governess by a spoiled and vulgar young widow, Mrs. Pym. Mrs. Pym and a friend are planning to spend some months in Europe, and she needs a woman to look after her daughter while she fools around with whatever men she fancies. So, Elsie too ends up in Rome, in the Pym entourage, dealing with young Sally Pym, a terribly spoiled little girl. As it happens, her room is next to Henry Vane’s, and they meet while relaxing on neighboring balconies.

Over the next couple of months, Elsie and Vane begin to fall in love. And Elsie, after much difficulty, seems to be making progress in taming Sally Pym. But a couple of disasters happen – first, Vane confesses his criminal history to Elsie, and she reacts in shock. Before she has a chance to reconsider and to talk again to Vane, Mrs. Pym, embarrassed both financially and romantically, runs off to the Riviera. And Elsie learns that her mother is dying. She asks Mrs. Pym for her salary, which that nasty woman refuses her, claiming she has no money on hand. When Elsie finds a bunch of cash that Mrs. Pym was saving for the casino, she takes enough for a ticket home (way less than she is owed), and is arrested, and thrown into jail – Vane having tracked her down just a day or so too late!

The rest of the novel is a depiction of Vane building a home for the two in the South of France while waiting for Elsie to serve her time – and it never surprised from that time forward, despite a couple of manufactured crises (a local woman has her eye on Vane, and Elsie falls sick in prison). I found the ending, thus, a bit lacking in tension, a bit overextended. I was also disappointed never to learn what became of Mrs. Pym (one hoped for a comeuppance for her), nor of Sally (one hoped for redemption for her) … but to be fair to Deeping, this aspect was fairly realistic and avoided convenient clichés, such as Sally ending up a happy adopted child in the Vane family.

All in all this was a reasonably entertaining piece of popular fiction of its time – somewhat melodramatic, somewhat sentimental, a plot based on coincidence, yes, all that, but still enjoyable enough. The depiction of Elsie and Vane’s romance is noticeably sexless, but rather nicely depicted in their conversations. Not a very good novel, and in this case not even really interested in any of the social issues that Deeping sometimes tackled – which isn’t necessarily a bad thing, mind you! One of those cases where it’s easy to see why a writer sold well in his day, and easy to see why he’s decidedly a niche interest now – though, I think, less forgotten than many of his contemporaries.