A Little-Known recent novel: The Language Nobody Speaks, by Eugene Mirabelli

A little-known recent novel: The Language Nobody Speaks, by Eugene Mirabelli

OK, this wasn't a bestseller -- not even close. And it's not all that old. It might be sort of forgotten, alas. The real reason I'm covering it is, well, that I like Eugene Mirabelli (and his work), and that I hadn't finished my latest "Old Bestseller" (a novel by Gaston Leroux that I'm find hard going) and that I just finished my latest Ace Double (a Gordon Dickson pairing). 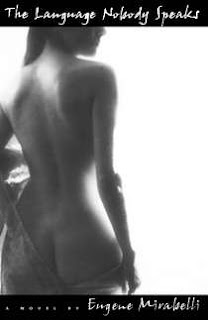 Eugene Mirabelli has written a number of mainstream novels ... the first of them dating all the way back to the my year of birth, 1959. (Indeed, he was born in Massachusetts in 1931 -- as was my father!) He came to my attention with a number of quite lovely SF/Fantasy stories, in F&SF, Asimov's, and Not One of Us. I used a couple of them in my Best of the Year books, and we've reprinted another at Lightspeed. I figured I ought to try one of his novels, and I picked The Language Nobody Speaks, which dates to 1999. I supposed I must admit that I was partly convinced to choose this one by the cover photograph, of a very beautiful and not very clothed woman.

The story is set in about 1956 for the most part. The narrator is Bart, a young mathematician. His car breaks down in Albany, NY, and he happens to run into Erin, a girl he had met and become very attracted to at a wedding a year or so before. She has a little time, so she agrees to have lunch with him. At lunch they happen to sit with a somewhat older married couple, Hollis and Lida, who seem quite taken with them. The older couple (not really that much older -- Bart and Erin are presumably in their mid- to late-20s, and Hollis and Lida in their 30s or perhaps early 40s in Hollis's case) convince the younger pair to accompany them on a brief excursion to Saratoga. Bart and Erin quickly realize they are falling in love, and they end up staying the night at a hotel in Saratoga, with Hollis and Lida in the neighboring room.

By various happenstances, the stay is extended a bit. Bart and Erin sleep together, talk a lot, about things like Bart's disenchantment with mathematics, and about how people can really know each other, and so on. They also witness by accident some of Hollis and Lida's sex life, which seems to have an S&M element. But though they are disturbed by this, they enjoy the older couple's company in the days, as they visit various New York locations. Inevitably, they are drawn closer and closer to Hollis and Lida, eventually visiting their home in the Berkshires, where certain variously ominous events occur -- some sleeping around, of course, and revelations about Lida's past (she was a Czech refugee who ended up in Italy at the end of the War, where her mother apparently became a collaborator, and where Hollis met her), and further revelations about Hollis's habits, and about their marriage, which is not nearly as strong as had first appeared. The question is, can Bart and Erin's relationship survive all this, even prosper, or will it founder on all this stress. Or will something more sinister happen?

Mirabelli's other novels seem worth a look as well. He often writes on Italian or Italian-American subjects, and occasionally ventures into fantastical territory. He's still writing, and a new novel is due sometime this year.
Posted by Rich Horton at 6:52 PM