Not a Bestseller, once perhaps forgotten: Party Going, by Henry Green 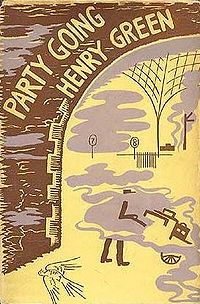 This novel was not, I think, a bestseller, but the writer, Henry Green, did apparently have one novel that brushed the bestseller list in the US, Loving, from 1945. Party Going, his third novel, was published in 1939. It and Loving are generally considered his best.

Henry Green was a pseudonym for Henry Vincent Yorke (1905-1972), the son of a wealthy industrialist in the North of England, and the grandson (via his mother) of a Baron. Yorke was a near exact contemporary of Anthony Powell, and the two were friends at Eton and Oxford. Yorke was also close to Evelyn Waugh (whom he knew at Oxford), and knew others of that notable generation at Eton, such as Cyril Connolly and another man who became much more famous under his pseudonym, Eric Blair. Little celebrated there or at Oxford, he became the first to publish a novel (Blindness, in 1926). He left Oxford without a degree and took at position at his father’s firm, which made machines for making beer bottles, among other things. (Yorke used to claim they made toilets, which as some wag pointed out made for a rather unusual case of vertical integration along with the beer bottles.)

His life story, on the whole, is rather sad, or so it seems to me, though on the other hand perhaps it’s unfair to project my notions of it on him. He married his second cousin (a grandchild of the same Baron), Adelaide Biddulph, called “Dig”. They had one son, Sebastian. Yorke had countless affairs, not always happy (one woman, referring to his habit of giving his novels gerunds for titles, said “Your next novel should be called Hurting.”) He was a heavy drinker, and eventually lost his position in the firm when he was discovered to be drinking pure gin at a meeting, passing it off as water. His last novel was published in 1952, and in the ensuing two decades he published almost nothing, apparently starting and abandoning at least a play and a memoir of his time on the Auxiliary Fire Service during the War. One assumes his inability to write was tied to his alcoholism, but, again, who knows? He spent the last seven years of his life as a recluse, essentially never leaving his home. 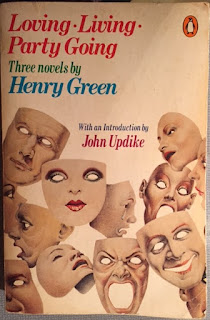 Despite the apparent modest success of Loving (likely his most accessible book), his novels do not seem to have sold well on the whole, and  according to Wikipedia, at any rate, they soon fell out of print. However, as Roger Allen suggests in the comments, there is reason to doubt the assertion in Wikipedia -- I have just bought a 1967 reprint of his last novel, Doting; and I know of a 1964 reprint of Concluding. I would suggest that he more likely remained generally in print (at least in the UK), but that sales were glacial.

He was generally treated well by critics when active, and after he ceased writing his books, almost forgotten by the wider public, seems to have achieved almost cult status among their aficionados, mostly other writers. Terry Southern, who conducted a 1958 Paris Review interview with “Green”, famously called him not a “writers’ writer, but a writers’ writer’s writer”. Other admirers included old friends like Powell, and younger writers or critics such as Sebastian Faulks, Brooke Allen, and John Updike. There was almost a sense, for a while, that to discover Green was to join an exclusive society. However a variety of attempts with varying degrees of success have been made to revive general interest in him, including several versions of an omnibus edition of his three perhaps best known novels, Loving, Living, and Party Going. (I have one of those editions, the 1978 Penguin trade paperback (with an introduction by Updike), and the combined title always brings forth an earworm of Led Zeppelin’s “Livin’ Lovin’ Maid – specifically the lyric “Livin’, Lovin’, she’s just a woman” – but don’t mind me!) Perhaps the Dalkey Archive editions (around the turn of the millennium) were most successful, and while I’m not sure how much of Green’s work is in print now, his novels do appear fairly readily available, and I'd say that he has attained an established place in the canon of 20th Century British writers.

Green wrote nine novels in all, a few short stories, and a well-regarded memoir, Pack My Bag, published just before the War (as he was convinced he might die). His prose is highly individual, evolving from the curious decision to all but abandon articles in his first mature novel, Living, through the flowing, almost careless-seeming, constant POV-shifting of Party Going, to his last two novels, Nothing and Doting, written almost entirely in dialogue. He was known in his life as an aristocrat (of sorts) with considerable sympathy for the working class, who wrote two novels (Living and Loving) largely centered on working class characters (factory workers in the first case, servants in the second) – but many of his novels (including Party Going) were more closely centered around upper class characters.

Well, that’s a lot about the author. What about the book? Party Going is a striking and involving novel, with essentially no plot. It’s about a group of wealthy young English people, sometime in the ‘30s, ready to take a train to a house party in the South of France. The novel takes place during a few hours as the party waits, in the station and at a hotel, while the train is delayed by fog.

The main action of the story follows a couple of threads. One is mainly centered on the group’s host, Max Adey, who is thought by his friends to be interested in one of their number, Julia Wray, and who has abandoned his current lover, Amabel, to run off to France with Julia and a few other friends: Clair and Robert Hignam, a married couple; Alex, Evelyn (or Evelyna) Henderson, and Angela Crevy, who is not quite part of their set, but who perhaps is also of interest to Max. Amabel, realizing what Max is up to, manages to track them down and attach herself to the party. There is a lot of time spent inside the rather shallow heads of the characters, their various insecurities, Julia’s interest in Max matched with a fear of his sexual advances, Amabel’s manipulative nature and her half-desperate, half-knowing sensuality, Angela’s feelings of inferiority as an outsider.

Another thread revolves around Clair’s maiden aunt, Miss Fellowes, whom we meet first, picking up a dead pigeon and for some reason cleaning it. She is at the station to see her niece off on her trip, but she falls suddenly ill – or perhaps she has drunk too much? – and she spends most of the book in a hotel bed, attended off and on by a pair of nannies and by the women of the party. And there are a few scenes among the servants of the travelers, stuck in the station while their employers have retreated to the relative comfort of the hotel.

There are a couple of striking set pieces, most notably an extended scene of Amabel taking a bath. There is an ongoing somewhat comic, and never really explained, series of scenes involving a curious man who seems unusually interested in Miss Fellowes, and who speaks in an ever changing set of accents. Another subthread concerns “Embassy Richard”, an acquaintance of theirs who has got into a bit of trouble over his habit of showing up at parties, even state parties, uninvited. All this is often quite comic. Somehow, though nothing quite terrible happens, and though the tone is, as I said, often comic, there is a sense of darkness to things. Partly it’s just the fog. Partly it’s that this is a set of awfully spoiled and shallow privileged young people – though there is no real sense that they are any worse than other people, just not any better either, and with less excuse for their shallowness and insincerity and insecurity.


The prose, as I’ve noted, is loose (in a good way), flowing, constantly shifting. It’s a very interesting novel, fascinating despite the shallowness of every character and the lack of real action or plot. It reads, I would say, true. I read Loving with much enjoyment several years ago, and I like Party Going – I shall soon, I think, be reading more by Henry Green.
Posted by Rich Horton at 8:29 PM