A Somewhat Forgotten Moderate Seller: The Man Who Got Away, by Sumner Locke Elliott

The Man Who Got Away by Sumner Locke Elliott 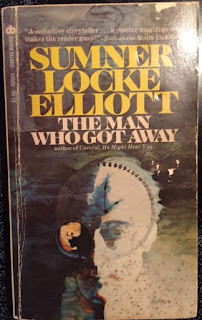 Here’s a book that probably wasn’t a bestseller, but might have sold OK. Sumner Locke Elliott was reasonably well-known, prominently published, had a a couple of books made into a movie. But he doesn’t seem that well known these days. (Jo Walton introduced him to me, and she writes of him as almost a private pleasure – a writer nobody else she knows has read.) 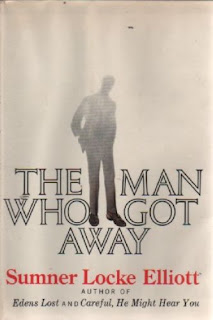 Elliott was born in Sydney, Australia in 1917. His mother, also a writer, Helena Sumner Locke, died from complications of his childbirth, and he was raised by his two aunts, who fought a bitter custody battle (lightly fictionalized in his first novel, Careful, He Might Hear You). He was a fairly successful playwright in Australia until after the War, when he moved to the United States, and became a prominent writer of teleplays during the “Golden Age” of live television, the ‘50s. In the ‘60s he turned to novels. He was also a closeted gay man, coming out only with the publication of his last novel, Fairyland, a year before his death in 1991.

The Man Who Got Away, from 1972, is arguably SF, which is why I chose to try it. In the end I think it qualifies as an interesting borderline case that I think I’d call not really SF, and the reasons for that might be illuminating.  As a counterexample, I’d consider Martin Amis’ Time’s Arrow, which has a somewhat similar premise, SF, just on the other side of that fuzzy border.  Here’s why, quickly: in The Man Who Got Away, the SF premise is entirely an enabling device, a narrative construct, used to propel the novel backwards in time.  It could have been told in a series of flashbacks, though I think that Elliott’s choice is much better.  Also, nothing is made of the SF device, either “actually” (there is no suggestion that this experience is useful or repeatable) or metaphorically.  The arguments pro-SF would say, I think, that for all that Elliott makes his SF device “real”: the narrator really =does= disappear from “present-day” life, with no other explanation possible.  And, pro-SF, there is one bit of Sfnal frisson, one place where something happens that is outside the realm of “narrative device”.  Nonetheless … In the case of Time’s Arrow, contrariwise, I would argue in favor of SF mainly because of the real metaphorical use Amis makes of his backward in time narration: mainly the Nazi Doctor bringing his “patients” back to life.  I could certainly understand an argument that suggested that all the tricks in Time’s Arrow are just as much “narrative devices” as those in The Man Who Got Away, though.

The Man Who Got Away is rather interesting, but to my mind not quite successful.  It opens with a chapter from the POV of Ruth Wood, whose husband, George, just disappears one day.  Then the novel proper starts, from George’s POV, from the time of his disappearance.  He soon realizes that he is experiencing significant events in his life backward in time.  At first he seems to be a moderately successful, moderately happy, somewhat rich, somewhat likable, guy, a television writer/producer.  As we move backward in time, we realize that most of this is outward appearance: he’s not very happy at all, he’s not all that successful, and if outwardly likable, he’s really an incredible asshole.  He’s also tormented by mysterious events in his past: his bitter relationship with his mother, his broken friendship with the actor Archer Cook, and his hatred of the poet John Citadel.  As we go back in time we get more evidence of George’s worthlessness, and failure, and more hints of the reasons.  All is finally explained in the end, but not in a way that, for me, justified George’s failings. (Which I should say may be exactly what Elliott intended.)

This is a very well written novel, and readable, and absorbing, but it didn’t quite work for me.  I had two main problems: 1) the main character is an irredeemable jerk, and it can be hard to put up with that for the length of a novel, and 2) the eventual “explanations” were a bit shallow, and anti-climactic, and unconvincing.  Also, George’s childhood seemed almost wholly disconnected, culturally and economically, from his later life, and the accompanying picture of American life in the '30s doesn't convince.  I’m tempted to suggest an Aussie not “getting” the US, in some way -- although he does better with the '50s  and '60s (when, of course, Elliott lived in the US). Still, as I say all that, from the perspective of nearly 20 years, I still remember the book, and I still think it intriguing, with a few moments of real beauty. So my first reaction may have understated its value a bit.