A Largely Forgotten Ace Double: The Games of Neith, by Margaret St. Clair/The Earth Gods are Coming, by Kenneth Bulmer

Here's an Ace Double featuring a couple of authors I've discussed before. I bought it partly because of that -- both writers have proved enjoyable in the past, St. Clair often more than that, and, partly, frankly, because of the quite gorgeous Emswhiller cover on the St. Clair book, which for some reason reminded me of Wendy Pini's cover for the June 1975 Galaxy. 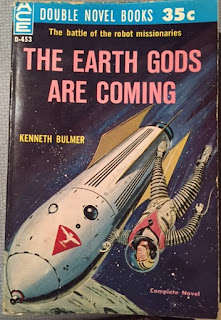 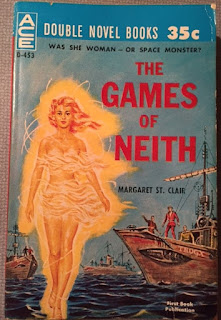 I wrote before about Margaret St. Clair (1911-1995) as follows: "she was one of the more noticeable early women writers of SF, but somehow her profile was a bit lower than those of C. L. Moore, Leigh Brackett, and Andre Norton. Perhaps it was simply that those writers did just a bit more, and were just a bit better (taken as a whole) than her, but it does seem that she's not quite as well remembered as perhaps she deserves. One contributing factor is that she wrote some of her very best stories pseudonymously, as "Idris Seabright". 20 or so of her 50+ short stories were as by Seabright, including some of the very best (such as "Short in the Chest" and "An Egg a Month from All Over"). She also wrote 8 novels (four of them published as Ace Double halves). Her career in SF stretched from 1946 to 1981. Her husband, Eric St. Clair, was also a writer (of children's books), and the two became Wiccans more or less when the Wiccan movement started."

Reading this book made clear to me another reason St. Clair is not as well remembered as Moore, Brackett, or Norton -- she was much weaker at novel length than at shorter lengths. At least, that is, based on those I've read. The Games of Neith was a terrible disappointment to me -- it's really just a bad, silly, book.

It's set on Gwethym, a planet colonized by a mix of Chinese, Norwegian, and French settlers, who seem to have been united by belief in a god named Jovis. But now, a long time later, they have adopted belief in an avowedly made up goddess, Neith. The main character is Anassa, the chief priestess of Neith. Her lover is the physicist Ehr-Li Wan. There have been recent problems -- rumors of a place in the ocean (this is a mostly water world) where people lose energy and seem wholly listless; and also a renewal of belief in Jovis, and especially in human sacrifice. A couple of attempts have been made on the life of Anassa, some thwarted by her cyon, a dog-like creature native to Gwethym.

Wan has learned that the energy loss phenomenon might be explained by a leak of energy from our universe to a parallel universe, caused by the use of the space warp to travel between planets. He believes there is a leak, located on Gwethym, near where people have reported listlessness, and further he believes the Old Ones, who formerly lived on Gwethym, had a way to stop the leak. He convinces Anassa to accompany him.

And so it goes, in an oddly episodic fashion. (One wonders if St. Clair had a hard time plotting at greater than novelette length.) They find the Old Ones' material, but also learn some horrible things about their predecessors on the planet. They somehow manage to bring a creature from another universe onto Gwethym -- she manifests as a goddess, and is immediately taken as the true Neith. There is an incident with human sacrificers, and with other nasty people, including a corporate type who doesn't want the space warp blamed for the energy leak. There is the mystery of where the Old Ones went (you'll guess the answer). And finally there is a wrenching decision to do with the various consequences of actually stopping the leak once and for all (one consequence being cessation of all space travel).

As I said, it's terribly episodic, and not in a good way. The science is ridiculous. The plot is a string of convenient happenings. The prose is fine, and the characters are OK. But as a novel, it's a disaster. But don't give up on St. Clair -- her shorter work is often very good.

Kenneth Bulmer, born in England in 1921, was a very prolific writer from the early '50s, under his own name and many others, most notably "Alan Burt Akers", the name under which he wrote the Dray Prescot series for DAW. He was primarily an SF writer, but also did a lot of work in other genres. He was editor of the New Writings in SF anthology series after the death of John Carnell. He died in 2005.

I've read a few of his novels, and they tend to be competent adventure fiction, but not at all distinguished. The Earth Gods are Coming is more or less typical of his work. It opens with a man charged with releasing one of the Prophets of Earth over another planet. These are androids who deliver the message of the rational and peace-loving Earth religion to other planets. However, the man is accidentally ejected from his spaceship with the Prophet, and rides it down to the surface.

Then we switch back to Earth, where Roy Inglis, a Space Marine officer stuck in a desk job after his marriage to a rich woman, is suddenly recalled to service. It seems there have been encounters in deep space with inimical aliens, who attack ships without warning. They are dubbed the Evil Ones, and Roy is sent on a fishing expedition hoping to find them. He finds this a relief in some ways, as his marriage is unhappy.

Roy's ship is attacked as well, as they reach a distant planet. He and a few others manage to reach the surface -- again, this planet is a water world, in which the intelligent aliens live in floating cities of ships. After some time desperately surviving in their barely seaworthy lifeboat, they encounter the aliens, who welcome them aboard. By now Roy and a lovely lieutenant are making eyes at each other -- just in time for an interlude on Earth where we see his wife jumping at the chance to divorce him on the presumption that he's been killed. Then a mysterious alien spaceship descends projecting hypnotic messages, and both the humans and the natives of this planet are brainwashed into worshipping the "evil ones". What if they are captured? The Evil Ones will easily learn Earth's location...

Luckily, rescue is on the way. But what can overcome Roy's brainwashing? And what about when the Evil Ones return? Well, remember how the story opened ...

I kind of enjoyed myself reading through the book, even though it's kind of implausible and silly. And one does have to wonder, what's the difference between the Evil Ones mission to various planets, and the human "Prophets of Earth"? In the end, another fairly weak book.