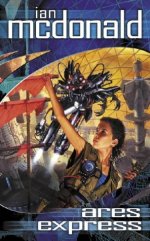 Once again, I’ve nothing new ready to write about, so I’m dipping once more into by backlist of reviews. As I am right now reading Ian McDonald’s latest novel, Luna: New Moon, I thought I would highlight one of his earlier novels, possibly my personal favorite among his books. This isn’t to be read as disparaging such novels as River of Gods and The Dervish House, which are also wonderful. But Ares Express is the novel of his that I think is most unjustly neglected. It was first published in the UK in 2001 but as far as I know it didn’t get a US edition until 2010.

Ares Express is a long, adventure-filled, extravagantly colourful, often funny, quite moving, highly imaginative, excellently written, story, set on a glorious Mars built partly of sharp-edged Kim Stanley Robinson-style extrapolation, but mostly of lush, loving, Ray Bradbury-style semi-SF, semi-Fantasy, Martian dreams. McDonald has visited this Mars before -- it's the setting of his first novel, Desolation Road, and indeed his first published story, "The Catharine Wheel", is set in a slightly different version of this setting, and even shares some characters with Ares Express. I thought this book perhaps the most delightful "read" of 2001.

The main character is an 8 year old (nearly 9) girl with the beautiful name Sweetness Octave Glorious Honey-Bun Asiim Engineer 12th. The 8 years of her age are Martian years, making her on the order of 16 Earth years old. She is the daughter of an Engineer of the huge train Catherine of Tharsis, and she wants nothing more than to inherit her father's place as Engineer. But in the strict society of the Martian trains, girls don't drive. It is time for her to marry, and soon a marriage is arranged with an eligible boy of the Stuard clan of another train -- with a stainless steel cookware set waiting for her at her new home. So, Sweetness impulsively decides to run off in the company of a despised boy of the trackbuilding Waymender clan. This will lead to her family's disgrace in train society, and as she soon learns, it may lead to her death as well.

Sweetness and Serpio Waymender strike across the desert, aiming for the haunt of a man named Devastation Harx, the leader of a mail-order religious group that has ensnared the persecuted, handicapped Serpio. Serpio can "see" Sweetness' secret companion, the spirit of her dead twin that she calls Little Pretty One. But when they find Devastation Harx on his huge airship, Sweetness learns that she has been betrayed -- Little Pretty One is something quite different than she had known, and Devastation Harx covets her twin for the power she can give him over the "angels" (AI's) which control the Martian climate, and, indeed, reality itself.

So Sweetness finds herself again on the run, trying to find Devastation Harx and reclaim her twin and save the world. At the same time her redoubtable Grandmother Taal has decided that family is more important than the rules of train society, and she has left the train to look for Sweetness. Add in a group of anarchic performance artists and comedians, a dream artist, a man who can cross the various alternate realities of Mars, and many more wonderful characters and landscapes, and you have the enchanting melange that makes up Ares Express.

McDonald plays archly with the idea that this is a "story", as Sweetness keeps telling herself, and occasionally uses this as license to provide neatly plotted but highly coincidental encounters and rescues for our heroes. And he has great fun with the idea of using some notion of quantum computing to maintain the "reality" of this glorious "manformed" Mars -- at the same time this is quite fun but somewhat subversive of the SF basis of the story -- so that it occupies a sometimes uneasy perch between all-out Fantasy and nominally plausible Science Fiction. But if, at times, this stretches the reader's willing suspension of disbelief to the point of severe strain, at other times it works to add delight, as with the beautiful trip, late in the book, through a series of alternate Marses, including of course those of Bradbury and Burroughs and others of the great SF chroniclers of the Red Planet. This may not be the most serious or the most significant of SF novels, but it is one of the the most fun. I loved it wholeheartedly.