A Not Quite Forgotten SF Novel: The Ginger Star, by Leigh Brackett

A Not Quite Forgotten SF Novel: The Ginger Star, by Leigh Brackett 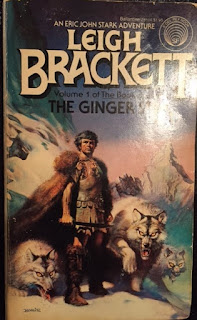 Leigh Brackett (1915-1978) was one of the greatest pulp-era SF writers. She began in Astounding in the February 1940 issue with “Martian Quest”. Throughout the ‘40s and to the middle of the ’50s she published a great deal of SF, much of it in the planetary romance subgenre. Right about 1955 – exactly as the pulp era came to an end with the disappearance of Startling Stories, Thrilling Wonder Stories, and Planet Stories – she slowed down. Only about a half-dozen further SF stories appeared, and no new novels – until 1974, and the book at hand.

To be sure, SF wasn’t all she did. She wrote crime novels – some quite highly regarded, though I haven’t read any. Most appeared in the ’40s, but her last, Silent Partner, came out in 1969. And she wrote screenplays, some in the ‘40s (most notably, The Big Sleep, with William Faulkner (and Jules Furthman)), but quite a few more beginning in 1959 with Rio Bravo, and continuing to such well-known movies as Rio Lobo and The Long Goodbye. Her final credit, perhaps the most famous of all, was The Empire Strikes Back (though by most accounts much of her screenplay was gone by the time the film was released). It seems likely that the screenwriting was what drew her away from SF.

Her husband was Edmond Hamilton, one of the most celebrated writers of pure Space Opera. They almost never collaborated, except on a posthumous story, “Stark and the Star Kings”, which mixes Brackett’s most famous character with some of Hamilton’s most famous; and, most think, on the 1963 Ace Double The Secret of Sinharat/People of the Talisman, which is revised and expanded versions of two of Brackett’s Stark stories for Planet Stories – the generally accepted view is that Hamilton did the revisions. Brackett died of cancer in 1978, shortly after turning in the first draft of The Empire Strikes Back to George Lucas.

So … in 1974 she had been relatively inactive in the SF field for some two decades. The Ginger Star represented a return to the field. It was serialized in two parts in If in 1974, and published in book form by Ballantine/Del Rey. Two sequels, The Hounds of Skaith and The Reavers of Skaith, followed in 1974 and 1976. (Around this time she also edited two books for Ballantine/Del Rey that emphasized her Space Opera/Planetary Romance roots: The Best of Planet Stories Volume 1 (alas, there was never a second volume) and The Best of Edmond Hamilton.)

I adore the great Brackett stories of the late ’40s and early ‘50s, particularly The Sword of Rhiannon, one of the great pure planetary romances; and other stories in the same loosely developed future (though The Sword of Rhiannon is really set in the past): “The Halfling”, “The Dancing Girl of Ganymede”, “Mars Minus Bisha”, “Shannach – the Last”, for example. Other SF was also very fine, most notably The Long Tomorrow, a post-Apocalyptic novel; but also The Big Jump and The Starmen of Llyrdis. Her slightly later story from Venture, “The Queer Ones” (aka “The Other People”) is excellent, and not terribly well known. The Eric John Stark stories fit into her Mars/Venus/etc. future – and they are quite enjoyable as well. Stark is portrayed as a nearly savage man, raised as an orphan on Mercury, and rampaging through Venus and Mars in the most prominent pieces.

The Skaith novels feature Stark as the protagonist, but they are set on a planet in another Solar System, Skaith. I had assumed that she set them there because the Mars and Venus of the earlier stories was no longer astronomically plausible, and perhaps that is the case, but it should be noted that in these books she does still portray Stark as a native of Mercury – also a highly implausible thing. Anyway, I had ignored the Skaith novels until now partly because of a feeling that they would be pale latter-day imitations of the earlier stories, weakened by the forced relocation. And to an extent I think that’s true enough, though The Ginger Star is still fairly fun.

Eric John Stark comes to Skaith as a somewhat unofficial representative of the Galactic Union. His mission is mostly personal: his mentor, sort of adopted father, Simon Ashton, has disappeared from the chief city of Skaith, and foul play is suspected. Skaith, an ancient planet turning colder as its Sun dies, is ruled by a shadowy group called the Lords Protector, via the Wandsmen, who control most of the city states, largely by a sort of bread and circuses policy whereby the shiftless “Farers”, or it might be, “welfare cheats”, leech off the productive citizens. Stark more or less randomly begins to look for Ashton, and finds hints that he may be in the harsh North, perhaps at the mysterious Citadel of the Lords Protector. He makes an enemy of the local Wandsman, and then heads to Irnan, another city where a faction is trying to get passage via the Galactics to another planet, to escape the rule of the Lords Protector. There he assists in the beginning of a rebellion, and finds himself declared the subject of a prophecy, that a “Dark Man” would come to bring people to freedom. That the prophecy is delivered by Gerrith, a beautiful and tough Wise Woman, who insists on accompanying him in his journey to the North, is only a bonus.

Stark continues north, meeting with treachery at almost every turn, and with further prophecies. But it is clearer and clearer that he is coming closer to Ashton, and to the Lords Protector, whom he (somewhat reluctantly) sees as his responsibility to unseat. And, too, the only way out seems to be through. His increasing feelings for Gerrith are a factor as well. So we get to a final confrontation with the mysterious Lords, and to a meeting with Ashton … and then … well, it’s the first book of a trilogy, and so it stops. It’s pretty clear that the story set up at the beginning will take all three books to resolve.


There’s a lot to like here. The various different peoples, all varieties of human, some more mutated than others, are pretty cool. Stark is Stark, though a bit different – more thoughtful, I suppose – than in the earlier stories. There’s the usual tough guy attitude, and when needed, action and violence, though often enough Stark is the victim and not the perpetrator. It was – I guess – OK, but as I had feared, just a bit thin, and bit less emotionally intense, than the Martian stories. And Skaith comes off as a cliché – a somewhat pale imitation of a ‘40s pulp milieu. Still, not bad – but not the true quill Brackett … for that, go to The Sword of Rhiannon!

(A note on my edition, shown above -- this is the second edition, from 1979, with a Boris Vallejo cover. The original cover from 1974 is by Jim Steranko, and to my mind it is much better, with a depiction of Stark much closer to my image of him.)
Posted by Rich Horton at 7:05 PM