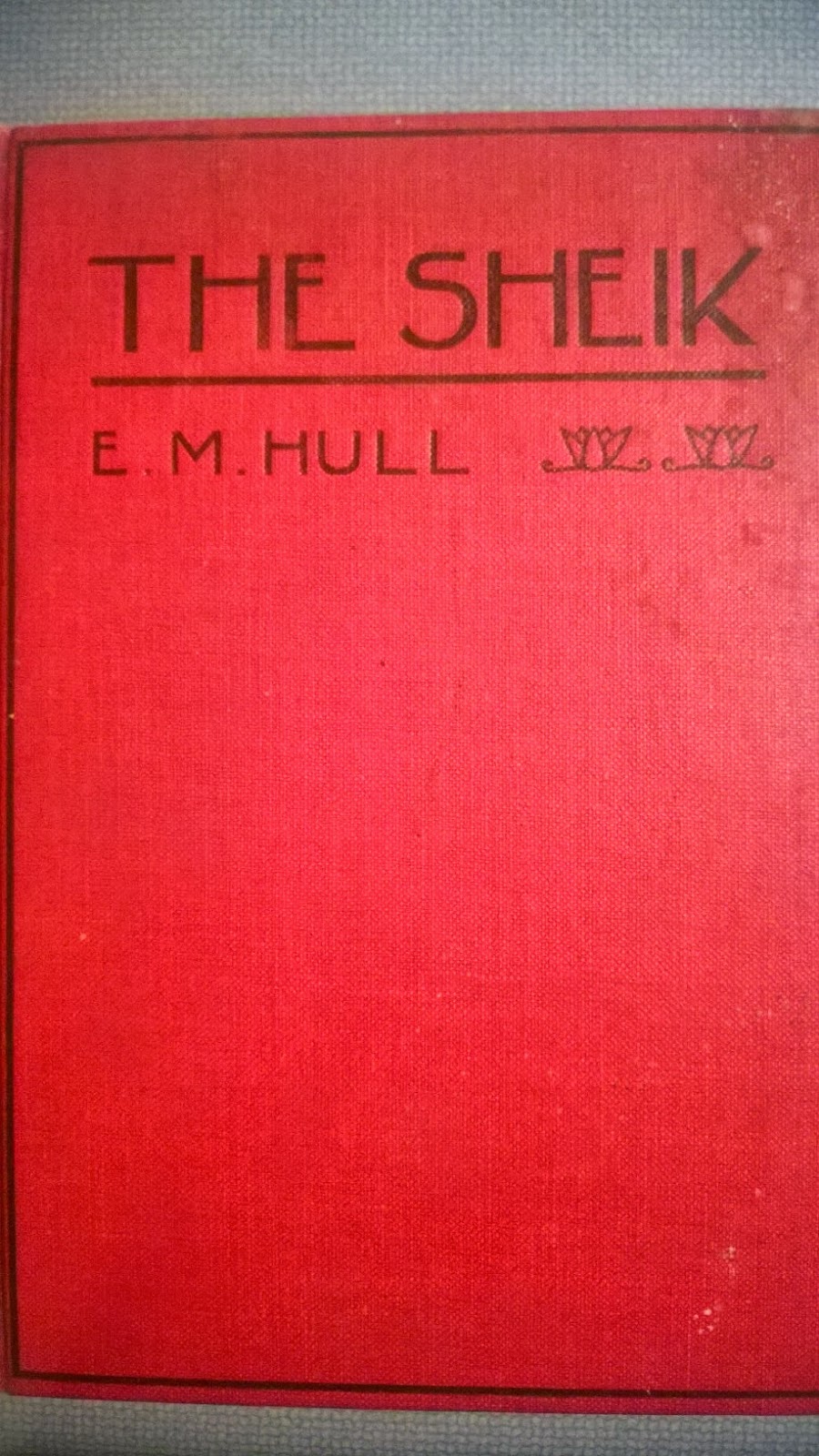 The Sheik is still a somewhat famous and also somewhat notorious novel. Partly this is because it became a film starring perhaps the most famous romantic male lead of the silent period, Rudolf Valentino. (Along with another 1921 film, The Four Horsemen of the Apocalypse, The Sheik established his reputation and persona.) It's also famous ... or notorious ... because it is an astonishingly sexist novel. It is sometimes considered the first novel in the "Romance" category (Georgette Heyer's first novel appeared two years later); and it introduced perhaps the least savory of Romance tropes: the woman who needs to be raped to teach her a lesson, and who then falls for her rapist.

The author was born Edith Maude Henderson in 1880 in London. Though as far as I can tell she lived her whole life in England, her father was American and her mother Canadian. They traveled widely however (her father was a shipowner), and so did young Edith. She married Percy Hull in 1899. During the first World War Edith began writing fiction. The Sheik was her first published novel, appearing in 1919. She published several further novels, including a sequel to The Sheik (The Sons of the Sheik). She died in 1947.

I'll present a brief quick review of The Sheik, followed by some more detail which will include spoilers for The Sheik as well as perhaps P. C. Wren's Beau Sabreur.

The Sheik concerns a very rich young woman named Diana Mayo, who has been raised from birth by her cold fish of a brother. Accustomed to having her own way, and uninterested in men, she decides to take a trip through the Sahara while her brother heads to the US to find a wife who wants his money enough to put up with his selfish ways. However, she is betrayed by her Arab guide, who allows her to be kidnapped by a Sheik, Ahmed Ben Hassan. Ahmed makes his intentions clear, and despite Diana's expressed hate and fear, has his way with her again and again over the ensuing days.

Months pass as Diana's feelings change, and a few crises follow: an escape attempt, a meeting with a French friend of the Sheik, and Diana being kidnapped again by another Sheik, this one gross and evil ...

Well, it's obvious enough how it all works out. There is one slight (but all too predictable) twist, that I'll mention later. And what did I think of the book? In the first place, the rape plot is truly objectionable ... I don't really get people that defend the Sheik's actions. You can certainly argue that Diana was a stuck up prig, and that her privilege and her unconventional upbringing had led to certain emotional issues which were not healthy. But to suggest that the proper cure for that would be kidnapping and rape -- repeated rape, over months -- is simply sick. Besides that, the book is quite overtly racist in its treatment of Arabs. And finally, it's poorly written. The prose is bad, the pacing is off, Hull's paragraphs are too long (a nitpick, I know), and perhaps most importantly, the romance really doesn't convince, at least not from Diana's side. I suppose I could believe that the Sheik was truly falling for Diana, against his will (he prefers to regard women, especially English women, as disposable), but Diana's sudden realization that she is in love with the Sheik just seems pasted on. Also, though it's obvious that lots of sex (sick as it may be) is occurring, none is described, and quite frankly some more explicit description would have helped (though probably not enough).

A few more details about some additional, spoilerish, points of annoyance after some spoiler space ...

It's fairly obvious that the book's depiction of Arabs is racist, but it's made still worse in that the "good" Sheik, our hero (you know, "good" despite being a kidnapper and rapist) turns out to be actually European in ancestry -- with an aristocratic English father and a Spanish mother ... the same trick, more or less, features in P. C. Wren's Beau Sabreur.

I might also note that the producers of the movie version felt that the rape aspect was too controversial, so it was eliminated. (There were complaints from the book's readers.)

And finally, it seemed possible to me that there was a hint of strange incest in Diana's relationship with her brother, particularly in that he doesn't seem to like women at all, and that Diana is described as having a "boyish figure" and as often dressing in mannish clothes. If Hull had intended that, and had the skill to pull it off, it might have added some psychological interest ... but I think I'm overinterpreting.