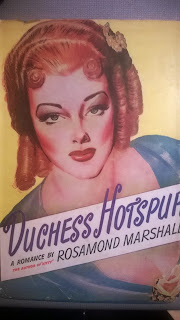 Rosamond Marshall was a popular writer for both children and adults. She was born in 1902, but her first novel (for children) did not appear until 1942. Her first adult (for its time, very adult) novel, Kitty, appeared the next year. For the rest of her life (she died, quite young, in 1957) she produced books in both categories. By repute, her adult novels, especially Kitty, sold very well, particularly in paperback. (There is a certain cultural judgement inherent in that statement as applied to books from the '40s, when paperbacks were still new and quite declassé.) Wikipedia knows little about her: she was American-born, briefly married to an Italian man and lived in Rome, later married Charles Marshall, over the last several years of her life split her time between Southern California and Vancouver. (Oh, and there is some controversy over her birthdate: perhaps she was born as early as 1893).

The back cover of my edition of Duchess Hotspur has more details: born in New York City, grew up in England, educated in France, Austria, Germany, and Italy, including some time at the Sorbonne. Spoke English, French, Italian, German, and Piedmontese (an Italian dialect, I presume?) Wrote extensively for foreign language papers, and published a number of adventure novels under pseudonyms. Also was an experienced moutain climber, being the first to break new trails to the tops of at least 22 mountains, with one Alpine peak that she was the first to scale named after her. Pretty impressive, really.

Kitty was made into a somewhat popular movie with Paulette Goddard and Ray Milland. Her last novel, The Bixby Girls, was also made into a movie.

Duchess Hotspur was published by Prentice-Hall in 1946. My edition is the Fifth Printing, and the dustjacket flap claims over 100,000 copies in print, so this book must have sold quite well itself. It's a romance novel set in 1771 or so. The title character is named Percy, Duchess of Harford, called Duchess Hotspur sometimes. (She is apparently so named as she is a descendant of Henry Percy, called Hotspur, probably best known these days for his somewhat innacurate depiction in Shakespeare's Henry IV, Part I.) She is Duchess in her own right, though she had to win a court case against her odious cousin Sir Harry Cunningham to confirm that. (I'm not sure if it was possible at that time for a woman to be in the House of Lords?) She is a widow, having eloped at 16, but her husband died on their honeymoon and since then she has had a string of lovers, but no one who has held her interest.

Meanwhile Thomas Ligonier is a poor journalist, hoping to attract investors to start a newspaper. He makes enough money to live on from freelancing and from modeling for a sculptor friend. One day the Duchess barges into the sculptor's studio to complain about some work he did for her, and sees Thomas, nude ... and falls hard for him, and he for her. Before long she has thrown over her current lover and is sleeping with Thomas.

Thereby runs the conflict ... can she stay with him? He is lower born than a Duchess (though not a peasant: his father is a clergyman, and he went to Oxford: seems like gentry, but not nobility). She is controlling (for example, she wants to gift him the newspaper) while he wants to earn his way. (And to rule his wife, as men were expected to do.) And what about their pasts? Thomas (presented as a rather implausible paragon) is apparently the one true passion of at least two other women, while the Duchess' string of noble lovers is quite jealous of her new paramour. And what of her evil cousin, who still has designs on the Dukedom?

We see some interesting details on the newspaper business at that time, as Thomas does successfully found a paper. And there is a bit of society life. And lots of sex, not explicitly described but clearly going on all the time. (Including some slightly kinky stuff, especially with one of Tom's former lovers, who discovers a taste for being beaten when she takes up with a new man.) The true action of the novel takes a while to start, but it gets pretty exciting towards the end, when the bad guys (especially Sir Harry) move against Tom. The ending is a bit flat, partly because of a bit of a deus ex machina aspect. It's not a particularly good novel, but after a slowish start it does hold the interest, and I can see why it might have sold well. The sex was probably a factor: tame by today's standards, but I gather pretty racy for the '40s. (One contemporary review I found on the Web all but accused Marshall of copying Kathleen Winsor's famous Forever Amber in that aspect, from two years before, which seems a bit unfair to me because while Forever Amber predates Duchess Hotspur, Marshall's Kitty predates Forever Amber, and as I understand it Kitty was full of sex as well.)
Posted by Rich Horton at 6:28 PM