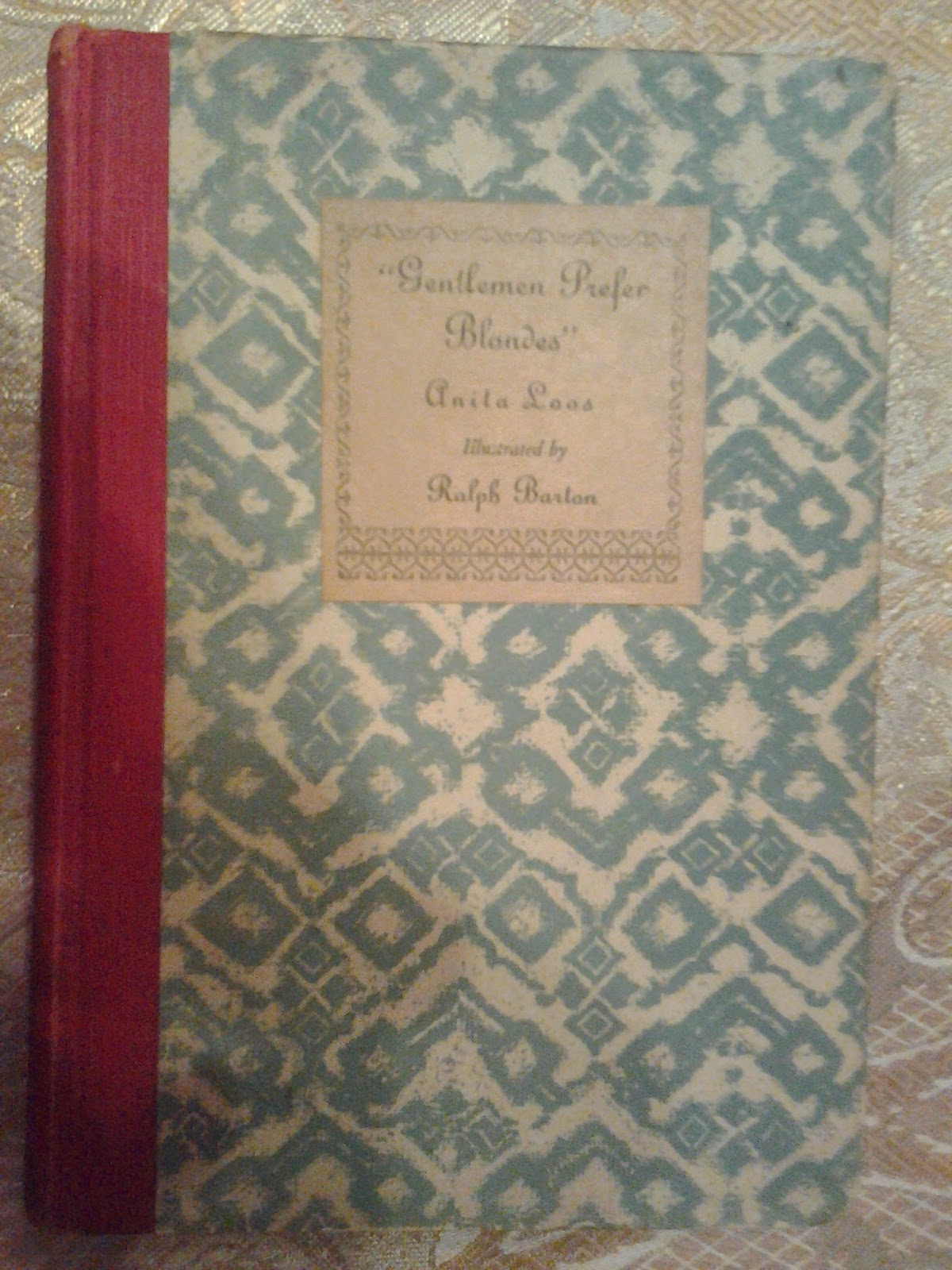 Gentlemen Prefer Blondes is certainly not forgotten, but I think it's fair to say that much of its fame nowadays rests on the 1953 movie version starring Marilyn Monroe, and perhaps on one song from that movie (and originally from the 1949 Broadway musical the movie was based on): "Diamonds are a Girl's Best Friend". The novel that the musical (and then the movie) was based on, by Anita Loos, is not out of print, but until a very recent (February 2014) new edition it had not been reprinted since 1998. Which to be sure is still not bad going for a 1925 book.

This was the bestselling (or perhaps second bestselling) American novel of 1925/1926 (the same year The Great Gatsby appeared). It was based on a series of sketches for Harper's Bazaar. The author, Anita Loos, was primarily a writer for films, and a very successful one. She was born in California in 1889, and grew up in a performing family -- she was on stage from an early age, but apparently always wanted to write instead. She began writing for the movies in 1911 -- her first scenario to be produced starred Mary Pickford and was directed by D. W. Griffith. She wrote the subtitles for Griffith's second most famous movie, Intolerance. Perhaps her most famous credit was for The Women, the 1938 George Cukor film starring Joan Crawford, Rosalind Russell, and Norma Shearer.

Her personal life was a bit fraught, mainly because of her second husband, John Emerson, who collaborated with her on many of her screenplays. It seems that he began as a full collaborator, but that in later years largely simply took credit for Loos' work. He was also constantly unfaithful, and mishandled their money. Eventually he was diagnosed with schizophrenia. He died in 1956. Loos had more or less retired from film writing by then, and spent the last few decades or her life (she died aged 92 in 1981) writing for magazines, and producing a couple of memoirs, and serving as a conspicuous light of New York society.

Gentlemen Prefer Blondes is subtitled "The Illuminating Diary of a Professional Lady", though the dust jacket to the first edition reads "The Intimate Diary of a Professional Lady". It is the story, told in diary form, of a girl from Little Rock, Arkansas, who calls herself Lorelei. (Her last name is given as Lee in the  movie -- I confess I don't recall seeing it specified in the novel but I may have missed it.) She left Little Rock, we learn later, partly because she killed a man (she was acquitted, either because the Judge and jury were smitten by her or because the guy deserved it, or more probably both). She has spent some time as an actress in films, but these days she mainly spends time with rich men such as Gus Eisman, "the Button King of Chicago". Sex is never directly mentioned in the novel, but the reader certainly assumes that that is her "profession".

She and a friend, Dorothy, who is a bit more intelligent (at least overtly) and conventionally moral than Lorelei, travel to Europe, where they meet a variety of men of weakish character but plenty of money. We see London, Paris, and Vienna (where she meets a certain "Dr. Froyd"). Eventually of course they return to the States, where the two women, after a certain amount of suspense, end up married, if not necessarily terribly romantically -- Lorelei's interest, anyway, remains as described in the famous quote: "Kissing your hand may make you feel very good but a diamond bracelet lasts forever".

The plot of course is not the point -- the point is Lorelei Lee's voice, at once naive and very knowing indeed -- it's hard to pin down whether she is as ignorant as she seems or whether some of that is an act. The novel is quite funny -- the voice really is intriguing, if perhaps wearing read at too much length. (Possibly the original magazine form was the best way to read it.) Lorelei, while not exactly an admirable character, is likable and often unexpectedly acute. The novel was very well received when it came out -- not just in terms of sales (supposedly the first edition sold out in a single day), but critically. Famously, Edith Wharton called it "The Great American Novel", though in context it's obvious that Wharton, though she doubtless admired the book, was not entirely serious in that comment. James Joyce was also apparently an admirer.

The copy I have is a very early edition: the Fourteenth Printing (from June 1926) of the First Edition, published by Boni and Liveright. (Liveright are still the publishers, at least of the latest edition.) The dust jacket is gone from my copy, but otherwise it's in very good condition. This edition is illustrated in a very 1920s fashion by Ralph Barton.
Posted by Rich Horton at 10:03 PM