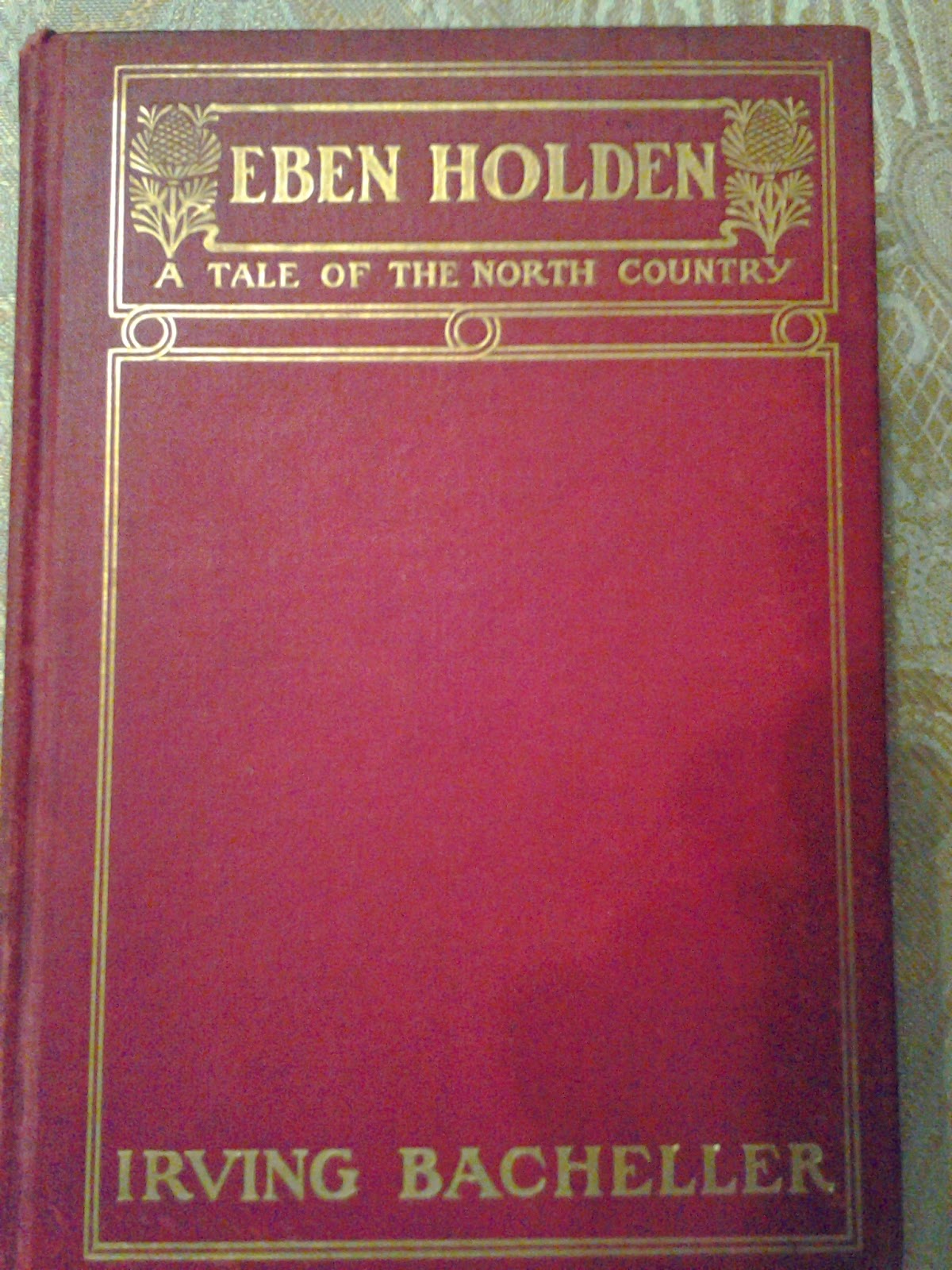 Eben Holden: A Tale of the North Country, by Irving Bacheller

Eben Holden is a novel from right at the turn of the 20th Century: it was published in 1900, and was (according to Wikipedia) the fourth best selling novel of 1900 and the fifth best selling novel of 1901. My copy, found as usual in an antique shop, was the 12th printing of the first edition, and was issued March 2, 1901. Lots of detail on that page -- apparently also there were 250,000 copies as of this printing. The publisher is Lothrop, out of Boston -- they also indicate what I assume is the printing shop, Norwood Press, Berwick and Smith, in Norwood, MA.

Irving Bacheller was born in 1859 in Pierrepont, NY, and lived to the age of 90, dying in 1950 in White Plains, NY. Pierrepont is in St. Lawrence County, in the far north of the state, and many of Bacheller's stories were set in the "North Country" of New York state.

Bacheller became a journalist and founded the Bacheller Syndicate, one of the first newspaper syndicates in the US. Through this syndicate he played a role in bringing work by writers like Rudyard Kipling, Joseph Conrad, and Arthur Conan Doyle to the US. He also worked with Stephen Crane. He resigned as Sunday Editor of the New York World to concentrate on his fiction about the time of Eben Holden, and the rest of his life was spent writing and supporting his alma mater, St. Lawrence College, and a college in Florida, Rollins.

Eben Holden is subtitled A Tale of the North Country. The book is not terribly long -- perhaps 80,000 words. It's the story, told late in his life, of William Brower, an orphan from Vermont who ends up adopted by a couple in a small village, Faraway, in St. Lawrence County. (This, or the nearby town called Hillsborough, is presumably modelled on Pierrepont. The only city name I recognized in the North Country parts of the book is Ogdensburg, which is a port on the St. Lawrence Seaway, so in Northwestern St. Lawrence County.) The title character, Eben Holden, is a hired hand on William's parents' farm who kidnaps the boy after his parents drown, to save him from being taken in by a dissolute uncle. The book opens (in about 1845) with the story of Holden ("Uncle Eb") and young Willie trekking from Vermont and across Lake Champlain and much of the top of New York to the home, more or less randomly encountered, of David and Elizabeth Brower. The Browers have a daughter, Hope, just a bit older than Willie, and an infant son, as well as an older son who ran off to sea and was lost off the coast of Van Diemen's Land.

The rest of the book is the story of Willie's childhood, his falling in love with words thanks to a local poet, and also his falling in love with his adopted sister Hope, followed by a spell in college and then a move to New York City to get a job with Horace Greeley. The Civil War intervenes ... there are roadblocks, mostly self-inflicted, to his romance with Hope ... but for the most part it's a pretty straight path of triumph.

That bald description doesn't really do the book justice. It's true that there isn't much of a constructed plot (there are a couple of twisty little bits and a closing climactic revelation). And the book is a bit discursive and episodic. The infant brother is forgotten until he turns 11, when he apppears apparently just to get sick and die. And so on ... But, the book still holds the interest. The characters are presented quite well, if they are a bit romanticized. Indeed, one of the best things about the books is the occasional thumbnail descriptions, as it were, of local people. (There are a couple of famous people depicted as well, most notably and at greatest length Horace Greeley, but for example there is also a quick meeting with Abraham Lincoln.) Bacheller's writing is plain and straightforward, but in a good way. The conversations are in the local dialect, and for once I found it convincing and effective.

It is at heart a story of the forming of America, and the American character as it was seen in those days (or perhaps more precisely the Yankee character). Eben Holden, to the plot, is an important secondary character, but to the theme he is central: he is fond of homespun philosophizing, and his stories and morals are nicely told, often funny, sometimes sharp (and sometimes a bit trite). This isn't a great novel, and there is a definite strain of overidealization, of oversentimentalism, to some of it. But it is a decent novel, and those shortcomings are balanced by a bit of -- not cynicism but realism -- that takes his characters down a peg on occasion. Bacheller is also capable of gentle comedy that doesn't seem forced or corny. And the depiction of the landscape, the way of life, and the general run of people in rural northern New England (or New York) seems spot on.

It does not seem to be a novel much-remembered these days, but it has been reprinted fairly recently, 1998, by Wordsworth Editions in a line they call Classics Library. I've seen these trade paperback sized books at remainder stores. So it's not completely forgotten. I was interested in what the original dust jacket looked like, and I found one entry with a picture at Abebooks (the book is for sale for $225!). Eben Holden Dust Jacket
Posted by Rich Horton at 8:13 PM