Review: Aliens From Space and Lost Race of Mars, by Robert Silverberg

Review: Aliens From Space and Lost Race of Mars, by Robert Silverberg

I continue my journey through the early novels of Robert Silverberg. These are both first contact novels, though otherwise they don't resemble each other much. (Though they both feature important characters who are Professors at Columbia, which was Silverberg's university.) Aliens from Space was published in 1958 by Avalon, as by "David Osborne", and has never been reprinted. It's definitely an adult novel, though a slim one at some 40,000 words. Lost Race of Mars was published in 1960 by John C. Winston. Between 1952 and 1962 Winston published many SF books aimed at younger readers -- the "Winston Juveniles", but this doesn't seem to be officially one of those. The Winston Science Fiction books were numbered -- there were 35 in all. Lost Race of Mars isn't labeled as one of those -- probably because it is aimed at an even younger audience, it's more of a middle grade book, and quite short at about 20,000 words. In 1964 it was reprinted by Scholastic in paperback, and was reissued many times. Both editions were illustrated by Leonard Kessler. 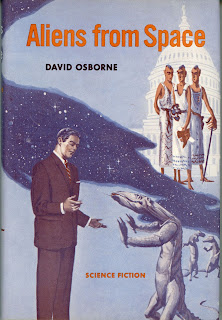 I mentioned that Aliens From Space was never reprinted. There is an ebook edition from Gateway/Orion, but that is only available in the UK. I ordered it through Interlibrary Loan, however; and I also tracked down an audio edition, part of a series produced by Blackstone called Galaxy Trilogy -- four volumes, each with three novels, all of them from the same period, mostly the 1950s, and most quite obscure. I listened to the audio version and as it finished, the library called -- they had my book! Which does help in writing the review!

It's 1989. Jeff Brewster is a Professor of Sociopsychology at Columbia (which was Silverberg's university.) One day he gets a call from a certain Colonel Chasin, from UN Security. He is needed in Washington immediately. Jeff complies, of course, even while wondering what they want with a mere 32 year old assistant professor ... As the title has already hinted, Jeff quickly learns that a spaceship has landed, with three aliens, from a very advanced species. The UN has decided to set up a multinational negotiating team, and Jeff has been tabbed due to his theories about communication.

I'll stop here to fill in the world situation. After Sputnik in 1957 (presumably when the book was being written) humans reached the Moon in 1959, Mars in 1968, and Venus in 1970. The Soviet Union collapsed in 1965, and the world is largely at peace, though the US and Russia remain the superpowers, and don't entirely trust each other. Also, in 1989, a really fancy lunch cost five dollars. But, hey, we can make all the fun we want of the missed predictions of SF in any era -- ours will do just as poorly, I'm sure!

Brewster learns that the aliens seem to have previously visited both Venus and Mars, based on artifacts -- with writing -- found there. But that was centuries or millennia ago -- not they are here. They are called Morotans, and they propose an alliance of friendship -- and they offer immense technical and scientific knowledge in exchange for the right to build a base in Antarctica, and an agreement to be their allies against the maximally evil (because reptilian, natch!) M/e/r/s/e/i/a/n/s Zugloorans. Brewster's academic understanding of nuances of communication, however, leads him to suspect the Morotans are a bit too eager for an alliance: but can the Earth risk defying them? He has an ally in the Russian scientist Pirogov, and a foe in the blustery American Senator Morris ... and then a Zuglooran ship lands in Russia, and quickly makes a similar offer to Earth.

The general shape of the resolution is fairly obvious, but it's also fairly honest and decent, so I wasn't disappointed. That said, the novel is really pretty minor work. Even though it's quite short, it still feels padded -- things like careful description of Brewster's morning routine at the opening, or of meals later on, are clearly there to get to the 40,000 words or so that make it saleable as a novel. There are other bits that are sheer cliché, such as the notion, often seen in SF, that humanity's short lifespan compared to certain aliens (those in this book live hundreds of years) will prove an advantage -- so, here, the aliens are shocked that the world they visited a few thousand years ago which had barely started living in cities now has space travel. There is really only one female character with any lines -- Brewster's wife Mari -- and she is really a cipher and a rather overtypical '50s wife. It's easy to see why Silverberg has not chosen to reprint this book, and it is not something I really recommend you hunt down, but, for all that, I enjoyed the quick read. Silverberg, from the very beginning, had that knack. 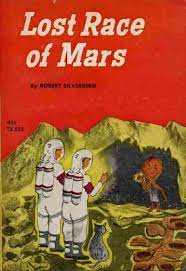 I'll consider Lost Race of Mars here just for convenience. I really am not, at my age, the audience for this book -- and I probably wasn't except at about age 10, when I discovered Silverberg's other Scholastic book, Revolt on Alpha C. (And even that book seems pitched a a slightly older age group than this one.) In this book, Dr. Chambers, a Professor of Biology at Columbia University (again!), gets permission to take his family to Mars to study the local flora and fauna. Alas, he won't be able to study the Old Martians, as they have surely gone extinct! Jim and Sally are 12 and 11, and they and their mother will accompany Dr. Chambers. When they get to the small colony of Mars, they find that they are greatly resented by the other members of the colony, because they are only going to be there for a year. But things improve when they fortuitously get to adopt a Mars kitten -- a new discovery. And then Jim and Sally hatch a foolish scheme to help their father -- convinced that there is more to see in the Old Martian ruins -- perhaps even Old Martians! -- they steal a Mars rover and go looking around ... with no success, until a dust storm kicks up, and they get lost, and their Mars kitten escapes and runs to a cave ... complete with, you'll never guess, Old Martians (who only allow themselves to be discovered because the kids are in danger and they seem to have treated the kitten well.) You can see where this is going ...

As I said, I'm not really the audience for this book. I might have loved it in 1970 when I was 10. Nowadays it's truly negligible -- for one thing, the didactic elements (sneaking in scientific facts (as of 1960) about Mars, mainly) are both out of date, and not really that interesting anyway. The plot is implausible and too rapidly developed (and even at that, it doesn't really get going until over halfway through the book.) This is one for completists only. But, hey, it is what it is, and it was adequate, I suppose, for its time, though I don't really think this age group was Silverberg's strength. (I do remember some of his books for older teens, such as Time of the Great Freeze and The Gate of Worlds, with great affection based on my reading at 12 or so.)