Today would have been Alice Bradley Sheldon's 106th birthday. I was surprised and disappointed to find that I haven't really written anything substantive about her ... I suppose because I read her complete works before I really began writing about SF. Not that that's an excuse.

Here's a brief review I published in Fantasy Magazine of Julie Phillips' exceptional biography. (The review is brief because that was the format for the magazine.) 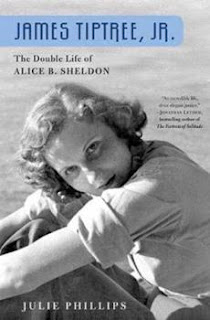 It has been said that the lives of writers are not terribly interesting – perhaps this is sometimes true (though less often so than some might think), but it is certainly not true of the life of “James Tiptree, Jr.”. This was fairly clear even when we did not know who “Tiptree” was, and when rumor and “his” letters spoke of much travel, intelligence work in World War II, a psychology Ph.D., and government work. Then we learned that “Tiptree”, famously an “ineluctably masculine” writer in Robert Silverberg’s words, was a woman, Alice Bradley Sheldon, and her story became even more interesting.

As Julie Phillips’s excellent biography makes clear, her story was still more interesting than we knew. Alice Bradley was the daughter of a very successful Chicago writer, Mary Hastings Bradley, who was also an explorer and took her daughter on three trips to the African interior. Alice grew up rather wild, tumbling into a disastrous first marriage at her debut. She was bisexual, though her affairs with women were generally short-lived – perhaps simply because she couldn’t bring herself to fully accept her Lesbianism – or perhaps because her rivalry with her mother (or something else) made her ever suspicious of women. She was fiercely intelligent, beautiful, and hard to satisfy. Besides worthy service for the U. S. military, she was a promising painter, a chicken farmer, a psychologist, a journalist, a writer for the New Yorker, and more. But above all, once she took her male pseudonym, she was one of the greatest and most original SF writers of all time.

Phillips’s book tells her life story with sympathy but also with a clear eye to her problems. It is also insightful as to the source of her SFnal inspiration, and quite strong in covering the literary value of the major stories and the novels. And it portrays very well the deep epistolary friendships “Tiptree” made with many SF writers, male and female. This is a moving life story, and an acutely written literary biography – a must for anyone interested in SF history.